Subbarao Overrules Panel View On Rate Action In May 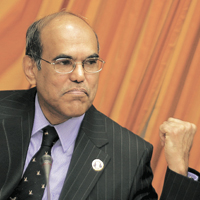 08 November, 2014
Print this article Font size -16+
Reserve Bank of India (RBI) Governor Duvvuri Subbarao went against the suggestion of a majority of external members of the central bank's monetary policy committee that recommended no change in the policy repo rate at a May 3 policy meeting, according to minutes of the meeting seen by Reuters.
The RBI cut the key policy repo rate for a third straight time in 2013 to 7.25 per cent, pulling it to a two-year low, in a bid to revive decelarating growth and taking into account benign inflation reading.
The committee consists of seven external members, apart from the governor and the four deputy governors. The panel's role is purely advisory, with the governor having the final say.
Four of the seven external members wanted the RBI to hold its repo rate at 7.50 per cent, citing concern over India's high current account and fiscal deficits.
Reducing the repo rate may not help revive growth, since low growth reflects impediments to investment projects through power, fuel, supply linkages, according to the four members who did not want a cut, the central bank's minutes of the technical advisory committee meeting held on April 25 showed.
The remaining three external members asked for a cut in the repo rate. Two of these members was also in favour of a 25 basis points cut in banks' cash reserve ratio, or the portion of deposits they have to maintain with the central bank in cash.
The third member suggested a cut in the statutory liquidity ratio, or the minimum amount of mandated government securities banks have to hold.
In January, Subbarao endorsed the unanimous recommendation of all external members of the bank to cut its policy interest rate for the first time in 9 months.