Stuck In The Pipeline 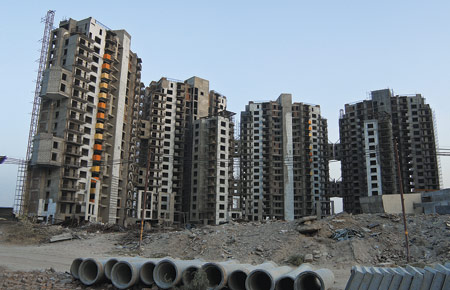 A slew of launches at discounted prices have made summer a busy season for builders. Or so they say. Delhi-based Unitech has been among the more active ones, with nearly a dozen new projects going on sale. In Gurgaon's Sohna Road, there is Uniworld Garden II and Uniworld Resorts. In Noida, it has launched Uni-Homes in Sector 117. The typical ‘affordable category' one-bedroom home costing Rs 2,500- 3,000 a sq. ft, is in the range of Rs 21-23 lakh — nearly 20-30 per cent below the July 2008 peak. Unitech MD Ramesh Chandra, claiming success with the new round of affordable housing projects, said the company had sold 4,000 units over the past two months, and is certain it would net another 20 million sq. ft over the next year.

To beat the slowdown, builders have been offering new financial packages that they say are luring buyers. Emaar MGF's luxury segment offerings, costing above Rs 2 crore, have an arrangement for the builder to pay the EMIs till the owner occupies the apartment, says Shruti Gupta, country head of Hamptons International, a property broking house.

Confidence seems to have returned and some developers have already announced price hikes of 5-10 per cent. Unitech, for instance, says it has upped prices by Rs 50 per sq. ft for its Uniworld Garden II and The Residency in Gurgaon. But are prices really going up or are these claims of price hikes aimed at drumming up a lacklustre market?

Playing With Prices
Those watching the property market are suspicious of builders' claims. Property brokers Knight Frank India's chairman Pranay Vakil says prices are still plummeting, and the hikes were only in projects that are nearing completion. "The Bombay Silk Mills residential project in central Mumbai, which will be completed in two months, is selling at Rs 13,000 a sq. ft compared to the booking rate of Rs 12,000 a sq. ft," he says.

Pankaj Kapoor, MD of Liases Foras, a property research firm, pooh-poohs claims of prices moving up. "Builders are playing a pre-scripted game. Most of these new projects are in remote locations and booking amounts of just Rs 50,000 or a lakh do not reflect actual sales when there are dozens of cancellations," he says. "Investors have taken positions in these projects, and the so-called price hikes are to facilitate their exit in favour of a new set of investors."

Liases Foras as well as Crisil Research, which has just released a property market survey, agree that average residential property prices have fallen around 30 per cent since the peak time of June 2008, and can further soften by 10 per cent by the end of the year. The Crisil survey, in fact, says prices in satellite towns — Faridabad in the NCR, HiTech City in Hyderabad and Rajiv Gandhi Salai in Chennai — flooded with over-supply might see a sharper fall.

However, while the residential market is expected to stabilise in the first half of 2010, commercial and retail property faced with huge supply in the pipeline, is expected to see a falling market — both in capital values and lease rentals — over the next two years.

Problem Of Plenty
It seems there is a pick-up in consumer activity in the property market, but buying is concentrated in the residential sector alone, and that too only in metros such as Mumbai. The paralysis in the office and retail segments continues. Simultaneously, projects launched 2-3 years ago are now ready for sale. This has created a general glut of stock that is reducing prices.

Despite claims of successful launches, the inventory of all big developers show large unsold stocks. For instance, a Merrill Lynch report on DLF reveals that in Gurgaon it had an unsold stock of 2.5 million sq. ft. "In Chennai, over 70 per cent of the new projects including DLf's land banks are located in Old Mahabalipuram Road and Sriperumbudur. DLF cut prices but still has 50 per cent of the inventory," says Vandana Luthra, analyst at Merrill Lynch .

The commercial property glut is even worse. DLF in Mumbai had bought the Mumbai Textile Mills investing Rs 700 crore for 17 acres of prime land. This ensures a potential supply of 3.6 million sq. ft of retail/mall and commercial space. The only problem is, other textile mills in the vicinity were also sold to developers, and are expected to bring in 10 million sq. ft of space over the next few months.

Vakil says the most blighted segment of the property market will be the commercial sector, which will see a supply of 163 million sq. ft. in FY 2010, against a projected demand of 132 million sq. ft.

Queing Up For QIPs
Builders have tried to solve the problem of mounting debt and poor cash flows by launching projects, and then using the initial instalments to complete projects and meet short-term debts.

But sales have not been too good. This has generated a queue of builders before the qualified institutional placement (QIP) window. It all started with Unitech raising Rs 1,620 crore in April, albeit at a discounted valuation, with the promoters selling around 13 per cent of their stake. "But it also showed the way that realty was still in demand," says Abhisheck Lodha, director of the Lodha Group. Buoyed by a successful first round, Unitech has closed a second QIP round raising Rs 2,800 crore. The proceeds will bring down its debt to around Rs 5,000 crore.

QIPs, a quicker way of selling equity to investors, suddenly became the summer fashion. Indiabulls Real Estate in mid-May raised Rs 2,585 crore through a QIP by selling discounted shares to overseas investors including TPG Capital and Fidelity. Since then, about 40 companies, most of them real estate or construction giants, have secured clearances from their AGMs to raise over Rs 60,000 crore through QIPs. These include Parsvnath Developers intending to raise Rs 2,500 crore, Sobha Developers Rs 1,500 crore, HDIL Rs 2,500 crore, Akruti City Rs 2,500 crore and construction group HCC Rs 1,500 crore (See ‘Qualified List').

But the irony is that the bull run that prompted these companies to go to the market turned against them. By the time these companies started their road shows and fund-scouting, their stocks had risen three-fold from December last year, and investors found them too expensive. It is also a case of too many suitors chasing too few investors.

The road show became a flop show. HDIL met lukewarm response during its Singapore sorties, and its Executive Director Sarang Wadhavan said the QIP was on hold till the market improved. GMR Infrastructure has formally pulled out, while Parsvnath and Sobha are believed to be facing heavy weather.

This has left builders in a bit of a jam. With monsoons settling over the country, sales will peter out as consumers take a break from home-buying. On the other hand, builders seem to have exhausted all the traditional routes to raising bridge funds — debt, private placement and QIPs. The only hope they now have is that when sales resume in the post-Dussehra festival season, the market would have turned for the better.