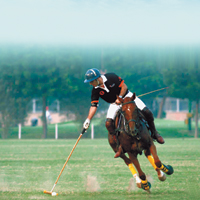 Indeed, there are two elite sports that would fairly shout luxury if they weren't so gentlemanly: golf and polo. While their following among the world's rich and powerful has never been in doubt, their ties with India are older than most of us know — one of the world's oldest golf courses and the world's first polo club is right here. And however old they might be, even today, both sports demand the attention they deserve — with sponsors and celebrities hooked to the sport — and yes the moolah too. Be it the coveted waiting list for golf-course membership or a member of the royal lineage playing the game of polo on a warm winter afternoon, the sports continue to attract the who's who of the country.

Polo: Royal reins
Let other people play at other things — the king of games is still the game of kings," says an ancient verse inscribed on a stone tablet at a polo ground in Gilgit, Kashmir. Dhruv Pal Godara, who has represented India at both national and international levels in polo for the past 13 years, mirrors that sentiment, "Being off the ground, and riding a horse at great speed with the spirit to win — well that's why I love polo and took it up as a profession," Godara says as he recalls India's historic fifth place finish at the 1995 Polo World Cup in Switzerland, with pride.

Always something of a royal bastion, the equestrian game is still enjoyed by sportsmen such as Yuvraj Vikramaditya Singh of the royal family of Kashmir, who owns and plays for the Kashmir Polo Team.

The game's elitist tag is not surprising. Well-bred Australian and Argentinean horses costing between $15,000 (Rs 7.2 lakh) and $40,000 (Rs 19.2 lakh) are hardly affordable. Additionally, professional players demand anything between Rs 50,000-70,000 per week, and there are seven months of polo-playing season. The polo season, best seen in Delhi, Kolkata, Mumbai, Jaipur and Hyderabad, stretches from October to April.

A high-maintenance sport, polo needs fine grounds. "Delhi and Jaipur both have well-maintained grounds, as do the Haryana Polo Club and the Cavalry Grounds in Jaipur," says Sunjay Kapoor, player and owner of the Sona Polo Team, in Delhi. "Argentina probably has the maximum number of grounds in any one country, though England, Dubai and the US too have excellent grounds for the sport."

Godara, however, is not too impressed with the state of the sport in the country. "India needs more investment in polo, both money-wise and in terms of time," he says. "We have talent but no support."

But the scenario might change with sponsors such as Tag Heuer, Volkswagen, Cartier and Chivas Regal entering the fray. "Traditionally, polo has been associated with high-end brands and it remains so today," says Kapoor. "In India, sponsorship has increased with the arrival of foreign luxury brands."

Sponsor and polo patron Chaitanya Sen, secretary of the Hyderabad Polo Club, whose company R.K. and Company has been sponsoring the sport for the past six years and who himself owns 40 horses, says betting money on the sport is worth it. "The networking is great and the win gives you a high. Plus, today with all the publicity and the glam quotient, the who's who of the country participate in the sport with full fervour. Polo, indeed is still a game for the elite."

Golf: Premium Club
The golfer's first virtue has to be patience. Waiting lists for acquiring membership to some of the premier Indian golf clubs can run to 20 years. And many of the world's best golf courses have ‘by invitation only' entry restrictions. For instance, the Augusta National Golf Club in Georgia, US, counts Bill Gates, Warren Buffett and Jack Welch among its super-select members.

In India, the first golf club, the Royal Calcutta Golf Club, was established in Kolkata in 1829. Thanks to its colonial masters, India was the first country,  outside of Great Britain to take up the game so early.

And though the game has old roots in the country it is only in the past decade that its popularity has suddenly gained momentum. "Awareness of the sport has increased over the past decade and a half," says Digraj Singh, golf coach and writer. "Corporate houses now see its value as a relationship-building tool. It is a sport to play and to flaunt."

"Among the most premium golf courses in India are the Delhi Golf Club, Jaypee Greens at Greater Noida, the DLF Club at Gurgaon, which has a by-invitation membership tag to it, Royal Springs at Srinagar, and the Eagleton in Bangalore," says Harrinder Sikka, director of corporate communications at Nicholas Piramal and an avid golfer. "I would rate DLF and Jaypee Greens amongst the most expensive courses in India, while Royal Spring has the most picturesque location."

As if the elite quotient was not enough, there are now a host of golf accessories — gloves, balls, clubs, bags, shoes and GPS navigators — available for the modern golfer to make the playing experience more enjoyable. Currently, the world's most expensive golf clubs are made by Honma of Japan — a complete, customised 14-piece platinum-and-gold set costs $32,000 (Rs 15.7 lakh). Louis Vuitton's $8,400 (Rs 4.1 lakh) golf bag too is among the most expensive.

But does the experience of playing golf in India match that of playing abroad? "The new courses that have come up in India match up to what the world has to offer in terms of design, conditions, beauty, facilities and drainage," says Digraj Singh. "It's like we have the same Mercedes cars the world drives. But we may not have that Rolls Royce, which the Augusta Golf Club or Pebble Beach in the US may be compared to."

Nevertheless, the future of golf in India looks bright. "Golf has emerged as a competitive sport here as well as a platform for networking among the rich and the famous," adds Sikka.