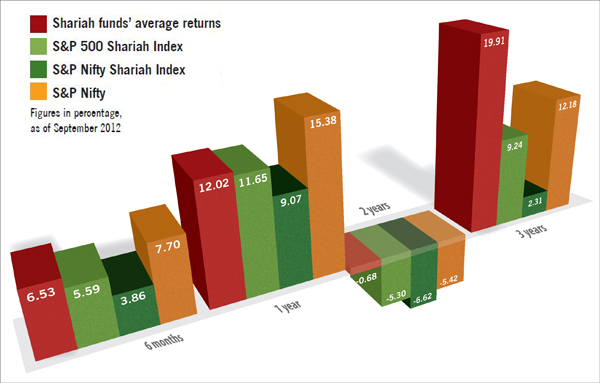 08 November, 2014
Print this article Font size -16+
It is a small but significant statistic, perhaps an indicator of an emerging trend. Over the past five years, Shariah-compliant funds — mutual funds that invest in accordance with the principles of Islam — have returned 9 per cent on a compound annual growth (CAGR) basis, compared to NSE’s S&P Nifty 50, which has fallen 1 per cent on the same CAGR basis. Investors aren’t complaining.

Mushtaq Multani, a cotton trader from Navsari, Gujarat, does not have a bank account, and until a few years back did not save any money. Not because he did not earn enough but because he didn’t know where to invest without going against his religious principles. “Until six years back, whatever I earned I put back into my business or kept as cash,” says Multani, who has since been investing in the stock market. His Rs 15-lakh investments are either in stocks or in mutual funds that are Shariah-compliant.

Granted that the total corpus of Shariah-compliant funds is small — less than Rs 150 crore in an equity mutual fund universe of Rs 1.87 lakh crore. The small base persuades analysts and market folk that the performance is not spectacular. But in a volatile market that retail investors have stayed away from, their steady long-term returns look attractive.

And there is new money coming into the Indian markets from Muslim investors from West and East Asia. “There has been considerable interest from our Middle East clients and we are running a Shariah-compliant portfolio for them,” says Prateek Agrawal, chief investment officer at ASK Investment Managers, which handles assets worth Rs 1,500 crore. “One of the difficulties in marketing the product is that people feel it has a religious connotation.”

Niche Investing
Shariah-compliant investing has three basic principles: One, it should not be interest-bearing (like bonds, loans, bank deposits, etc). Two, it should not have ethical concerns, implying that companies in the liquor, tobacco, banking and insurance businesses are a no-no. Even ancillary companies, such as hotels and restaurants where liquor is sold in substantial quantities, and receive more than 5 per cent of their revenues from the ethically-conflicted companies, are avoided. Three, the validity of contracts should be clear and transparent.

These rules, however, permit investment in term deposits of Islamic banks, Islamic bonds and leasing according to Islamic principles. Dividends from companies that are otherwise Shariah-compliant but whose ‘other income’ is substantially (more than 5 per cent) from interest are given to charity.

“It is essentially a negative list,” says Agrawal. “In some ways it is like how many of our Jain clients take exposure (only) to certain sectors.”

Despite the restrictions, these funds have given good returns. “Shariah funds have done exceedingly well,” says Reshma Banda, fund manager at Bajaj Allianz Life Insurance. “Also, their returns have been consistent.” In bad times, they have protected capital, which explains the performance. In the past two years, the nine Shariah-compliant funds have on an average fallen less than 1 per cent, while the Nifty has fallen 5.5 per cent.

“It is the selection of stocks that helps them do better,” says R. Rajagopal, senior vice-president of investments and advisory head at Kotak Mahindra AMC. “Their risk is lower; they don’t invest in high beta sectors like banking and financial services. And their mandates tend to allow higher exposures (than a large-cap diversified fund) to defensive sectors like IT and pharmaceuticals. In a down-trending market, these funds exhibit greater resilience and do not fall in line with the broader market.”

These factors are what the fund sponsors use to sell these funds. “We sell the fund on the logic that every time there is a downturn in the economy, Shariah-compliant stocks will give better returns,” says Waqar Naqvi, CEO at Taurus Mutual Fund, which has a Shariah-format fund. “The companies we invest in do not have interest costs; they are largely debt-free, and cash-rich companies always do well in a downturn.”

The logic works. In 2009, when the market was bad, Naqvi launched a fund that garnered Rs 2 crore. In three years, its assets under management (AUM) have risen to over Rs 25 crore. In the past three years, the fund has returned 30 per cent, compared to 12 per cent by Nifty.
break-page-break
Speaking of the four Shariah-format funds under him, Saravana Kumar, CIO at Tata AIG Life Insurance (Rs 16,000 crore equity assets), says, “They account for 5 per cent of our AUM. They were launched because there is a good demand from a section of investors. Themes like ethical investing are catching on, and help sell the product; for a fund manager, it is all about picking the right stocks.”

Then why aren’t these funds popular in India? Of every Rs 100 invested in Bajaj Allianz Life Insurance, just Rs 10 comes to Shariah-compliant funds. “The awareness is low,” says Banda, who manages the two ethical funds that account for 2 per cent of the total Rs 25,000-crore AUM. “Besides, the equity market itself is not doing well.” But she doesn’t believe that religious connotations are keeping investors away. Though the initial idea was to target Islamic investors, Banda says they are marketing the funds as diversification products. It may not be large in absolute terms, but 60 per cent of her Shariah-compliant funds have non-Muslim investors.

Convincing Argument
A Reserve Bank of India (RBI) committee in 2006 said that Islamic banking did not fit into India’s banking regulatory framework. But fund managers feel such funds will attract greater interest in the coming days. Andrew Holland, CEO at Ambit Investments Advisory, whose Shariah-compliant Ambit Qinvest India Fund has been active for the past two years, says, “Though they are more concentrated, high-quality stock portfolios that invest in strong revenue-generating companies, the interest in Shariah funds is growing because of the money-making opportunity they provide.” He adds, “By being Shariah-compliant, one can invest in consumer-, infrastructure- and services-related stocks, and that is the current theme of India’s growth story.” Holland feels that the inflow will be mostly from West Asia.

So could retail investors consider these funds for returns as well as to cap their downside risk? “Not really,” says Rajagopal. “Comparing them with other diversified funds may not be the right approach. India is still considered a growth market and diversified funds are a better option.” But, he says, investors could use Shariah funds in their overall portfolio to reduce volatility.

This could make Shariah investing catch on. “But product improvement is only possible when money flows into the mutual fund industry. So far that is not happening,” says the head on an asset management company.

Globally, interest is growing. Bursa Malaysia, Kuala Lumpur’s stock exchange, has a Shariah index. Indonesia has Shariah-compliant funds and other Islamic financial instruments. Germany, Japan and Australia are taking steps to attract and list Shariah-compliant investment vehicles. The Islamic Financial Services Board estimates assets in Islamic finance to be worth $2.8 trillion by 2015. Currently, various estimates put that figure at $1.6 trillion, and growing at close to 10 per cent CAGR.

So if there are enough stocks to choose from and the risk is limited, the only barrier for investors is perhaps cultural.