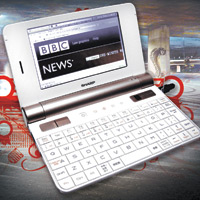 When Taiwan-based computer giant Asus launched the world's first netbook at the end of 2007, the device was not meant to be a cheaper laptop. After all, what could one accomplish with a 900-mhz processor, a screen of only 7 inches, and a 4-GB solid-state drive (SSD)? Asus thought people would buy it to connect to the internet on the go. But many consumers thought otherwise. They bought the netbook, and started using it like a laptop, forcing PC companies to make it look and feel like one. However, as the line between the netbook and the laptop begins to blur rapidly, another device is getting ready to take the place of the netbook. It goes, unfortunately, by the name smartbook.

A smartbook is a device even smaller than a netbook. And it does not pretend to be a personal computer (PC). It does not use an Intel processor, but one derived from cores of the UK-based technology company ARM. Only one smartbook exists now; that too only in Japan. It is called the Sharp Netwalker PC-Z1. It has a five-inch screen, a processor from Freescale Semiconductor and a 4-GB hard drive. It does not run Windows, and uses a Linux operating system, Ubuntu. It is more expensive than a netbook. So, why should anyone buy this device?

The way to approach a smartbook is not to consider it a PC. Most people, who buy expensive gadgets, have used a laptop, and would try to convert anything that slightly resembles a laptop into a PC. However, in the current, and probably future, gadget world, the trend is to split devices into different ones with specific functions. Use one for internet, one for productivity applications, and probably another one for entertainment.

Looked at this way, the smartbook is the internet-access device; specifically internet on the go. A device made largely to access the internet has to be made differently from a PC. If you use a PC for the so-called productivity applications, it needs to be built in a certain way. It has to have a large screen to read spreadsheets; needs a powerful processor, and enough memory for multitasking. If you accommodate all these features, the laptop becomes large, heavy and expensive. You could use it to surf the Web, but it is not your ideal travel mate. However, no one has made a device purely to surf the internet. Except probably now.

Also, a smartbook is small enough to fit into a coat-pocket, and can work on batteries all day. The Sharp Netwalker is supposedly built solidly, but at about $600, it is not your typical future smartboook. Within six months, the smartbook would cost under $300, and probably around $200 or even less after a while. It would feature a large number of applications soon, but those would not be typical PC applications. The global positioning system (GPS), for example, is an application tailor-made for the smartbook. But the device is not meant to run Office applications, even though it comes loaded with the free software office application Open Office.

Smartbooks would flood the market within a few months in many countries. They would not be made by the PC companies, but mostly by a few other established companies and startups. Wireless telecom giant Qualcomm, for example, is one of the prime movers behind the device, and has even coined the word, smartbook. To be of full value, and to avoid disappointment, users may be better off not thinking about it as a PC. The internet need not be associated with the PC after all.