Straight Answer To The Curve 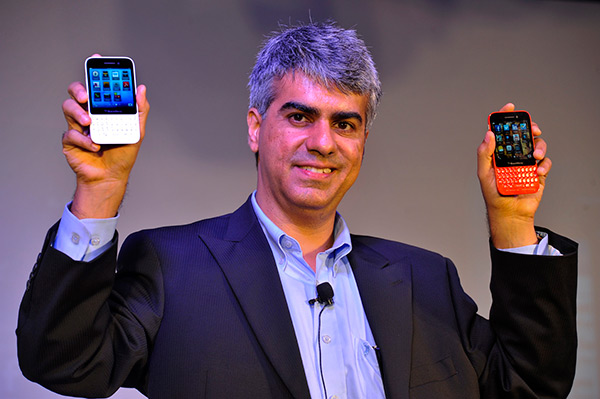 08 November, 2014
Print this article Font size -16+
Third in the BlackBerry 10 lineage after the Z10 and the Q10, is the Q5, a full Qwerty keyboard plus touch smartphone, meant for the emerging markets of the world.

On Tuesday, 16 July, launching the Q5 in India, BlackBerry India MD Sunil Lakwani said Q5 is aimed at the young super achievers, the young who want to explore. And keeping in mind the young clientele, this mobile from BB10 stable will cost Rs 24,990 with EMI options for buyers. There are no data bundle offers yet and standard ones will apply.

Frankly, if I were to imagine an upgrade to the older BB7 keyboard devices such as the Curve, that would please the BlackBerry faithful, I would think this would be it. Despite two more premium phones that came before it, the Q5 has more going for it.

Disclosure: I have never been a full time BlackBerry user and never craved a keyboard, having willingly moved to touch devices as soon as they made an appearance on the planet. But even I have to admit this is a wonderful set of keys. They take up about 40 per cent of the front and have obviously been crafted with loving care. The keys are small but distinct and separate, rounded in the direction your fingers are expected to move, and the right balance of press -– not too hard, not so soft as to interfere with tactile feedback. Unlike some BB7 device keyboards, the Q5’s is not curved upward but just straight and neat and easy to use, specially as the phone is so rather nice to hold in the hand. So, long-time BlackBerry users will easily love this keyboard, except that they may miss some of the keys that have now been turned into touch functions, such as for receiving a call. On the other hand there are many keyboard shortcuts, especially when using the browser, that will be welcome. I showed the Q5 to several BlackBerry users and without exception, they fawned over it, clearly impressed. All the same, they won’t and can’t entirely escape touch, which makes up more than half of this phone. More on that in a bit.

The back of the phone -– and that’s surprisingly important to users perhaps because they need to touch it about as often as the front and because it’s what faces others as one uses the device – is made of a solid but elegant plastic which is smooth and soft to the touch. It’s not removable and hides the 2,100 mAh battery inside while the SIM and the microSD slots are on the left edge of the phone. The volume control, BB style, is on the right. The power on button is right on top and not a problem to get to because the device isn’t large enough to require that much travel. If you choose to, you can mostly ignore the power button and swipe up from the screen to turn the phone on.

And what of the other 60 per cent on the front? Well, that’s all touch and the same BB10 as the Q10 and Z10. Just as fluid, just as quick with its swipe gestures and also sporting the BlackBerry Hub, social integration, and other BB10 features. In fact, there’s no compromise on the software front on the basis of its being the cheapest of the three so far. Physically, it isn’t even smaller than the Q10 and is, in fact, a tad taller. They Q10’s keyboard has frets and that device is a little heavier and has better hardware specs, but I found the keyboard, the all-important feature of the Q phones, actually more comfortable to use than the Q10’s. The 3.1-inch display is an IPS LCD, 720x720 pixels and not as advanced as the Q10’s but still it does have a density of ~328 ppi and is more than adequate for the phone. Together with the keyboard, it’s 4.72x2.60x0.43 inches.

A few other essential specs include dual-core 1.2GHz Qualcomm Snapdragon internals. RAM is 2GB, which is a lot for a device of this size. Internal storage is 8GB expandable by 32GB -– good to store documents on. The camera is perfectly average. The 5MP primary should not be considered an asset but a make-do camera, really. The front camera is 2MP and remember that you could be using it a lot since video chat is so easy to initiate on BB10.

The Q5 comes with many essential apps on board. There’s Docs to Go, all the social network apps, maps, Box for file storage, PDF reader, shortcuts to Dropbox and YouTube. In the past, BlackBerry users haven’t been as focused on apps and have used their devices as a super connected one to communicate with friends, family and colleagues. But it’s a different world today and while BlackBerry was busy creating BB10, Apples and Google’s app stores only went from strength to strength. With BlackBerry, the unfortunate chicken-and-egg situation is that developers are waiting for enough users and users are waiting apps. Well, that and a lot more. If you’re considering the Q5, know that it isn’t a great option for anyone moving from Apple or the Android ecosystems. It suits the BlackBerry faithful much more.

The Q5 comes in black, a very smart white, a nice red and a pink. In India, it will be available in red, white and the black But it remains to be seen which colours are available in India.