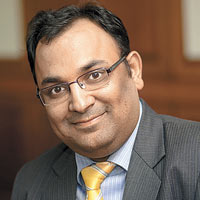 Stock To Buy: VST Indutries
Current Market Price: Rs 1,678 target (12 months): Rs 2,064
VST Industries is the third-largest cigarette company in India with a presence in the economy segment with brands such as Charms, Charminar and Moments. The company’s revenue grew at a compound annual growth rate (CAGR) of 14 per cent in the past five years. We believe VST is likely to outperform, benefitting from its low-priced cigarettes portfolio. With earnings growing at CAGR of 24 per cent over FY13-FY15 and an expected return on capital employed (RoCE) of 61.7 per cent in FY15, the stock offers a good investment opportunity, trading at 13.5 x FY15 EPS, along with a 6 per cent dividend yield.

Stock To Sell: Colgate Palmolive India
Current Market Price: Rs 1,322 Least price expected (12 months): Rs 1,251
The oral care market in India is witnessing heightened competition, with players getting aggressive. We believe the competition in the category will intensify further as players fight for market share. While we expect Colgate Palmolive India’s revenue to grow at a CAGR of 12.9 per cent over FY13-16, we believe on account of higher competition, profit after tax (PAT) growth is expected to remain subdued at 8.2 per cent.

Stock To Buy: ONGC
Current Market Price: Rs 284 target (12 months): Rs 362
ONGC is the biggest beneficiary of the move to gradually de-regulate fuel and gas prices. The stock does not factor in gains from the progress already made on fuel and gas price de-regulation. Though the risk of a higher subsidy burden will continue in FY14 due to the government’s stressed finances, we disagree with the view that the risk exists in perpetuity as: (a) it will then be difficult for ONGC to expand overseas and secure India’s energy needs and; (b) the likely fixation of gas prices for the power/fertiliser sector at $5-6 per mmbtu (million metric British thermal units) over the next 2-3 months will provide for higher realisation.

Stock To Sell:  Cairn India
Current Market Price: Rs 323  Least price expected (12 months): Rs 311
Cairn India’s single asset dependence will lead to its EPS declining. We expect EPS to decline at a CAGR of 20 per cent over FY13-15 due to: (a) a rise in the government’s share of ‘profit petroleum’ to 50 per cent in FY16 from 20 per cent currently and; (b) our assumption of Brent crude stabilising at $90/barrel in FY15. Further, Vedanta’s lack of experience in the oil and gas business and a series of senior management exits in Cairn India could lead to a ‘conglomerate discount’ being attached to the stock, pending the successful transition of Cairn India to Vedanta Group.

Stock To Sell: Oracle Financial Software Services (OFSS)
Current Market Price: Rs 3,258 Least price expected (12 months): Rs 2,064
OFSS is a 75 per cent subsidiary of Oracle Corporation. While growth was strong till FY10 due to the growing demand for banking software products in A-Pac and Africa, these markets are now well penetrated, which should restrict revenue growth. We don’t expect much growth from China; the US market is dominated by four local players which together have 96 per cent market share. There are no significant differences between OFSS and an IT services company on return ratios, cash flows and growth. OFSS appears to be comparable or inferior in revenue, earnings before interest, taxes, depreciation, and amortisation (Ebitda) growth and RoE.

Stock To Sell:  Hexaware Technologies
Current Market Price: Rs 140 Least price expected: Rs 105
After its acquisition by Barings Asia, Hexaware in our view is likely to be delisted. We see Hexaware going the Patni Computers way. End of revenue guidance in a good macro environment and discontinuation of the quarterly dividend are portents to a delisting. This is likely to exert downward pressure on the stock and could help Barings Asia acquire the remaining stake at a lower price than offered in the open offer. With the growth trajectory slowing and Hexaware trying to acquire companies to fill portfolio gaps, we see a higher risk profile in the near term. As such, the historical multiple (10-11 x) that it enjoyed hitherto may be hard to justify. Our valuation rises 24 per cent to Rs 105, driven purely by the depreciation of the rupee against the dollar, and we reiterate our Sell stance.

Stock To Buy: Coal India
Current Market Price: Rs 289 target (12 months): Rs 360
Coal India is expected to witness 6 per cent growth for the next five years, led by inventory liquidation, contract mining and investments in augmenting infrastructure capacity. However, we see an upside risk to pricing as 90 per cent of the coal is sold at contract prices which are at a 60 per cent discount to international prices on a quality-adjusted basis. Key catalysts include a special dividend in 4Q14, achieving volume guidance, strong e-auction prices and a price hike in FY15E. Coal India is trading at attractive valuations of 8 x PE (OBR adj.) and 3 x EV/EBITDA (OBR adj.) in FY15E, and a 30 per cent discount to regional peers.

Stock To Buy:  Sesa Sterlite
Current Market Price: Rs 196 target (12 months): Rs 225
Sesa Sterlite enjoys diversified earnings with operations in oil and gas, zinc, lead, aluminium, copper and iron ore. It is stuck with a gross debt of $13.5 billion although it has $7 billion in cash reserves in subsidiaries Hindustan Zinc (HZL) and Cairn India. Key catalysts in the near term are the restarting of iron ore mining in Goa and residual stake purchase in HZL. Even at depressed earnings, it is trading at an attractive valuation of 5 x PE and 3 x EV/Ebitda in FY15E.

Stock To Buy: ING Vysya Bank
Current Market: Rs 571 target price (12 months): Rs 711
ING Vysya Bank is well placed in terms of asset quality with a highly diversified corporate and SME portfolio along with one of the lowest exposures to stressed sectors such as infrastructure, textiles and steel. Its high provision coverage of 98.4 per cent gives the bank a cushion for controlling its credit cost in the future.  On comparing efficiency metrics with other new-generation peers, we believe there is scope for improvement. ING Vysya Bank is currently trading close to 1.4 x FY15E P/B ratio. It is ahead of most other older private banks in the race to transform itself into a new generation private bank and hence a potential re-rating candidate.

Stock To Hold:  ICICI Bank
Current Market: Rs 1,025 target price (12 months): Rs 1,069
Based on our analysis, we believe ICICI Bank has underinvested in its branch network in the past three years. Hence, ICICI Bank is currently struggling with improving branch-level efficiencies, both in assets and liabilities. We expect that the improvement in retail throughput is likely to take longer than what the market is currently anticipating. This, coupled with asset quality challenges and lower growth in advances in a tough economic environment will result in lower RoE improvements. Hence, in our view, there is no scope for further re-rating the stock.

Stock To Buy: Cipla
Current Market Price: Rs 399 target (12 months): Rs 504
Cipla is one of the largest players in the domestic formulations market, with a market share of around 5 per cent. It has a presence in markets like Africa, the US and Latin America. In the US, it has a strong product pipeline of ANDAs or abbreviated new drug applications (47 launched, out of the 76 approved). With the acquisition of Medpro, the company now has a front end in the fast-growing African market. We expect the company’s net sales to post a 15.5 per cent CAGR to Rs 10,796 crore and EPS to record a 12.1 per cent CAGR to Rs 23.9 over FY2013–15E. We recommend a Buy on the stock.

Neutral View:  Gsk Pharmaceuticals
current market price: Rs 2,969 target (12 months):  Neutral
GlaxoSmithKline Pharma has a strong balance sheet, with a cash component of Rs 2,200 crore which can be used for future acquisitions or higher dividend payouts. We expect its net sales to post a 2.5 per cent CAGR to Rs 2,752 crore and EPS to register a de-growth of 8.9 per cent CAGR to Rs 64.4 over CY2012–14E. Recently, the London-listed GlaxoSmithKline (GSK) announced it is going to increase its stake in its Indian pharmaceutical subsidiary, GSK Pharma, through a voluntary open offer. GSK, which holds a 50.7 per cent stake, wants to raise it to 75 per cent at a price of Rs 3,100 a share. The open offer is at an attractive price and a strong indicator from the management of the Indian market’s growth prospects. On the valuation front, on a normalised basis (for the impact of the Drug Price Control Order 2013 on its operations), the stock at the open offer should trade at  around 34 x CY2014 earnings. Long-term shareholders are advised to stay put as they can easily make 20 per cent on the stock. However, shareholders with a near-term view should render their shares as the valuation is at its highest.

Stock To Buy: Larsen & Toubro
Current Market Price: Rs 956 target (12 months): rs 1,400
L&T has significantly increased its domestic market share as well as that in West Asia in FY13. A significant part of the gain is due to its entry into new segments and geographies which provides it a strong base to capitalise on in the next leg of the investment cycle. Manufacturing (boiler-turbine-generator, shipbuilding, forging) provides opportunities for expansion. Several of its manufacturing businesses are difficult to replicate and L&T is positioned as a dominant player. We believe L&T’s core businesses have a robust operating leverage. Attempts to correct the capital structure, through monetisation of the development portfolio, will act as a strong RoE trigger.

Stock To Sell:  Siemens
Current Market Price: 597 Least price expected (12 months): Rs 500
Correcting its manufacturing footprint and increasing localisation have been a structural overhang for Siemens that is yet to be decisively addressed. While the attempt has been to increase the contribution of product exports and set up new factories in India (currently 22, versus seven in 2005), the company’s net forex exposure increased to 27 per cent of revenues in FY13 (versus 25 per cent and 19 per cent in FY12 and FY11, respectively). Raw material imports stand at 53 per cent of the total raw material costs, and 75 per cent of imports are from the Siemens AG network. Thus, currency volatility and demand contraction have impacted margins, particularly in the product portfolio. We believe that current valuations leave little margin for safety.

Stock To Buy: Hero MotoCorp
Current Market Price: Rs 2,030 target price (12 months): Rs 2,380
We expect Hero MotoCorp to gain market share in the scooters segment and maintain it in the motorcycles segment. We expect a 10 per cent CAGR in revenues, with margins likely to expand by 180 basis points (given the cost-cutting initiatives). At the same time, we expect savings of Rs 450 crore on account of royalty payments to Honda ending by March 2014. Hence, earnings are expected to grow at a CAGR of 20 per cent for the FY13-FY15E period. At the current market price, the stock trades at 18.9 x FY14E EPS and 13.7 x FY15E EPS. Our checks suggest strong traction for its products.

Stock To Sell:  Ashok Leyland
Current Market Price: Rs 17  Least price expected (12 months): Rs 17
While we have built in a decline of 15 per cent in M&HCV (medium and heavy commercial vehicles) volumes for FY14E, we anticipate a recovery of 13-15 per cent in volumes, led by low base and a slight recovery in the economy in FY15E. Despite improvement in volumes, the stock is currently trading at an expensive valuation of 12.7 x FY15E EV/Ebitda, which also factors in a higher recovery in FY15E. Given the strained balance sheet with a debt of around Rs 4,000 crore, we remain cautious on the stock. With a near-term recovery unlikely, we continue to maintain Reduce on the stock.