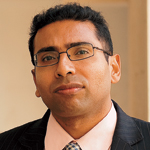 However, the stockmarket tends to overshoot in both directions, and we believe that large amounts of foreign and domestic capital are headed for the Indian stockmarket. We are headed for a liquidity-driven bubble in the Indian market, where despite fundamentals not being supportive, the market is likely to have a good run. Our confidence with regards to the outlook for fresh capital inflows into the Indian market arises from the following.

Firstly, the BRIC (Brazil, Russia, India and China) story: The growth differentials of BRIC countries stand in stark contrast with contracting economies in the western world.

Secondly, 6 per cent plus base case growth: As demonstrated in a crisis year like FY09, the sources of India's resilience stems from its high savings and investment rates, and the continued growth of its service sector, which has a low capital requirement for growth.

Lastly, deepening financial markets: Long-term factors are at play here, other than our savings rate, which is at 35 per cent. In fact, only 5 per cent of India's savings currently flow into the equity market. This figure has been rising for the past four years and each 100 bps (basis points) rise in this figure pulls in an additional $3.5 billion into the equity market.

The risks to this relatively upbeat base case scenario arise from three distinct sources. Firstly, for all the talk of green shoots, the western economies are still contracting with little visibility on when they will grow again.

Recent economic data show that US unemployment has risen from 4.8 per cent to 9.5 per cent over the past 16 months and even this, say US experts, understates the true extent of unemployment.

Bank of England's credit conditions survey shows while lenders are saying that they intend to make more credit available, there have been few signs that they are actually doing so. In the UK, lending spreads are increasing, deposit requirements on new mortgages remain high and lending is actually slowing.

Non-financial corporate profits in the UK dropped 6 per cent in Q1 CY09 and Capital Economics, a leading British forecaster, says that it could drop by as much as 20 per cent in Q2 CY09.

Unfortunately, western stockmarkets seem to have already factored in an economic recovery — since 9 March, the Standard & Poor's 500 is up 33 per cent and the FTSE 100 is up 19 per cent. So, there is a distinct possibility of correction in the western stockmarkets. That will then push up the VIX (volatility index) for global markets. This matters, because when the VIX rises, foreign money runs out of India and our stockmarket heads south.

The second source of risk is cash availability for corporate India. While corporate India's FY09 earnings growth has been relatively impressive (15-20 per cent for most large companies), the real damage has taken place on cash flow statements and balance sheets as working capital cycles have expanded in an environment in which almost everybody is scrambling for cash. Banks are reluctant to fund these working capital requirements. The ECB market is shut for all but the bluest of blue chips and, hence, corporate India is on a QIP issuance binge to fund its cash shortfall.

The third source of risk is corporate shenanigans, along the lines of a Satyam, coming to light. While the establishment would have us believe that Satyam was an exception, the reality is very different. While the audit community in India is bound to have cleaned up its act somewhat in the wake of Satyam, almost nothing has been done on the regulatory front to crack down on companies and gets the true financial picture.

The author is Head of Indian Equities at Noble Group