New Delhi [India], June 15 (ANI): Indian opening batsman Shikhar Dhawan on Monday mourned the untimely death of versatile star Sushant Singh Rajput and extended condolences to the family of the late actor.
The left-handed batsman put out a picture of the late actor on Instagram and expressed grief over the demise, saying that he was 'still unable to believe this'.
"Still unable to believe this. This is so, so sad. Thoughts and prayers to the family, friends and all the fans of Sushant. Rest in peace, God bless your soul," Shikhar captioned the post. 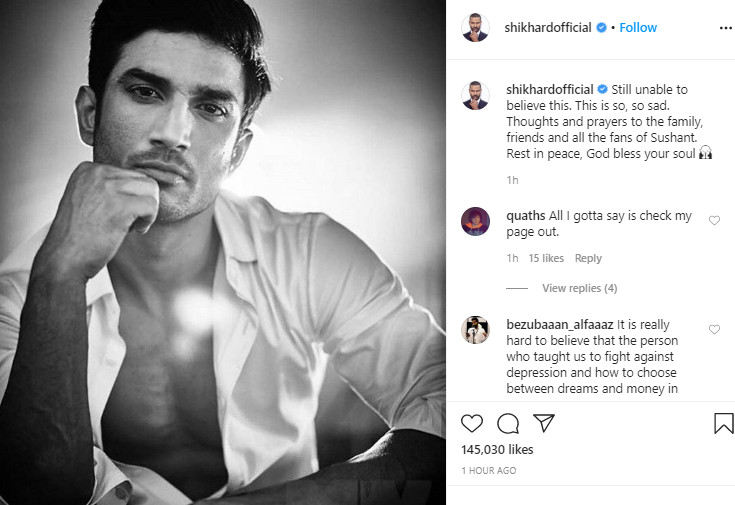 Rajput, who was 34-years-old, committed suicide by hanging himself on Sunday, Additional Commissioner of Police Manoj Sharma had confirmed.
He made his debut with Abhishek Kapoor's 'Kai Po Che', and went on to act in several blockbuster hits such as 'MS Dhoni: The Untold Story', 'PK' and 'Kedarnath'. Rajput was last seen in 'Chhichhore' alongside Shraddha Kapoor.
Several sports personalities including legendary batsman Sachin Tendulkar, boxer Vijender Singh, spinner Anil Kumble, Sania Mirza, and many others took it online to share their grief and sorrow with the untimely demise of the young actor. (ANI)