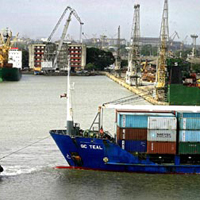 08 November, 2014
Print this article Font size -16+
The government is expected to soon announce some initiatives to boost investor sentiment and push exports which may miss the $360 billion target because of global economic uncertainties, a top official said on 28 August.

"I am sure that the government is taking proactive steps. In the next 3-4 weeks, I expect significant policy announcements which should encourage our industry, our exports," commerce secretary S R Rao said at the CII Export Summit in Delhi.

Rao said global trade is shrinking and countries such as China, the US, Japan and Europe are not showing signs of improvement. These are the major export destinations for Indian exporters.

When asked whether India will be able to achieve the $360 billion exports target for this fiscal, he said: "it is difficult".

However, the secretary added proper cooperation between Indian entrepreneurship and the government could help in achieving the exports target.

"...I am sure that the government will do everything to improve the investment and manufacturing climate in the country," Rao said.

India's exports during the April-July period have shrunk by 5.06 per cent to $ 80.4 billion. Industrial output in the April-June quarter too contracted by 0.1 per cent this fiscal.

He also said that high cost of credit "is a great worry at the current moment".

He also expressed concern over widening trade deficit of the country, which has touched $55.6 billion in April-July period.

He said trade deficit is because of "a very high import bill of hydrocarbons and insatiable appetite for gold".

Talking about free trade agreements (FTAs), the secretary said that India has already concluded 10 such pacts and are negotiating 17 more.

"FTA's are going to influence the business of imports and exports. We need to work on production levels to realise the potential of FTAs," he said.

India has operationalised such pacts with Malaysia, Asean, South Korea and Japan. Currently, the country is negotiating an ambitious comprehensive free trade pact with EU.