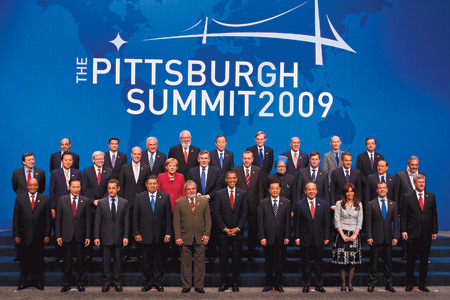 After having slain the saffron dragon in the elections, and ended India's pariah status amongst nuclear powers, the Prime Minister could afford to rest on his oars. But he has promises to keep, and miles to go before he sleeps. I found him sprightly and full of energy when he met the press some hours after the end of the G20 summit.

In his brief speech at the summit, Manmohan Singh made two major points. One was that the industrial countries had injected money into their economies on a massive scale to stabilise their privately owned financial systems. To help developing countries deal with the global downturn, the G20 countries had resolved to increase the funds at the disposal of the International Monetary Fund. But the Fund could give developing countries only temporary relief from their payments problems; the loans it might give them could at best sustain economic activity at depressed levels. Developing countries' exports had yet failed to recover. To resuscitate their growth, the fall in their exports should be offset by increasing investment in their infrastructure. They should be given investment aid; and the appropriate institutions to give it were the World Bank and regional development banks. Hence the best way to give relief to developing countries was to replenish the World Bank's capital. Second, he asked industrial countries to avoid taking protectionist measures, and to support the Doha Round of trade negotiations to which India had tried to give a new impetus in the ministerial meeting of major participants it hosted in New Delhi in August.

The origin of G20 is convoluted. After the US went off gold in 1971, exchange rates of important countries became determined by the market, and could be destabilised by speculation. To discuss the new, potentially unstable world economy, the finance ministers of US, UK, France and Germany met on 25 March 1973 in the library of the White House, the residence of the US President. Japan joined them soon after, making them G5. They continued to meet somewhere or other at least once a year, often in secret, till 1987. Independently, Valéry Giscard d'Estaing, the French President, invited the leaders of US, UK, Germany and Japan in 1975 to Rambouillet, his summer palace, for an informal chat. The group, later expanded to include Italy, Canada and Russia, has met every year, last time in L'Aquila on 8-9 July. The meetings of the political leaders and the finance ministers coalesced after 1987, and turned into jamborees involving meetings of other G8 ministers, working groups, task forces and expert groups as well. The group is hosted by a different member each time. Some members forget to invite Italy; then it turns into G7.

After the outbreak of the East Asian crisis, the US Secretary of the Treasury invited finance ministers and central bankers of G8 and of another 14 "systemically important" countries to Washington for a meeting in March 1998. This G22 became G33 for a while; finally, G8 finance ministers and central bankers froze the invitees in 1999 at 19 countries plus the European Union, making the total 20.

"Financial leaders", as the finance ministers and central bankers are called, are the core of G20, and the global economy remains their enduring subject of discussion. But the global downturn that started in 2007 raised the urgency of international cooperative action. Last November, the "financial leaders" met in São Paolo and drafted a plan of action; a week later, their political masters met in Washington to adopt it. Those leaders agreed to improve financial regulation, coordinate regulation across countries, and reform and strengthen the Fund and the Bank. They then met in April in London, and again in Pittsburgh last week to review progress on their Washington Action Plan.

Whilst the political leaders give their authority to the action plan, it is the finance ministers and governors of central banks who make and monitor the plan. In our case, the man in charge is Montek Singh Ahluwalia — the Prime Minister's sherpa in modern international jargon. He is tailor-made for this emergency assignment: he thinks fast, expresses himself clearly, and is at home in an international environment. He must hardly have unpacked his bags for the past six months. He would have kept an eye on the drafting of reports of the four working groups which formed the basis of the leaders' decisions in Pittsburgh, on enhancement of regulation and transparency, international cooperation and integration of financial markets, reform of the IMF, and reform of the World Bank and regional development banks. He may relax at home and do national planning for a while, but it will not be long before he is on another flight. For the political leaders decided to make G20 the premier forum for international economic cooperation. That means sustained work and arduous negotiations for financial leaders; ours is Montek.

What the PM said

Why G20?
Interdependence of nations is a fact of life. [It] means that no country, however powerful, can take on the entire burden of economic adjustment and decision-making required to manage the global system. It is the perception of that reality that I think has persuaded many people in Europe and the US that G8 is ill equipped to handle all the global issues. With the rise of Asia, with the growth of India, China and Brazil, economic decision-making has to take account of the views of these countries.

Why should we bother?
If the world economy collapses, there is obviously some effect on our country. Already our growth rate, especially of exports, has suffered; it has led to a decline in exports of our labour-intensive industries such as gems and jewellery, leather goods and textiles. It is therefore necessary for India that the global economic system continues to progress. We need an external environment that is conducive to the growth of our exports, to increasing capital flows, and to increased flows of technology.

What difference did Pittsburgh make?
There was an agreement at today's (25 September) meeting that the G20 economies will be monitored by the International Monetary Fund through an independent process of evaluation. It will be a sort of peer review. It will give all the G20 countries an opportunity to discuss the strengths and weaknesses of various economies, including their financial and banking systems.

What did you get for India?
I believe, the institutionalisation of G20. Plus, the agreement that countries that have adopted stimulus measures would not prematurely withdraw them. India needs an international environment in which its economy can grow. If the world economy is growing, if the world trade is growing, that will help improve our growth performance.

Would you also give additional stimulus to the Indian economy?
Well, we have to respond to our domestic situation in our specific circumstances; it is certainly true that we have limited fiscal space and therefore limited scope for accelerated fiscal stimulus. Monetary policy has some scope; that also would be exhausted if inflation becomes a problem. As of now it is under control, but I think our options are limited, constrained as we are by the substantial fiscal deficit. The monetary initiatives the Reserve Bank has taken have also reduced our scope at the margin.

So you agreed to an outside review of our  economy?
As far as our domestic policies are concerned, the Fund reviews them every year under Article 4 [of the 1944 agreement which created the IMF]. But [today we have brought] the policies of the major developed countries within the framework of review; that will give us an opportunity to judge their economic functioning.

Will G20 curb protectionism?
I think things could be worse... There is evidence of creeping protectionism, but it has not reached an alarming point. International pressure is necessary to restrain and restrict the growth of protectionism.

Will our policies change as a result of G20 decisions?
I would not announce any changes in policy while I am on foreign soil.

You did not go any further on tax havens.
The reform of the regulatory system is part of G20's continuing agenda; so treatment of entities in tax havens remains a matter of concern. Even today's discussions touched upon it.

How optimistic are you?
Well, G20 is an essay in persuasion. Whether it succeeds in persuasion... in its objectives, only time will tell.

Did you raise MTN with the President of South Africa?
I did mention it to President Zuma; I said I sincerely hoped that the deal would go through and that Indian companies will not be subjected to any discriminatory practices. This matter will be further discussed with the government of South Africa.