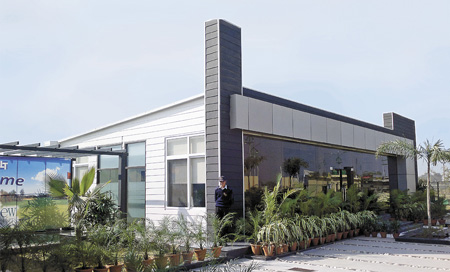 Use of smart steel technology and prefabricated building components are fast becoming favoured methods of construction. "As the cost of borrowing is steep and developers face a liquidity crunch, time means money and modular construction is faster, adding to the revenue stream of builders," says Sachin Sandhir, MD, Royal Institute of Chartered Surveyors (RICS) South Asia, a regulatory body of real estate professionals. Sandhir adds that pre-engineered buildings have a better performance record as factory or assembly line-produced homes are manufactured to stricter norms. "Fast, on-site assembly of manufactured components which are durable, environmentally friendly and reusable also helps develop sustainable building systems, which provide such structures with a lifespan of approximately 30 years," he says.

Amit Gupta, managing director of Orris Infrastructure, an NCR-based infrastructure firm with a sales turnover of Rs 500 crore in FY 2011, agrees. "Given the mood of the market, we cannot afford to delay our projects," he says and adds that increased speed of construction and maximum and optimal utilisation of material makes prefabricated technology much more cost-effective in the long run.

Hitting A Wall
Given all these benefits, why aren't homes being built using prefab technology? A lack of awareness is the primary hurdle to the adoption of prefabricated technology. Sandhir attributes the resistance to the construction industry itself as it is assumed that the technology will pose a threat to the employment of semi-skilled and unskilled manual labour. Another hurdle is the inflexibility of developers to adopt innovative construction materials, while high taxes and duties imposed on prefabricated components are also a deterrent.

break-page-break
"The Delhi Metro incident where prefab structures developed cracks leading to an accident has further dented the image of such materials in the mind of the buyer," says Gupta of Orris Infrastructure. Prefab structures require trained labour and the lack of resources close to building sites is a major reason for developers not taking to this mode of construction, he adds.

Home buyers' lack of experience of advances in construction technology makes it hard to convince them about the benefits of prefabricated homes. "Home buyers demand brick-and-mortar homes. They say ‘how will I fix a nail in a concrete wall if I wish to put up a painting or family photos?'," says Tiku. What they are unaware of is that in a prefabricated house, an entire wall can be shifted, he points out.

With home buyers far from convinced about the new technology, several developers are restricting the use of prefabricated construction techniques to plants and commercial buildings. Tiku says in Ansal's case, the fact that the building was meant for its own institute gave the company the liberty to demonstrate the technology. "It took us some time to convince the All India Council for Technical Education (AICTE) — the statutory body for technical education — that the building had actually been completed in three months," says Tiku, indicating a lack of awareness about building technology.

Ansal employed the services of Everest Industries, a company that offers comprehensive pre-engineered building solutions and had a sales turnover of Rs 783 crore in FY 2011. The building designed for the institute comprises steel framing walls, roof trusses, building paper for exterior walls, heavy duty wall boards, false ceiling grid system with cement boards and mineral fibre tiles, a metal roofing system, rockwool wall insulation, aluminum facing foil and glasswool insulation for roofs. On an average, 50 workers were engaged in two teams to get the structure up by working 10 hours a day. "The design of the building was kept simple as speed and time were of the essence," says Manish Sanghi, MD, Everest Industries.

Sanghi believes that with the growing acceptance of prefabricated components in commercial buildings, home buyers will soon get comfortable with the technology. Everest has built factories and commercial facilities for big-name firms such as Britannia (in Hajipur, Bihar), Bharti Walmart (in Amritsar, Punjab; Raipur, Chhattisgarh; and Meerut, UP), Whirlpool (in Pondicherry) and Honda Siel (in Bhiwadi, Rajasthan). It has also constructed sample houses for Noida-based developer Sunshine Helios and Lucknow-based Tulsiani Developers and is currently working on nearly 60 sites.

Despite the low levels of awareness and acceptance of prefabricated technology, Sandhir believes that "the dearth of 26.5 million affordable housing units in the country, which translates into a potential size of $250 billion at $10,000 a unit, and the inherent project execution challenges and shortages in human resource capabilities" will ensure that " traditional brick-and-mortar construction gives way to modern methods of construction such as prefabricated structures. It is, therefore, safe to assume that even if 20-30 per cent of development is undertaken through prefab techniques, the industry size will be to the tune of $100 billion". New technology would be critical to building homes quickly and more cost-effectively, especially as input costs for traditional construction continue to rise, he adds. "Since customers want quality and timely possession, such technology is inevitable in housing," predicts Magazine.

RICS in partnership with asset management firm Sam Circle Venture, Philadelphia-based architecture firm Kieran Timberlake and Mumbai-based consultancy company Project Well is already working on an affordable housing concept called India Concept House that uses prefabricated technology and allows houses to be manufactured and assembled in under two months. Under the plan, these homes — targeted at the affordable housing segment in Tier II and III cities — will help reduce construction time by up to 90 per cent with construction costs pegged at Rs 900-1,200 per sq ft.

Ansal is also pushing for the technology. It plans to add another 15,000 sq ft to its institute using smart steel. It is also using the technology in parts of its Sushant Lok City in Lucknow. "We are developing high-end condominiums with the sample flat built using pre-engineered components," says Tiku. Through such samples, the company aims to convince home buyers.

While it may be a while before home buyers are convinced, there is no doubt that dream houses of the future will be factory-made.