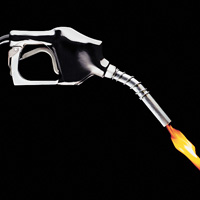 08 November, 2014
Print this article Font size -16+
Shares in state-run oil firms surged for a second day on 18 December' 2013, with ONGC gaining as much as 12.9 per cent to add around $6 billion in market value, after a government diesel price hike was seen reducing their subsidy burden.
The government, which fixes the retail price of diesel, on Thursday told retailers to raise the price of the subsidised fuel in small amounts every month, a move aimed at propping up public finances that should also improve revenues in the sector.
The government and state-run companies share the cost of selling subsidised diesel to consumers. Analysts said producers such as Oil and Natural Gas Corp Ltd would benefit more from the new measures than retailers because of the way the subsidy is structured.
The price hike was more limited than expected, given the oil ministry last month told reporters it was working on a proposal to raise diesel prices by 1 rupee a month for 10 months, but was seen as more likely to be accepted politically ahead of state elections this year.
"Investors may rightfully question the ability of the government to raise prices continuously given high inflation and social and political issues," Kotak Institutional Equities wrote in a note on Friday.
"We think the companies can raise prices of diesel a few times over the next few months; the first nine months of the current calendar year are relatively free of state elections," the brokerage added.
Analysts said producers such as Oil India Ltd would benefit most from the diesel price hike, given they have been selling crude oil and associate products at a discount, and could be allowed to charge higher prices.
ONGC was trading up 7.8 per cent at 12:34 p.m., after earlier hitting its highest since October 2010. Oil India rose 11 per cent after gaining 4.2 per cent on Thursday.
Downstream companies, such as refiners and oil marketers, would benefit far less given they are partly compensated through cash subsidies from the government as well as discounts from oil producers, making the exact benefits more uncertain.
"For us, the savings will mainly be on interest cost on under-recoveries. Part of our subsidy burden was compensated by the government, but we received this after several months, so had to incur interest costs in the meanwhile. This will be saved," said B. Mukherjee, director of finance at Hindustan Petroleum Corp Ltd.
"However, I don't think this will be substantial, at least for this fiscal (year)," he added.
Still, shares gained, with HPCL rising 8 per cent and Bharat Petroleum Corp putting on 9.5 per cent as of 12:36 p.m.
The biggest potential losers from the measures could be bulk buyers, according to analysts, as they would have to pay market rates for diesel under the new rules.
However, the dual pricing of retail - lower prices for consumers and higher prices for bulk buyers - had been largely expected. Cement makers ACC Ltd fell 1.5 per cent after slumping 5.1 per cent this month as of Thursday's close.