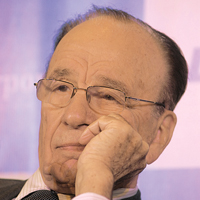 Rupert Murdoch and his son James Murdoch don't often come calling together. Little wonder when they do, it becomes a subject of media speculation. Last week, Rupert, the head of News Corp, and James, the chairman and CEO of News Corp Europe and Asia, were on an official visit to India. (NewsCorp and ABP Group, the publishers of Businessworld, have a joint venture called MCCS).

The Murdochs' whistle-stop schedule included meeting Prime Minister Manmohan Singh, opposition leader L.K. Advani, Information & Broadcasting Minister Ambika Soni and Commerce Minister Anand Sharma. The agenda? "It was not to ask favours from the government," says a senior Star spokesperson. "It was a courtesy call, and to understand what is happening in the region." He adds that the visit sends an internal signal that the Murdochs personally see India as important to News Corp's business. The revenues from India touched $450 million for the year ending 30 June, accounting for 75 per cent of Star Asia's performance.

The visit is also the first after the restructuring earlier this year, of closing down Hong Kong as the Asia headquarters and having the India operations report directly to London. The internal reviews the duo went through assumes significance as it comes at a time when the money-spinning Hindi entertainment channel Star Plus has been worsted in the past few weeks by Viacom18's Colors to No. 2 position.

"He (Rupert) voiced the need to renew ourselves," says a Star spokesperson. "It will be consolidation rather than expansion at Star for the next year."