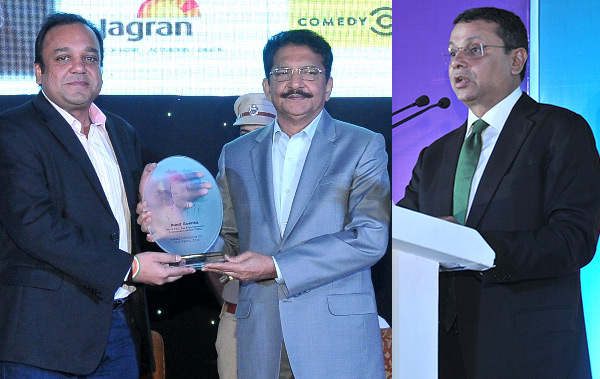 14 January, 2015
Print this article Font size -16+
Star India's CEO Uday Shankar has been named ‘Impact Person of the Decade 2014’ for his contribution to the media and advertising industry over the last 10 years. Maharashtra Governor C. Vidyasagar Rao presented Shankar with the honour last week.

In a separate presentation at the same function, the Governor presented the ‘Impact Person of the Year’ Award to Punit Goenka, MD and CEO of Zee Entertainment Enterprises Ltd (ZEEL) in the presence of Dr. Subhash Chandra, Chairman, Essel Group and Mr. Anurag Batra, Chairman, exchange4media Group. Goenka bagged the award for his efforts in bringing about change in television audience measurement in the country as chairman of the Broadcast Audience Research Council (BARC), driving profitability in the broadcast sector and steering ZEEL to a steady rise.

Lauding Shankar’s journey, the Governor said: “His agenda of driving a social change through programs like 'Satyamev Jayate' has had a huge impact. In a country where cricket is a religion, he has brought to the fore games like Hockey and Kabaddi and demonstrated how these games could also be popularised in a changing world." Bollywood superstar Aamir Khan, who hosts social issues-based show 'Satyamev Jayate' congratulated Shankar in a recorded message.