Star Power, And The Price Tag 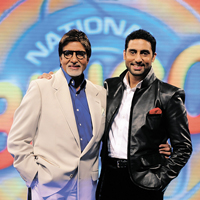 Is getting a big celebrity to host a reality show the perfect recipe for its success? Not quite. Consider the recently launched game show National Bingo Night on general entertainment channel (GEC) Colors. Hosted by Bollywood star Abhishek Bachchan, the show recorded television viewership ratings (TVR) of 5.1 on the debut night, the highest for any celebrity-hosted show in the past few years. Interestingly, the TVR fell to 2.0 in the very next episode.

Whether the initial success was the result of the Bachchans’ star power — Amitabh Bachchan was also present — or because of the multimedia promotion blitz backed by huge spends, is hard to figure out. Ravi Kiran, CEO, South Asia, Starcom MediaVest Group, says, “In some ways, the role a celebrity plays in marketing a show is not very different from what she may play in marketing any brand through endorsement — generating quick familiarity for a new or unknown product.”
Rajesh Kamat, chief operating officer of Viacom 18 and CEO of Colors, says, “Celebrities are a good investment if they fit the brand and show perfectly. They help in bringing the essential buzz and in making the channel a perception channel.” But big celebrities do not come cheap. According to industry sources, Amitabh Bachchan charged Rs 8 crore for Big Boss, Abhishek Bachchan charged Rs 5 crore for Bingo — both for a season, and Salman Khan was paid Rs 90 lakh a day for hosting Dus Ka Dum.
Click here to view enlarged image
In fact, paying big bucks to celebrities does make business sense. GECs find it simpler to pitch the sponsorship of a celebrity-hosted show to a brand that is already using that celebrity as an endorser. Agrees Kiran: “To some extent, it works for the brand, as it consolidates the association between the brand and the celebrity. Brand managers often decide to sponsor a show hosted by their celebrity endorser for fear of their endorser being hijacked by competition.” Idea’s association with Bingo is a case in point.
There have been as many success stories as failures. While shows such as Akshay Kumar’s Khatron Ke Khiladi, Amitabh Bachchan’s Big Boss, Rajeev Khandelwal’s Sach Ka Saamna, and Angad Bedi’s Emotional Atyaachar have done well, others such as Govinda’s Jeeto Chappar Phaad Ke, Madhuri Dixit’s Shubh Vivaah and Shah Rukh Khan’s Kya Aap Paanchvi Pass Se Tez Hain, fell below expectations.
The new trend is getting less-famous celebrities such as Rajeev Khandelwal, Angad Bedi, Rakhi Sawant Rakhi Ka Swayamvar and Rahul Mahajan Rahul Dulhaniya Le Jayega. Heather Gupta, channel head of UTV Bindass, says, “Lesser-known faces do work well. Their costs are less prohibitive and they are very comfortable with television formats.”
Danish Khan, vice-president, marketing, Sony Entertainment Television, adds, “Different shows need different kind of anchors. Some shows by nature need big superstars, some need big television faces, some need great master of their arts such as singers or choreographers... based on the requirement of the show.”
For the time being — profit or loss — big investments in celebrities seem to be in vogue.
(This story was published in Businessworld Issue Dated 22-02-2010)
Tags assigned to this article:
magazine colors viewership tvr viacom 18 starcom media amit bapna