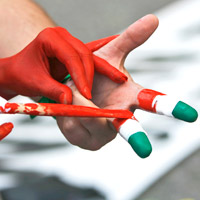 08 November, 2014
Print this article Font size -16+
For India, the good is almost always followed by the bad. On a day when the World Bank predicted that China and India are going to be world's biggest investors by 2030 and that the percentage of global investment to developing countries should triple in the next two decades, ratings agency Standard & Poor's also affirmed India's sovereign rating at "BBB-minus" with a "negative" outlook.

The rating agency, which warned of at least a one-in-three chance of a downgrade within the next 12 months, said the major risks for a lower rating are a high fiscal deficit and heavy government borrowing.

BBB (minus) rating is the last investment grade rating, one notch above junk status. S&P said on Friday, 17 May 2013 that the government's ability to prop up investment growth remained uncertain though it expects India to grow around 6 per cent in the current fiscal year ending March 2014, according to credit analyst Takahira Ogawa.

IWhile the Chief Economic Advisor to the Finance Ministry Raghuram Rajan described the rating action as "disappointing", Economic Affairs Secretary Arvind Mayaram said: "I think we are on right track and the reform process will continue and therefore I don't think there is anything to be worried about".

According to Rajan, "S&P has not seen it fit to improve its outlook for India, especially given that it acknowledges the important steps taken by the Indian Government in recent months.

"International institutional investors, who have invested over $17 billion into India so far this year, do seem to have a different view".
India's benchmark 10-year yield rose 4 basis points to 7.41 per cent from levels before the statement. The yield closed at 7.39 per cent on Thursday.

"If India's general government fiscal or current account deficits worsen contrary to our expectations, we may lower the ratings," S&P said in a release on Friday, after affirming India's BBB- rating with a negative outlook.

S&P's statement came as Finance Minister P. Chidambaram was in Paris to sell investors on India, part of a road show series that in recent months has taken him to New York, Singapore, Tokyo, London, Hong Kong, Frankfurt, Ottawa, and Toronto. He has also said he will stick to a budgeted fiscal deficit target of 4.8 per cent of GDP in the fiscal year ending March 2014 after being able to restrict the deficit to around 5 per cent in the previous fiscal year.

Since taking office in July, Chidambaram has pushed a series of reforms aimed at shoring up government finances and reviving investor confidence in an economy that grew at just 5 per cent in the fiscal year that ended in March, its worst in a decade.

However, the most recent parliamentary session ended early amid heated political acrimony over recent corruption scandals, stranding several pieces of legislation including a land reform bill.
“India's long-term growth prospects, underpinned by its favourable demographic profile, and its high foreign exchange reserves support the ratings. The country's large fiscal deficits and debt, as well as its lower middle-income economy, constrain the ratings,” the agency said in a statement.

The ratings agency, however, said there was scope to upgrade the sovereign ratings if the government unleashes public and private investments to spur economic growth.

"We may revise the outlook to stable if the government carries through with its plans to unleash public and private investments (for example, by enacting the land acquisition bill), to implement a nationwide government sales tax, or to further trim fuel and fertilizer subsidies," S&P said.

Read Also: China, India To Be World's Biggest Investors By 2030

“We may lower the rating if we conclude that slower government reforms than we currently expect would not lead economic growth to recover to levels experienced earlier this decade,” it said.

“Such a conclusion could come from anemic investment growth, reversals on diesel or other subsidy measures, or inability to increase electricity supply to meet increasing demand. Similarly, if India’s general government fiscal or current account deficits worsen contrary to our expectations, we may lower the ratings,” it added.

Although part of this slower growth is cyclical, rigidities in the labour and product markets and inadequate infrastructure constrain the country's medium-term growth prospects.

India's headline inflation fell below 5 per cent in April, putting it back in the Reserve Bank's comfort zone for the first time in more than three years and fuelling market hopes for more monetary easing to revive the economy's pedestrian growth rate.

April's reading of 4.89 per cent was the lowest since November 2009 and well below the 5.50 per cent estimated by analysts in a Reuters poll. The wholesale price index, India's main inflation measure, rose an annual 5.96 per cent in March. Falling for the second straight month, retail inflation also declined sharply to 9.39 per cent in April due to easing of prices of vegetables, edible oil and protein-based items.

The number sparked gains in bond markets, which had already rallied since last week on expectations easing inflation would lead the RBI to cut interest rates further.

India's growth slipped to a decade low of 5 per cent in the fiscal year that ended in March 2013 after posting nearly double digit growth in 2008. Recent corruption scandals have prevented the government from passing key reform bills in the parliament.

India's economic confidence dropped last month due to plethora of corruption allegations against the Union government ministers and the country is now the sixth most economically confident country in the world after Saudi Arabia, Sweden, China, Canada and Germany.

According to a survey by global research firm Ipsos, India's economic confidence dropped by 2 points to 63 per cent in the month of April, 2013 compared to the month of March, 2013.

The drop in economic confidence of the country was despite the fact the there has been a continuous decline in inflation rate and upbeat investor confidence, Ipsos said.

"Frequent allegations of corruption is revitalising negative public perception among Indians about the state of its economy despite indications that inflation is gradually subsiding and investor are increasing becoming confident about business opportunities in India," Ipsos India CEO Mick Gordon said.