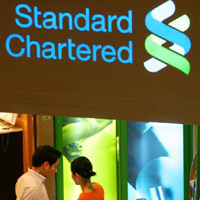 08 November, 2014
Print this article Font size -16+
Standard Chartered said its first quarter operating profit was likely to be slightly lower than a year ago as an increase in hiring, and wages, pushed up costs.

Overall income would be slightly higher compared to the same year-ago period, the bank said, thanks to client volume growth. Standard Chartered does not issue full quarterly numbers, and releases its earnings twice a year.

The bank has notched up 10 years of consecutive record profits thanks to strong Asian markets. Hong Kong was the standout market in the first quarter this year, growing at a double digit rate, while growth in Korea and Singapore weakened.

Standard Chartered holds its annual shareholder meeting in London later on Wednesday, when a disagreement over corporate governance could again flare up with Singapore investor Temasek, its biggest shareholder.

Temasek, which owns 18 per cent of Standard Chartered, last year abstained from voting to re-elect some directors in a signal it disagreed with how the bank constructed its board.

The AGM will also be the first since Standard Chartered was hit last year by a $667 million settlement on charges it violated U.S. sanctions against Iran, Sudan, and other countries. It was a rare blip for the bank, which agreed to a deferred prosecution agreement as part of the settlement, meaning its U.S. operations are monitored.

The bank is expected to grow earnings and revenues by about 10 per cent this year, lifting pretax profits over $7.5 billion. It aims to increase costs broadly in line with revenue growth, and has said it could add about 2,000 jobs this year.