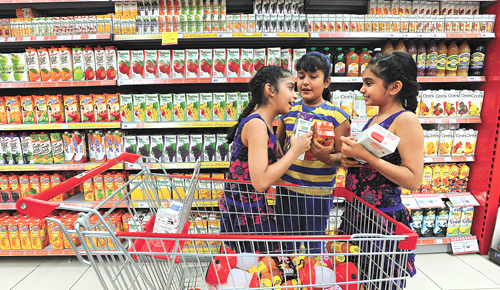 
The bet is on the growing pool of the health-conscious that believes fruit drinks are the real big chill. Godrej's Nature Basket, which caters to the higher end of the market through its 13 retail outlets, has witnessed a 4:1 sales ratio between fruit and aerated drinks. It also vends high-end imported juice brands from the US and South Africa such as Ceres, Pfanner and Florida, priced anywhere between Rs 125 and Rs 250 for a litre as against Real and Tropicana, which fall in the range of Rs 85-Rs 90. "Consumers are more than willing to pay for these brands. Juices have constantly outdone other drinks. It is an obvious market preference where our health-conscious consumers opt for juices," says Mohit Khattar, managing director at Godrej's Nature Basket.

Homi Batiwalla, director-juice and juice drinks at PepsiCo, would like some of that business come his way. "Fruit drinks are the next big thing and we are constantly investing in better technology to get the best out of this market." PepsiCo might have held back from repricing Tropicana this year, but it has tweaked the way it hawks its mango drink Slice, which will now be sold — the only one at that — at three price points. You still get to gulp down from the 200 ml tetra-pack; there's also a bigger-gulp 350-ml Slice priced at Rs 22. PepsiCo has also upped the price of its 500 ml bottle by Rs 3 to Rs 28.

For Spar, a chain of 14 hyper-markets run by Max Hypermarket India, a consumer tilt towards fruit beverages is the trend. "The sale of fruit juices and fruit-based drinks market is twice that of carbonated drinks. The demand for fruit drinks category has been growing steadily at say around 10-12 per cent annually," says Viney Singh, managing director of Max Hypermarket India that also sells mango juice under a private label. "We also house a few regional brands such as Cocojal, a range of flavoured coconut drinks, and Sip On, local mango and apple drink that is sold only in Mangalore."

It also helps that a sipper is born every minute. For most consumers, the lines are fuzzy. Juice, fruit nectar or fruit beverage, it is the pulp that matters. If what you drink contains a generous 85 per cent or more fruit pulp, it can be called juice. It is fruit nectar if there's 25 per cent to 85 per cent pulp; and it is just a fruit-based drink if the pulp is at 25 per cent. To most consumers, it does not seem to matter though — as many just want to have a ‘healthier' or more ‘natural' option than carbonated, synthetic drinks. "The concentration of pulp does drive up the price. You get the sense that it is a more wholesome product. But I think the perceived benefits of having a ‘natural product' remain attached to products along the price curve," says Devangshu Dutta, CEO, Third Eyesight.

Mother Dairy, too, wants to get a few more sweet drops out of its Safal brand. It will now come in 200 ml plastic bottles with a new look. Pradipta Sahoo, head of horticulture business at Mother Dairy Fruits & Vegetables, says the company will look at how consumers reach out to the shelves. "We will tailor our range to future market trends." Safal's range is distributed and sold through 1,000 exclusive outlets in the Delhi National Capital Region and Bangalore.

Then you have Unilever's Kissan. It has farmed out Kissan Soya Juices in three new flavours — apple, mango and orange. Safal makes it clear that it is not juice; its nectar. You will be forgiven though if you mistake Pepsico's Slice to be pure mango juice! Points out Dutta: "Package graphics or point-of-sale collateral does not make the distinctions any clearer for consumers." If it is true, it is a great way to juice your way to the bank.

break-page-break
Parched throats never had it so good. Even Coca-Cola has got juice. The cola giant has re-positioned its ‘pulpy orange' Minute Maid brand (40 per cent pulp) sold in PET bottles till now. You can now get 100 per cent juice Minute Maid in 200 ml and 1-litre tetrapak competitively priced for Rs 20 and Rs 85. It will be sold in three new flavours — apple, grape and orange. "There's enormous opportunity in the packaged beverage market. As a company, our focus has been on offering choice and value to our consumers," says Atul Singh, president & CEO, Coca-Cola (India and South west Asia). There's also Del Monte ‘fruit drinks' marketed and manufactured by Field Fresh Foods, a joint venture between the Bharti Group and Philippines-based Del Monte Pacific.

Orange, mango, apple and mixed-fruit are hits. They collectively make up a whopping 90 per cent of flavours sold. But there is an addition of the new every time the mercury rises to heat up the market. Dabur offers 14 Real flavours. "It is market demand. There is always a section of consumers seeking exotic offerings and we have to be there," adds Chutani. For Dabur, 75 per cent of its juice sales is accounted for by orange and mixed-fruit juice flavour. Cranberry, pineapple and pomegranate are seen as exotic.

Mix & Match
Of course, you still have to sweat it out to get your stuff across the counters. Last summer, PepsiCo experimented with a concept recognised globally. It opened a Tropicana mocktail bar in a New Delhi mall in alliance with Pan India Foods Solutions (the food-court chain promoted by Kishore Biyani and Blue Foods). You got to sip on nearly 10 different mocktails priced at Rs 95 using Tropicana juices. "It was an experiential model and not driven by monetary benefits. We are in talks with more food-court operators to add such kiosks," says PepsiCo's Batiwalla.


Parle Agro, long known for its two fruit-based brands — Appy (juice) and Frooti (fruit drink) — got into the 100 per cent juice segment with its Saint Juices two years ago. Nadia Chauhan, joint managing director at Parle Agro, now wants to play off the health-focused drink platform. Parle has hooked up with medical clinics in Mumbai. You get to sample a drink and free-home delivery if you like it. The idea will now be taken to other cities.

The juices are flowing. Take Del Monte. It relied on institutional sales through a tie-up with Café Coffee Day, Barista and IndiGo airlines when it entered the market about two years ago. It helped Del Monte to short circuit — it was not ready with flavours and production capacity to cater to mass sales. But that has changed now. Says Yogesh Bellani, senior vice-president and head of Del Monte Food: "We now reach 40,000 retailers in over 70 cities. By the end of the season, we should touch 65,000 retailers in 90 cities." Right now, Del Monte is sold in four flavours in PET bottles and cans. Packaging costs have hit the brand hard; it is 20 per cent of the product's cost.

Market leader Dabur has already gone for a 4-5 per cent price hike (Rs 2.50 to Rs 3 a pack) across its range of juices sold in 1 litre and 200 ml tetra-packs. Chutani cites input costs: "Commodity prices, especially of fruit pulp, have been on the rise. We had to increase prices without discounting quality." Pepsi effected a price hike of Rs 3 on Tropicana last April on its 200-ml tetra pack and has held back from a repeat so far. Batiwalla does not rule out another hike down the line. Like Chutani, he will keep an eye on ‘commodity prices'. It is not often that a leader (Dabur) decides it will not guard the price line, and a worthy competitor (PepsiCo) says it is ready to trace the same track. It says a lot. There's a real swirl to the tropical summer this year. Maybe, Del Monte may do a Real: go in for a hike. You, too, can: for a juicy hike. Cheers!

(This story was published in Businessworld Issue Dated 30-05-2011