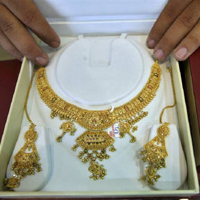 08 November, 2014
Print this article Font size -16+
Global markets continued on their gaining spree taking cues from the much awaited Quantitative Easing (QE3) by the US Federal Reserve and other central bankers to bring the economy back on the growth trajectory. Further, positive outcome by the German constitutional court approving the bailout fund to curtail the sovereign debt crisis also boosted investor confidence. This led to a decline in the demand for the US Dollar Index (DX). The Japanese government also announced stimulus measures to revive the economy which is showing signs of slowdown. The Chinese government approved infrastructure spending plans to foster growth in the nation which witnessed weak manufacturing output for the ninth consecutive month.

Spot gold prices extended gains of the previous fortnight on the back of upbeat global market sentiments. Stimulus measures announced by the central bankers increased the liquidity in the markets thereby forcing investors to shift to gold to hedge against the rising inflation. Additionally, weakness in the DX also added to the gains of the yellow metal. In the domestic markets, MCX gold prices declined 1.3 per cent after touching a historical high of Rs 32,425 per 10 gms. Prices declined on account of sharp appreciation in the Indian rupee.

Spot silver continued with positive gains to the tune of 2.5 per cent tracking firmness in the gold prices and base metals pack. Further, weakness in the DX also added to the gains of the silver. MCX silver declined 1 per cent on the back of appreciation in the Indian rupee. Prices of silver on MCX settled at Rs 63,409 per kg after touching a low of Rs.61,398 per kg on Friday.
Entire base metals pack concluded the previous fortnight with gains of more than 3.5 per cent with nickel posting sharp gains to the tune of 10.4 per cent. Stimulus measures announced by the major economies along with China approving the infrastructure spending plans acted as a supportive factor for the base metal pack. Approval of infrastructure spending and roads-subways construction projects in China would revive the demand for the base metals. Weakness in the DX also supported for an upside in the base metals Decline in LME inventories particularly lead for the fifth consecutive month also added to the gains of Lead prices.

Copper prices gained 3.9 per cent, the least in the base metal pack due to weakness in the DX. Gains were capped on the back of rise in the LME inventories in this month. Copper prices on MCX declined 0.07 per cent and closed at Rs.446.5/kg on Friday on account of appreciation in the Indian rupee.

Nymex Crude oil fell 3.7 per cent taking cues from rise in the US crude oil inventories and additional supplies coming from the Saudi Arabia. However, sharp fall in the prices were cushioned on the back of weakness in the DX. Further stimulus measures announced supported the prices initially.  MCX crude oil prices declined 6.5 percent due to appreciation in the Indian rupee.
Outlook
In the coming fortnight, we expect precious metals, base metals to trade with upward bias as stimulus measures announced is expected to spread the liquidity to the various sectors of the economy for overall growth of the nations.   Weakness in the DX is also expected to support an upside in the commodities pack. However crude oil prices are expected to witness correction after a sharp rise and viewing sufficient supplies of the same. In the domestic markets appreciation in the Indian rupee may however cap sharp upside in the non-agri commodity prices on MCX.

Agri Commodities
With an improvement in monsoon conditions, and the deficiency narrowing down, the entire agri pack was under the grip of bears for a majority of the fortnight. With a sharp revival in monsoon and the harvest period of most of the kharif crops around the corner, the sentiments have turned weak The average deviation from long period average which was around 9% till the previous fortnight is now narrowed down to around 5% below average as on 21st Sept, 2012.

Among oil complex, CPO declined the most at around 11.6 per cent followed by soy oil and soybean which settled 9.1 per cent and 7.8 per cent lower respectively. Increasing inventories on Malaysian palm oil and the brisk pace of the soybean harvest in the US put pressure on the edible oils globally as well as domestically. Start of harvesting of soybeans in Madhya Pradesh, the biggest soybean producing region in the country also led to a fall in the prices. A sharp appreciation in the Indian Rupee has also led the overall oil complex to trade lower.

Spices witnessed mixed trend in this fortnight. Jeera was the biggest loser, declining about 1.6 per cent on account of lackluster overseas demand and improved rains which may prove beneficial for sowing in Gujarat. Turmeric declined marginally lower only by 0.1%. on improving weather conditions in Turmeric producing regions as well as lower demand from north India However, lower arrivals, as the farmers are uninterested in selling Turmeric at lower prices has restricted any sharp fall. Pepper prices gained marginally by 0.1 per cent last fortnight on account of lower supplies in the spot markets. However, sharp gains were capped on account of lower export. Chilli gained 2% on reports of lower acreage, and expectations of a 30 per cent drop in the output.

Among Grains, maize declined by about 2.7 per cent due to a sharp correction in the international prices. CBOT Corn corrected sharply over the last couple of days on accounting of the ongoing harvest in the US. Wheat also declined by 1.4 per cent last fortnight as the government considered allowing more sales under OMSS ahead of the upcoming festive season.
Kapas fell sharply last fortnight, losing about 9.8 per cent after the US government raised its estimate for global stockpiles in 2012-13 to a new record. Reports that China will not issue additional import quotas also supported the bears. Improved rains in Gujarat also further weakened the sentiments.

Sugar prices gained 0.7 per cent in the fortnight on expectations of a revival in the demand ahead of the festive season. A delay in the commencement of crushing in Maharashtra supported the prices. However, good sufficient supplies due to lower exports capped any sharp upside.

Chana declined sharply by 9.6 per cent on reports of an increase in imports from Australia, which is expected to ease supply pressure. Also good rains in MP weakened the sentiments as it improves the soil conditions ahead of the rabi sowing.

Outlook
A Sharp revival in the monsoon across India as well as commencement of the kharif harvesting has put pressure on the prices are expected to consolidate around the current levels in the coming fortnight.  However, excessive monsoon here onwards, may damage crops like soybean, maize and cotton. Any delay in harvesting may also support prices. Spices gain from lower levels ahead to the festive season.