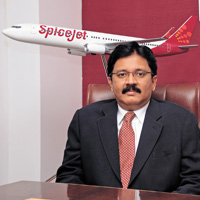 
SpiceJet, on the other hand, has never had any strong name associated with it. Investors in the airline have changed as often as some change clothes, and recalling names of all the CEOs of the airline in its short life of five years is a challenge. Yet, SpiceJet, which has floundered and flourished, has been run by CEOs and boards and has more or less managed to retain an identity despite having no one to call its own.

The airline has been through good and bad phases. It ambled along in good times, and most of its highs coincided with the good times of the Indian economy. In lean phases, it has tended to slip as have some of its rivals. Till yesterday, or rather till Maran stepped in, SpiceJet could not really — unlike rival IndiGo — have been called a force to contend with.

But with the new owner in place, suddenly things begin to look different. The airline has a new CEO (former CEO Sanjay Aggarwal suddenly departed when the deal was clinched with Maran) Neil Mills, an almost new board, a new focus and expansion plan, and a plan to set up a medium-sized regional operation, which is a bit akin to setting up a new regional airline.

Luckily, all these changes are happening during one of the good phases. After close to two years of being down in the dumps, air traffic is beginning to show a sustained rise. Loads for most airlines are up and fares are keeping pace. The days of low fares leading to a blood bath of competition seems over. Low-cost players IndiGo and SpiceJet have lured more flyers away from rivals, who are still struggling to put their houses in order after the 2008 financial crisis.

If the cheer and general goodwill due to the recovery are helping matters, SpiceJet itself has had a good run in the past few months under the efficient Aggarwal. When he took over, the airline was going through a very lean phase — its market share was down to 8 per cent and, worse, the airline didn't seem headed anywhere. But with a new team and a new energy, SpiceJet managed to pull it off. Its market share slowly inched back up to the present 13 per cent or so. It remains second to IndiGo in terms of market share among low-fare options.

A New Flight Path
Now, the airline is entering a new phase of growth. In the past few months, it has started global operations. It has ordered 30 new Boeings and 30 Bombardiers with a fairly aggressive domestic expansion plan in mind. Mills says that on the domestic side, the airline will continue to add new cities (see interview on page 41). It will convert through-connections to direct, and increase the density on some of the routes (3-4 flights a day, instead of 1-2). The new Boeings will replace some of its existing fleet, but a majority of it will be incremental capacity. Even today, the airline is leasing planes to add capacity. Says Mills: "We can't afford to stop growing. We are leasing more aircraft next month as we need to add capacity to keep our market share."
break-page-break
Perhaps the most significant decision is the introduction of a new aircraft — the Bombardier Q400 with 78 seats — to start regional operations. Says Kapil Kaul, CEO of Centre for Asia Pacific Aviation-South Asia: "It is a bit like setting up a brand new airline. This is being taken on even as the airline is going in for an aggressive expansion on the domestic side."

Samyukth Sridharan, SpiceJet's chief commercial officer, has a long list of small cities that have traffic and poor connections, but cannot support a Boeing operation. It is to capture this traffic that the new Bombardier is being inducted. He says the next wave in India's aviation will come from small towns where the population is affluent enough to fly, but doesn't have the option. SpiceJet plans to fly to almost 60-odd new cities including many such as Shimla, Kulu, Vijayawada and Belgaum, many of which do not support Boeing operations. While some of these routes do have flights, they are exorbitant. Says Sridharan: "It is cheaper to fly to Kuala Lumpur or Singapore than flying to Manali or Dharamshala. We hope to change that."

By the end of 2013, if the airline exercises all its options, it will have roughly 50 Boeing aircraft and close to 25 Q400s. And that's when the next order of 30 Boeings will kick in.

Many feel the presence of a strong owner who is focused on returns could work well in favour of the airline. Prior to Maran coming in, the airline's board had become quite fragmented. As one insider puts it, there are both advantages and disadvantages of heavily board-run companies: decisions are not governed by one individual, but the frequent changes in investors and the board lead to too much fragmentation and no clear business plan being followed. "There has been little continuity in vision in the airline," says an industry analyst.

SpiceJet's new CEO says one of his tasks will be to ready the airline for sustained growth. "Growth has been sporadic. Add one or two planes, then stop. Then, add another, then stop again," says Mills. Working in the airline's favour is also the current business environment (aviation has picked up), the fact that it finally has some money to play around with (the sale has resulted in cash reserves of Rs 600 crore) and that it has a new owner with deep pockets and, hopefully, a clear vision. Industry analysts have always argued that it was never clear who owned or was running SpiceJet at any specific point in time. It was more like "currently X or Y is taking interest or running it". This should change and that should work to its advantage.

Further, a lot of people prefer to fly the airline not just because it offers a cheap, efficient product, but many say it is "nicer" to fly than an IndiGo, which, some feel, lacks personality.

Weaker Spots
One of the biggest weak points of the airline would be the lack of a proper team. "Many team members have also quit with Aggarwal. So, there is no real top, middle and bottom rung to speak of," says Kaul. He questions the ability of the present management to pull off this aggressive expansion without a strong team. "It has plenty on its plate and no real team to speak of," he adds. Heads of customer services and human resources development had quit along with Aggarwal, and both positions lie vacant even now.

One of the remaining members of the old guard is Sridharan (recently inducted as a director on the board), who has in his three years at the airline worked with as many CEOs at SpiceJet (Siddhant Sharma followed by Aggarwal, and now Mills). Sridharan argues a fragmented ownership has helped the management run the airline more professionally, and this success has managed to attract the new owner. He cites the decision to go regional to prove his point. "We have been discussing this internally for close to a year and a half, but the final decision happened after the buy-out. Certainly, where it has fallen in place is that we now have an investor who believes in it and is willing to back us to deliver it."

Sridharan feels SpiceJet will be a very "different airline" once the regional network is in place, three to four years on. "We have a clear view of where we are going. Our task now is to get there," he says. That should give confidence to both investors and passengers. Whether it soars or sinks will now depend crucially on the airline's new owner and his new guard.
break-page-break
‘Low Cost Is The Key'
Neil Raymond Mills, CEO, SpiceJet

A rather young (39 years) South African chartered accountant (by training) may not be the ideal CEO for a small, but growing budget airline in India. But that's who SpiceJet's new chairman Kalanithi Maran has handpicked to lead his airline. Neil Raymond Mills was invited to lead the airline while he was working at FlyDubai in Dubai. Mills had spent 12 years prior to that with UK's easyJet — he joined when the airline had four aircraft and left at 174. He says things have often been unplanned for him. He never intended to have a career in airlines, but it "just sort of happened". The suave chieftain spoke to Anjuli Bhargava about his new assignment and the airline's future.

Isn't your international operation primarily aimed at improving the utilisation of your fleet?
Partly. But it is also about providing convenience to our passengers. As far as international goes, we want to serve routes near India where there is sufficient VFM (value-for-money) traffic. We will stick to routes that can be done with the same aircraft (B737-800). If a route needs a different aircraft, it is not for us. Our focus will be Saarc countries  and near neighbours. The oppor-tunity here is about the Indian growth story. It will be a small proportion of our business.

Isn't leasing all your aircraft expensive — as you have been doing so far?
Not really. It depends on the kind of leases you negotiate. Also, remember, you take no risk on the residual value of the aircraft. If you are not in a position to partially fund the aircraft from cash, leasing works out as the best option.

Why did SpiceJet decide to go regional? Buying 30 Bombardiers is a bit like setting up a brand new regional airline.
There is a limit to the number of cities you can add using the Boeing aircraft. The runway simply does not support it. That's where the regional comes in. As of now, our Boeing fleet operates at 37 airports in India, although we only fly to 22. With the new Bombardier, we can access 100 airports here.  The aircraft only has 78 seats. The seats are similar to Boeing. The aircraft is less noisy and quicker. The ATR is the comparable aeroplane, but it's older technology.

We feel the next surge of growth in aviation will come from these smaller cities. A lot of these cities don't have good transportation networks anyway. It is 6-8 hour train journeys versus 45 minute flights. A majority of our flights will be to places where services do not exist today. As we see it, we can make profits from year three on regional operations.

Which cities we fly to initially will depend on where we decide to base the new fleet or where our first hub is. We are talking to Hyderabad, Bangalore and Delhi airports (Mumbai is not an option) for this. This has been on the cards before the change in ownership.

How do you see the market changing between low-cost and full services?
India is a very price-conscious market. So as I see it, not only will the volume grow, a larger proportion of the growing traffic will be captured by low-fare airlines as has happened in the past. Some of the airlines in India are not really low cost. They are low fare, but that is easy to be. Selling things cheap is easy, but producing them at a low cost is the real challenge.