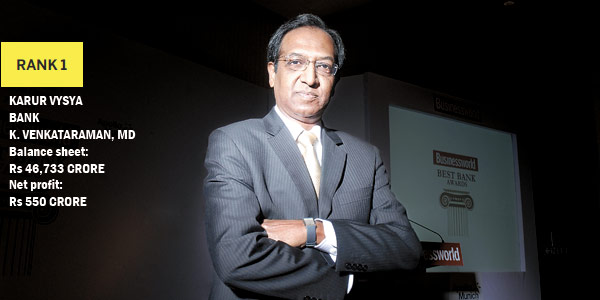 08 November, 2014
Print this article Font size -16+
K Venkataraman, managing director, Karur Vysya Bank (KVB), has a problem with the use of the word ‘old’ to refer to private banks like the one he heads; it is misleading, he says. “People feel we wear dhotis and have tufts on our head. That’s the image people have of us. Do you know the average age of employees out here is 33 years?”

He has a point: just how many banks out there have been around for 97 years, striving to do what founders M.A. Venkatarama Chettiar and Athi Krishna Chettiar set out to accomplish back in 1918 — which is to offer tailor-made credit solutions to the local community? KVB may lack glamour, but no less an investor than Rakesh Jhunjunwala holds around 4.5 per cent in the bank.

Obviously, KVB does what it does well. And that’s why it is the Best Small Bank in BW | Businessworld’s Best Banks Survey 2013 — and, for the fourth year running.

On the flip side, there was a slight increase in KVB’s net non-performing assets, at 0.37 per cent (0.33 per cent). What’s worth mentioning is the bank’s provision coverage ratio to protect against non-performing assets, at 95 per cent, again well over the RBI stipulated 70 per cent. As a cautionary measure, the bank has decided to limit its realty exposure to 50 per cent of the project cost.

Bucking The Trend
Fiscal 2012-13 saw industrial production slide and inflationary pressures hit consumers hard. Even so, KVB grew its business. “I asked my managers to eliminate risky accounts,” says Venkataraman. The bank went slow on loans at the start of the fiscal when it realised that monetary tightening was a year-long phenomenon.

“There is a slowdown because of internal factors; activity in cement, steel, power and coal sectors has been affected because of high costs of production,” he says. “All our manufacturing customers have become very cautious; companies that borrowed to add capacity in the early part of fiscal 2013 have cut capacity and no longer want to service high-cost debt.” His suggestion: stop inflicting blows on the economy, increase power supply and speed up mining of coal rather than import.

What baffles Venkataraman is the belief that elections will kickstart economic activity. “Elections are going to happen either way, but that cannot alter growth. My priority has been to help exporters, but infrastructure bottlenecks are not making it easy.”

Size Matters
In 2010-11, the bank took its network to 400 branches from 200. Venkataraman has been a strong votary of the need for KVB to have a national presence and not remain restricted to Tamil Nadu and Andhra Pradesh. It now has 563 bank branches across the country with a focus on western and eastern markets. In 2014, Venkataraman wants to keep KVB in the hunt for large bank status.

The Boston Consulting Group has been hired to draw up a roadmap to take KVB to 800 branches by 2016, its centenary year. In the interim, it wants to ride on growth in its southern stronghold and believes that Tamil Nadu, Karnataka and Andhra Pradesh can provide the impetus needed for a larger national footprint.

Venkatraman believes mobile operating systems can help KVB expand banking to lower-income as well as corporate customers. The bank is in the process of implementing the Interbank Mobile Payment System through Net banking to enable customers to make fund transfers, even to accounts in other banks.

Outside of banking, the KVB MD loves to watch National Geographic, Discovery and Animal Planet channels on TV. He is an avid traveller. “I cannot forget Egypt, and the wildlife in Kenya. I also like going to places of historical interest like Konark.”

Which only goes to make one thing very clear — the KVB head honcho is not into dhotis and tufts.