Spectrum: COAI Says Call Rates To Go Up By 30p/Min 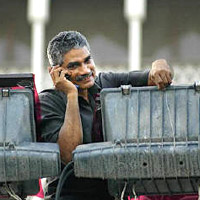 Disappointed with Cabinet decision on fixing minimum or base price at Rs 14,000 crore for spectrum, the telecom industry said on 3 August the recommendations will prove to be "regressive" for the sector's growth and that operators would be forced to raise tariffs for consumers.

GSM operators body COAI, which counts Bharti Airtel, Vodafone and Idea Cellular among its members, said the move will impact tariffs by 30 paise per minute on an average.

"It will continue to have an impact on the tariffs to the extent of about 30 paisa per minute. The effect on finances is that an amount of Rs 3,20,000 crore of additional debt that will have to be laid on the industry," COAI said.

Also, the banking industry itself has said that it would be near impossible to continue to fund this type of a demand for investment funds, he added.

"So the only thing that this is going to balance is perhaps the budget of the country if at all even that. So we really don't see any benefit that this decision does to the industry," Mathews said.

KPMG Executive Director Jaideep Ghosh also said the pricing is on the higher side and that tariffs for consumers, which have gone up recently, would continue to "firm up".

The Cabinet, headed by Prime Minister Manmohan Singh, has decided to fix the reserve price at Rs 14,000 crore for 5 Mhz of airwaves as against around Rs 18,000 crore recommended by sectoral regulator Trai for spectrum auction.

The Supreme Court had, in February this year, cancelled 122 licences issued by the then Telecom Minister A Raja in 2008 and asked the government to conduct fresh auctions by August 31.

But this deadline may not be met and the government may approach the apex court for extension of the timeline.