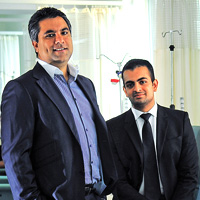 08 November, 2014
Print this article Font size -16+
A couple of years ago, Francis, 31, a former BPO worker in Bangalore, found that undiagnosed hypertension (high blood pressure) had damaged his kidneys. They could no longer perform their most vital function — ridding the blood of impurities such as urea and extra fluid. His doctor advised dialysis — Francis would be hooked up to a ‘dialyser', a machine equipped with a so-called ‘artificial' kidney that would cleanse his blood. He would have to do this thrice a week for four hours each until he found a kidney donor.

For a year, Francis went to a multi-speciality charitable hospital in Bangalore. Hygiene was an issue. "The sheets weren't clean," he recalls. He shared the room with persons with HIV and hepatitis C — increasing the probability of  infection if equipment wasn't cleaned properly. Worse, medical students at the hospital were learning at his expense, damaging two of his ‘fistulas' or surgically made access points within the arm for the blood to flow out to the dialyser and back in. Fistulas are generally made in the left arm (the less used one) but with those damaged, Francis had to get it done on the right arm. He was desperate for an alternative.

Then he heard of NephroLife Care, a facility devoted to kidney care that opened its doors early this year. Francis switched. "It's clean, and they take good care of us," he says in a phone interview. Among the things that changed, Francis was put on a different floor from HIV and hepatitis C sufferers. This is standard policy at NephroLife. "Nephrology (kidney care) is not an area where India can claim world-class standards," says Shiram Vijayakumar, 29, founder and managing director. He wants to change that with a chain of focused clinics.

Roughly a year ago, when BW put single-speciality hospital chains on its cover as the next big thing in Indian healthcare, Vijayakumar was hatching plans for such a venture.

It is a calculated bet. Unlike a hospital catering to all disciplines, a focused kidney centre needs far lower capital and is relatively easily scaleable. There is potential. Diabetes and hypertension — both reaching epidemic proportions in India — are the two most significant causes of kidney disease. But patients are under- served. When investing, hospitals prioritise big ticket disciplines such as cardiology and oncology over nephrology. India has a shortage of nephrologists or doctors focused on kidney disease, transplantation and dialysis. Few teaching hospitals offer courses in the subject. For these and other reasons — importantly, the expense — each year less than 4 per cent of the 200,000-300,000 persons that get end-stage renal disease have access to care.

Call In The Experts
Dialysis lies at the core of NephroLife. Its quality is NephroLife's biggest "selling point", says Vijayakumar. The company has invested in Japanese dialysis machines. They are cleaned mechanically and not by hand. Tubing carrying blood is changed after one use to avoid infection. The machines are networked to capture data into a central computer (where it is monitored) in what Vijayakumar says is a first for south Asia. This information — such as the removal of fluid, blood pressure, etc. — would otherwise have to be jotted down by hand at half-hour intervals at the patient's bedside. It also has a modern operation theatre to create surgical access points for dialysis.

Unlike most hospitals where nephrologists see dialysis patients during their rounds, NephroLife has two full-time nephrologists. It also has allied services such as psychological counselling and an in-house pharmacy with discounted drugs. A dietician works with the patient to chart out an ideal diet (including fluid intake) that can prevent load on the kidneys and reduce the frequency of dialysis sessions. Francis now only goes in twice a week.

Then, there's the patient experience. Each patient has an IPTV, imported medical recliners that stay cool in spite of the constant weight of reclining patients, and attendants to fetch lunch or snacks. The idea is to eliminate the need for a ‘caregiver' from the patient's family.
The centre also offers a pick-up and drop service for a fee. At Rs 1,350 per session, dialysis is priced somewhere between the charitable and the corporate hospitals in Bangalore.

The Economics
A NephroLife clinic costs $1.2-1.5 million to set up. It leases real estate to keep costs down. The operating theatre investment is optimised by using it for kidney stone removals and other urological day-care procedures. Break-even is under a year, says Dev Kumar Roy, chairman and a large investor in NephroLife. While NephroLife has funding for four centres, the cash that the first three generate could bankroll some more, he says. NephroLife is now targeting cities such as Hyderabad and Chennai.

Abhishek Singh, associate director at consultancy Technopak, estimates the current dialysis market at Rs 1,300 crore. And this is only with roughly 10 per cent of those who need dialysis availing of it, due to lack of affordability and access. With rising incomes, this could increase. "Large corporate hospitals and other entities who are not currently in healthcare are looking at this area," he says. Apollo Hospitals, for instance, has an alliance with Trivitron for this.

Can a standalone centre stand up to the large hospitals? Singh thinks so, provided they serve patients ‘holistically'. That could include regular investigations, a pharmacy, and access to specialities such as diabetologists and cardiologists. A standalone centre is more likely to be cost-effective than a large hospital, which has a different cost structure, Singh says.

On the flipside, it might be challenging to hire nephrologists since initially it cannot compete in volumes with the large hospitals. "Doctors don't come without patients and the other way around," says Roy. Unlike a large hospital, NephroLife is not equipped for a big-ticket procedure such as kidney transplantation. "We have to create incentives."

Still, it has attracted nephrologists such as Sushma Rani, who has worked with SGPGI, Lucknow, a renowned government hospital. What she saw in Nephrolife was not just infrastructure but rigour, Rani says. Importantly,  she gets the flexibility to do kidney transplants in other hospitals. NephroLife has a tie-up with tertiary care hospital BGS Global.

Affordability will continue to be a challenge. At Nephrolife, roughly 10 per cent of the patients have dropped out for cost reasons, says Vijayakumar. But 30 per cent are insured and hence don't feel the pinch immediately. The rest are paying out of pocket. It's a small start.

With inputs from Snigdha Sengupta