Veteran Malayalam actor Mohanlal took to Twitter to share a lovely picture of Sushant and wrote: "May you rest in peace."

Several South Indian celebrities, including Prithviraj Sukumaran and Ram Charan expressed shock and grief over the passing away of Bollywood actor Sushant Singh Rajput on Sunday.

The actor allegedly committed suicide by hanging himself at his Bandra residence in Mumbai, the police said.

Veteran Malayalam actor Mohanlal took to Twitter to share a lovely picture of Sushant and wrote: "May you rest in peace." 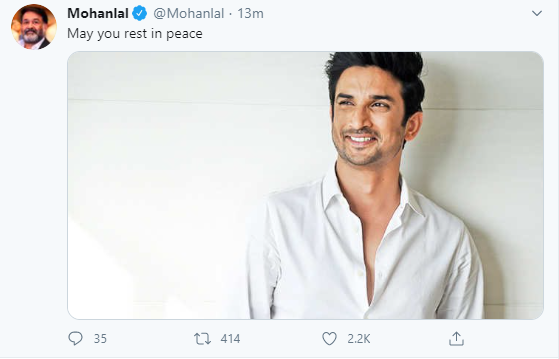 The 'Aiyya' actor, Prithviraj Sukumaran too shared a monochrome picture of the late star on Twitter and wrote: "Rest in peace Sushant." 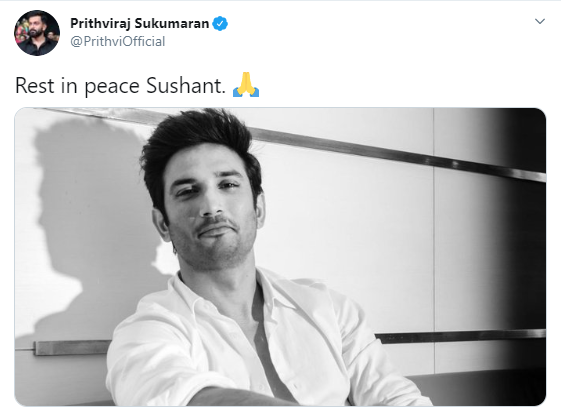 "Shocked to hear that Sushanth Singh Rajput is no more. An incredible talent who was destined to scale many heights is gone too soon. Rest in peace. My prayers and strength to his family," the 'Magadheera' actor tweeted.

Actor Dulquer Salman said that he is "absolutely heartbroken by this news."

"Not someone I met or knew personally but this really hits you in the gut. So talented and so young. RIP #SushantSinghRajput," 'The Zoya Factor' actor added.

'Premam' actor Nivin Pauly, likewise, explained how distressful it was to hear the news of the young actor's sudden death. 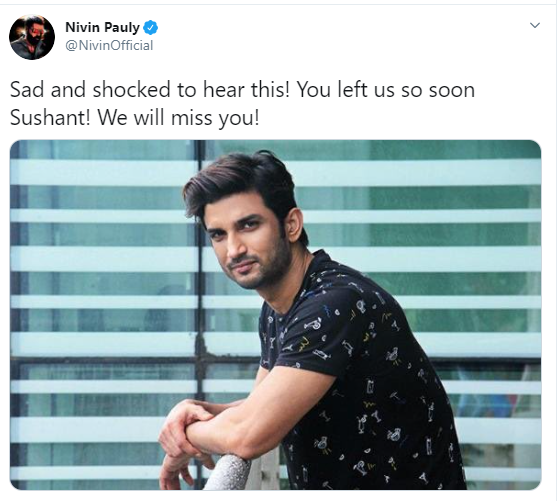 "Sad and shocked to hear this! You left us so soon Sushant! We will miss you!" he tweeted.
Sushant, 34, committed suicide by hanging himself on Sunday, Additional Commissioner of Police Manoj Sharma confirmed. However, no suicide note has been recovered from Rajput's residence, as per the police and further investigation is underway.

The body of the actor is brought to Dr RN Cooper Municipal General Hospital from his residence in Bandra.

As per the latest development, the actor has died apparently due to hanging but police can tell the exact cause of his death only after receiving postmortem report.

So far, we have not found any suspicious object, said Abhishek Trimukhe, DCP Zone 9, Mumbai.