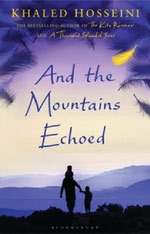 08 November, 2014
Print this article Font size -16+
Beauty is an enormous, unmerited gift that is given randomly, foolishly” says Markos Varvaris, the Greek doctor working in Kabul about the girl with the disfigured face, Thalia. It took the dog a few minutes to give her new face, but a lifetime for her to come to terms with it. Her mother, on the other hand, never does. The story is just a small sub-plot in Khaled Hosseini’s latest novel ‘And the Mountains Echoed’, but encapsulates the larger theme of the story, that of people who have to deal with the fate of others.

Hosseini’s earlier novels dealt with how people dealt with their own fate, and their inner demons. In this, he explores the other side of the equation, the lives of the fortunate – those who are free to make choices, and how they choose to use that freedom.

There is the father who sells his daughter to a wealthy couple in Kabul; the wife who leaves her paralysed husband behind in the care of his chauffeur, to start life afresh in Paris along with her young daughter, and a sister who is saddled with the care of her quadriplegic twin.

But aren’t there consequences to these choices too? Can you brush aside the guilt of having taken those choices just as easily? On the other hand, where do you draw the line? These motifs all come up repeatedly in the several stories that make up the novel.

And then there are those who are fortunate by virtue of their birth. How do they deal with the misfortune of others they come across? The stories explore how people end up justifying their better fortune, perhaps as a way of reconciling with inaction.

And the Mountains Echoed can best be described as a series of short stories which share characters along, and which neatly ties into its climax in the end. There is Pari, who as a three-year-old is given away to a wealthy couple. Her father justifies it by telling the story of a child his father deeply loved, but who must be sacrificed to a Jinn. Pari lives on in relative grandeur, but with the awareness of something from her past that leaves a hole within her. Her quest to fill that void forms the thread that connects the stories.

Many of these stories traverse a time horizon of decades, and several continents, alternating between first person accounts and narration. It takes a skilled writer to ensure that the reader doesn’t get lost in this ambitious milieu, and for bringing it all together, Hosseini must be applauded. You could wonder whether some of the characters, deserved the number of pages devoted to them in the context of the larger story, but at 400 pages, the story never becomes a drag on your attention.

There have been several debates focused on where Khaled Hosseini stands in terms of literary genius. But that is to miss the point. Here is a writer who writes in the most fluid prose, and tells a story like you don’t want it to stop. That remains in Mountains.., with a much deeper plotline without the descriptions of cruelty that were a hallmark of his earlier works.