Sorting Out The Issues 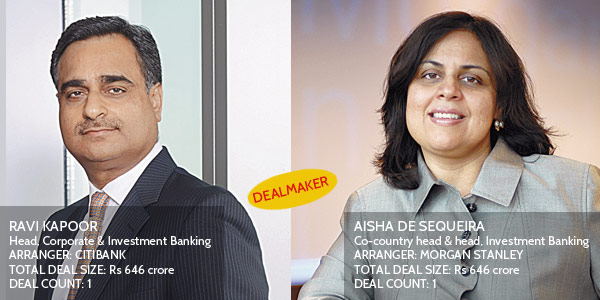 08 November, 2014
Print this article Font size -16+
For investment bankers, 2013 was one of those years their B-school teachers had warned them about. Their lifeblood, that is deal flow, was down to almost a trickle. For IPOs, it was an absolute standstill — 26 companies raised just Rs 1,620 crore through all of 2013, according to Grant Thornton’s data. Twenty of these issues were for less than Rs 10 crore. Only Justdial (Rs 927 crores) and Repco Home Finance (Rs 270 crore) were of a significant size.

In this barren landscape, Citibank shone like a beacon. Not only did Citibank spearhead the Justdial offering (along with Morgan Stanley), it also played a part in major government divestment programmes where PSU shares were sold through follow-on public issues, including NTPC and Power Grid, according Ravi Kapoor, head, Corporate and Investment Banking, Citibank India. Morgan Stanley, joint topper in the IPO dealmaker category, could not participate in this story.

The Justdial IPO was priced at an enterprise value at least 10 per cent higher than its closest rival. “Justdial was an instance that enabled us to educate, excite and sell a new age idea to investors,” says Kapoor.

Kapoor lists a series of challenges while describing the market in 2013. The slowdown had already begun in 2012. The US Federal Reserve warned of a taper in bond buying. Though it did not happen last year, it kept foreign investors circumspect about their investments. A depreciating currency made withdrawals more expensive. In July 2013, faced with the task of defending the rupee, the Reserve Bank of India introduced its own measures to keep capital within the country. Secondary markets were volatile. Not surprisingly, the primary market remained staid.

If 2013 was bad, 2014 promises to be just as bland. So far, the only activity lead bankers are looking forward to is from the government disinvestment programme, at least till the impending elections. Citibank has been a major player in the segment, says Ravi Kapoor, having worked on almost all the big government offerings over the past few years.

There is a pent-up demand for growth capital, says Kapoor. If the investment cycle begins afresh, there will be ample demand, which is why the nature of the mandate for the new government becomes important. But what happens if that remains elusive? Investment banks will have to look for other options, he says. For example, at listing companies on exchanges outside India — such as Singapore. “Banks will offer diversity and alternative platforms to their clients for raising capital,” he says. Last year saw several big banks across the world retrench significantly. Citi says it plans to keep its team intact.

Today’s market thrives on hope. But the scenario could change. The year 2009, also an election year, started out just the same. But once the elections were out of the way, the deal flow was beyond anything the industry had witnessed till then. Perhaps this time, next year, we will be spoilt for choice when it comes to claimants for the investment banking awards. The bankers would not be complaining then.