Soon To Be True 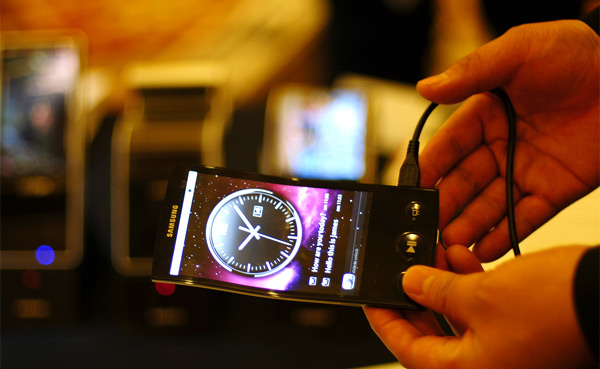 08 November, 2014
Print this article Font size -16+
They've been hiding in the shadows, gathering momentum over the past couple of years yet waiting patiently for their moment to strike. Of course, I'm referring to the big trends in consumer tech that will finally see mainstream attention in the year ahead. Looking at the list, some of these may read like science fiction, but trust me; all of these technologies and trends are very real! Have a great new year, folks!

Flexible Devices: Probably the first to lose its science fiction status and translate into science fact is the flexible display, and it isn't long before one of the major players hit the market with a flexible smartphone. Yep, you read right - a phone that has a bendable rubber body and a flexible OLED display — that's pretty much the same technology companies are already using in some of their television sets and smartphones, only more durable and unbreakable.

You may well ask — what's the big deal about a flexible display? Not necessarily the part that it can flex in your back pocket alone — the key here is that these flexible devices can be incredibly tough and substantially less prone to scratching and cracking than their glass counterparts. The big question is — who's going to deliver the promise? Samsung and LG have the tech in place, but it could be anyone — from Apple to HTC to Google — who commercialise it first. Rumors trickling in suggest that Samsung may unveil a 5.5-inch flexible screen device as early as the Consumer Electronics Show (CES) at Las Vegas next week, and this may well be a key component in their next S-series flagship phone, the Galaxy S4.

3D Printing: The concept is mind-blowing. You build a 3D design of your own in one of many freely available 3D modeling applications (or download something you like from the Internet), choose a material like ceramic, precious metals, glass or plastic, and hit go. Right as you watch, the object is built, layer-by-layer, with lasers cutting through the material to build anything from a plastic trinket to an ornate metal night lamp. Of course, the $2000 sticker price of owning a home 3D printer puts it out of reach for most right now, but prices are set to drop and I expect at least a few niche 3D printing services to open up in major cities in 2013 to cater to what can only be described as the ultimate custom gift making idea!

Taking the idea forward, the promise of 3D printing is that it can potentially usher in the next industrial revolution - the personal production line. Small players based out of a garage will potentially be able to invent things, experiment and go to market with products faster than at any time in our history. Certainly one of the most exciting spaces to watch!

Gestures Control Everywhere: We've all loved how easy Microsoft's Kinect technology makes it to play games and control the console, and there are forces at work to make gesture control a reality across your devices. Take a look at the Leap Motion controller - this diminutive iPod-sized device sits in front of your computer and can detect your hand movements with an accuracy of 1/100 of a millimeter. What the engineers at Leap Motion have done is create the 3D user interface of the future — no keyboard, no mouse, and no touch screen either! You just move your fingers in the air, and with zero lag and pinpoint accuracy, the corresponding stuff happens on your screen. Think of Microsoft's Kinect controller, but way better. The guys at Leap Motion claim it is 200 times more accurate than anything on the market, and you don't have to stand up in front your TV a la Kinect to make this tech work! Imagine the possibilities — you can flip through photos or presentation slides, paint a picture, manipulate a 3D model, point a pen and sign on a document by just signing your name in the air, play that first person shooter with nothing more than your bare hands — best of all, you don't need to read a manual to use your hands, right? Leap Motion isn't alone in this space, with several others including SoftKinetic and Tobii also showing off ready-to-release products. One thing is clear - this could revolutionize the way we interact with devices the same way the original touchscreen did.

Big TVs: Come 2013, you're not going to be able to miss the onslaught of 4K UltraHD, a new format being pushed heavily by the industry that quadruples the total display resolution of today's best Full HDTV! When you see one in person, the effect is jaw dropping, to say the least! The trouble is that content just isn't there at this point of time, and price tags are nothing short of stratospheric. What's interesting me more is the second screen effect — how TV watching is getting more and more social an experience. Studies suggest a high percentage of TV watchers now consume television content with a smartphone or tablet in hand, and post on social media alongside a fair bit of the time as well. Expect apps and social media hooks in TV programming content to explode over next year — this will not only mean a richer viewing experience, but that you end up taking the TV programming with you even when you switch off the TV and walk out of the door.

The Desktop Is Dead: A sobering thought, but 2013 may well be the year that our faithful companion for all these years will be given a final sendoff. The writing has been on the wall for a while now — laptops, smartphones and tablets have been gaining market share and desktop sales have been in the decline — but nothing underscores the point more than the recent Windows 8 campaigns — there's just so much focus on the touch-enabled laptops and tablets that I don't see that little beige box surviving past the next year…

What this trend may translate into is the rise of the all-in-one (AIO) desktop, the one-piece desktop, if you will. People are drawn to these systems for many of the same reasons they've always liked desktops PCs - they allow for more immersive experiences and better internals, plus they can be stylish additions to your home's décor.