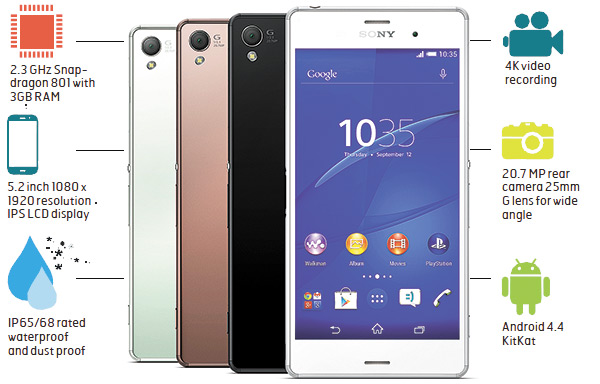 08 November, 2014
Print this article Font size -16+
It wasn't that long ago that we saw the Xperia Z2 launched. And now already, here’s the Z3, shown off first at the IFA show in Berlin earlier just this September and already here in India. With all the Zs being turned out that rapidly, one can’t expect dramatic changes from one device to the next.
And so it is that the Xperia Z3 is an iteration — but a good one.
Sony has been going with a sharp straight-lined design for its Z smartphones for a while now. But with the Xperia Z3, Sony has let go of the sharp edges and has rounded them for a more comfortable grip. It’s interesting how Sony has managed to retain its signature look and yet make this change. A friend who saw the Z3 in my hand was instantly captivated with the “snazzy” gadget I was lucky enough to be carrying. I reminded her the gadget would go back soon enough.
As with all big smooth smartphones, there’s some slipperiness, so new owners should watch it. Sony has done away with the beautiful purple colour option, but they have a bronze-gold that looks very elegant.
The Z3 is of course, waterproof and dust proof like its predecessors, if you keep the flaps on the side firmly closed. That’s one of Sony’s USPs though personally I think too much is made of this feature. The corners have some shock absorption to them and the device is overall tougher.
I was one of the detractors of the display on the original Xperia Z but now the screen is nice and bright and clear with natural colours and good visibility from all angles even though the resolution isn’t at the highest as is the case with other flagships. The sound on this device is rather nice through two front speakers, and really very good from the video you shoot using the device.
You can connect the Z3 to your Playstation 4, though I wasn’t able to test this. You connect your phone wirelessly to the PS4, both being on the same Wi-Fi network, and your phone can be the screen for the PS4. You’ll need a controller and a dock.
The Z3’s camera is very capable, specially if you work with the manual mode and get to know the camera. Low-light sensitivity is good so you can experiment with photos in varying light conditions. The 25mm ‘G’ Lens means wide angle shots. The ISO extends to 12800 and you have less noisy shots. There is a software stabilisation to get steady images. The camera software gives you lots of features including a timeshift burst, AR effect, sound photos and more. Video recording is 4K if you want it to be. The device does heat up a little while doing this though and may warn you.
Sony’s interface and the applications they have on board don’t cause any glitches and lags with Android 4.4.4. It’s at heart a light interface and works pretty smoothly. Browsing, videos, gaming, is all a cinch.
Battery consumption is one of the strengths of the Z3 and it has two levels of power saving to get the most out of that battery. If usage is light, you can actually get two days of juice out of it.
Now to get to who the Z3 is for. Well, for those who have the money for flagship, of course. For those looking for a less expensive proposition there’s the Z3 Compact at Rs44,990 and the same specs in a smaller body. Fans of the Sony flagship who own the Z2 may not find the Z3 enough of a change, but anyone who owns the original Z1 definitely will. At Rs 51,990 the Z3 isn’t cheap — but then neither are the other flagship phones.

Iball Slide WQ32 Tablet
You'd think it was a run of the mill Android tablet until your eye falls on the Windows logo on this 8-inch tablet. It's plain and straight forward and at the same time doesn't look in the least cheap. It's worth considering for someone who particularly works with Windows and Microsoft Office, but lightly and on the go.
The "Slide" tablet is Intel Atom-powered and Windows 8.1-based. You have to sign in with your Microsoft account and you store your files on OneDrive or transfer them via USB to other storage. You do have a micro-SD card for expansion by 64GB to add to the 16GB on board and a SIM slot as well. The 1280x800 pixel IPS HD display is really rather nice — clear and good with colours and angles. Responsive too. Sound however, is thin and tinny. The Intel Atom Z3735D 1.33GHz, processor and 2GB RAM keeps it moving along quite satisfactorily. There's a a 5-megapixel autofocus primary camera with flash and a 2-megapixel front camera. You have all the connectivity you need on this little tablet and can use it for presentations, connect to a USB drive etc. The battery, which is probably what makes the tablet a little heavy, lasts a good 8 hours.

The Firefox Phones
Think absolute barebones when looking at a smartphone based on the Firefox operating system. Two phones, recently launched, by Spice Mobile and Intex, are so basic as to be almost feature phones. But the idea of these is to get at the first-time user who needs connectivity.
Fire One Mi-Fx 1, from Spice, is a small easy-to hold handset with a plastic back and an extra silicon back cover. Lower your expectations to align with a price of around Rs 2,300 and you find that you have a workable device. It's a dual SIM, with micro SD slot and a passable battery. There's even a VGA camera on this handset.
Firefox doesn't particularly stand out when you look at it. It's got a basic home screen and app icons much as usual. You have a bunch of pre-loaded apps and can access the Market place for a few more. You can get to the social networks, but, no Whatsapp.
The Intex Cloud FX, the other Firefox entry, is very similar. A slightly lower specs sheet bit a slightly lower price as well, at Rs 1,999. Screen, sound, camera, are all terribly basic. Neither of phones has 3G connectivity.