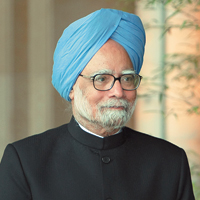 08 November, 2014
Print this article Font size -16+
Prime Minister Manmohan Singh and Congress President Sonia Gandhi have been named among the top 20 most powerful persons in the world by Forbes magazine in its annual power rankings which placed US President Barack Obama as number one for a second year in a row.

Gandhi dropped a notch from last year's list and ranks at number 12 this year ahead of Chinese Vice Premier Li Keqiang and French President Francois Hollande.

Forbes said the 65-year-old leader of India's ruling political party has the reins of the world's second-most-populous country and tenth-largest economy. "Son Rahul is next in line to take over India's most famous political dynasty," it added.

Coming in at the 20th spot is Singh, the Oxford and Cambridge-educated economist who is the architect of India's economic reforms. Singh had ranked 19th in the list last year. "But Singh's quiet intellectualism is increasingly seen as timid and soft," Forbes added.

Ambani, owner of the world's most expensive private residence, ranks 37th in the list. Forbes said the petrochemical billionaire is India's richest and Reliance Industries is the nation's most valuable company.

It however described Ambani's support for disgraced former Goldman Sachs Director Rajat Gupta as a "low point" for him in 2012.

Mittal, ranked 47th in the most powerful people list, has a net worth of USD 16 billion but also has "lots of headaches, including S&P and Moody downgrades of his company's debt to junk status." A highlight for Mittal during the past year was carrying the Olympic flame in the 2012 Torch Relay.

The decisive winner of the 2012 US presidential election, Obama now has four more years to push his agenda even as he faces major challenges, including an unresolved budget crisis, stubbornly high unemployment and renewed unrest in the Middle East.

"But Obama remains the commander-in-chief of the world's greatest military and head of the sole economic and cultural superpower--literally the leader of the free world," it said.

The second most powerful person in the world also happens to be the most powerful woman, German chancellor 58-year-old Angela Merkel. She jumped up from the number four position last year to take the runner-up spot on the 2012 list.

Forbes termed Merkel as the backbone of the 27-member European Union, one who carries the fate of the Euro on her shoulders.

Forbes dropped US Secretary of State Hillary Clinton from the list this year. Clinton, who had ranked 16th last year, does not feature in 2012 rankings as she is not expected to return to her powerful post for Obama's second term.

It is for the same reason that US Treasury Secretary Timothy Geithner also does not feature in this year's list.