Solutions To Light Up 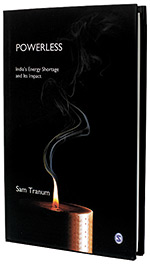 08 November, 2014
Print this article Font size -16+
India has all along been starved of energy. Be it crude, coal linkages, natural gas or uranium, demand has always been ahead of supply. Import of crude oil has been the biggest drain on the country’s foreign exchange reserves at all times. The question is: Is there a way out for the country? That’s what Sam Tranum, who has been a journalist with many publications in the US for a decade, tried to tackle.

Powerless is peppered with all kinds of data on coal, oil, gas and nuclear energy in the country. It also raises many questions, including what will happen in the future as demand rises further and whether import is the only way out for the country. While India is importing a large chunk of its energy needs, Tranum has raised issues on the state of the country’s infrastructure to meet rising future demand.

The author starts off with the two successive national grid failures in 2012 and points out that unlike in developed nations, Indians are prepared for power failure. Since India has perennially been short of power, most middle class homes have invertors while diesel generators support industry. India has a locational advantage in being close to the Middle East which caters to a large chunk of fuel needs globally. But, in case India wants to source natural gas from the Caspian Sea, the pipeline has to pass through Pakistan, which means there is a security issue to contend with. Also, unlike in Europe, India cannot import electricity from neighbours.

An off-beat suggestion that Tranum offers is that India could step off the path of energy-intensive Western-style development and chart an entirely new, low-energy course that focuses on renewables and alternative energy.

No country has successfully based its power needs largely on renewables. Also, while India has access to solar power, for it to become a viable business, costs have to come down drastically. That could happen, not immediately but over a period of time.

Till then, India has no choice but to ape what the rest of the world did to meet their energy needs.