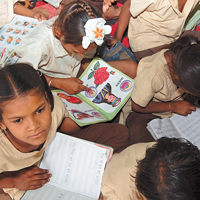 08 November, 2014
Print this article Font size -16+
They say every era is being dominated by a trend, a fashion and a drift vis-à-vis the modus operandi in work compass of a sector. If we talk of the social sector then we bode nothing different here either. The not for profit or the NGO sector which is parallel to the corporate side of the world entwines its working style with the "for profit" sector; but in a different manner. Hence, the productivity of this sector also, which is equally as important as the corporates, follows bit of the same trend as they do. Of course not for profits have their own set of limitations to deal with.

Not long back if we spoke of the Indian social sector using digital or internet marketing for awareness and raising money for the needy then it would have sounded bit sardonic as the pre conceived notion about the NGO's were still as of those institutions who do only believe in conventional form of raising funds through their own medium. But as the sector has been growing and evolving in India, new means and mediums of communications, publicity, awareness and generation of funds have been introduced to these institutions by various means. One of the most advanced and effective medium is coming up as digital marketing and usage of social media for connecting to people directly.

Way back in 90's or early 2000 the social sector has been raising funds via direct mailers and greeting cards and face to face interactions but the sector has witnessed a dynamic change within last 5 years by using the digital mediums of marketing and brand awareness. All thanks to various social networking sites which allowed people, as well as organisations to display shades of their causes and products with a more effective way and self-explanatory representation which minimalises human intervention unlike the conventional way of marketing. Today bigger and international organisations like SOS Children's Villages of India, Unicef, Save The Children' Cry,Greenpeace and lot of the other  not for profit organisations are proactively using the digital media and social networking platforms for creating awareness and generating funds through digital marketing. Social platforms like Facebook, Twitter, LinkedIn and many others have come in handy for these institutions to make people aware about their cause, projects and most importantly enhancing their brand values.

Social networking platforms are a low cost and very media, especially for cause related marketing as its statistically proven that the impulse created on a social platform tends have a long lasting and a steep effect on the mind of the potential benefactors who wish to come forward and help towards the cause. Statistics also say that 80 per cent of the internet users visit social networks and blogs and spend 22.5 per cent of their time on these sites. And the best part about it in present context should not be "word of mouth" but the thumb impression of likes and the hash tags as every international NGO operating in India has average 3000 Facebook likes and 4000 Twitter followers. More over the sector has now also moved along as it realized that conventional method might turn up to be retrograde hence they are trying to be at par with the corporate world and take advance medium of creating brand awareness through search engines and relevant websites which have high number of unique visitors which allow display on advertisements on them.SOS Children's Villages of India today uses Google as one of its most important medium to create awareness and route people to their website through search engines and through other free of cost tools provided by Google which really has been instrumental for them not only in creating awareness or increasing site's traffic but also in adding new supporters for their various projects where children who don't have parents live in a family kind of environment along with a foster mother.

Recent times have witnessed the penchant of the social sector towards the social media as the response and the transactional time over internet is much faster in comparison of conventional methods. This allows organisations to interact and interface with their prospects on a one to one basis via blogs, tweets, comments and personal messages which has an amazing turnaround time and the NGO sector at present is leaving no stone unturned in terms of attending these prospects and responding back to them in no time which certainly has added a pinch of extra professionalism in this sector which earlier had an impression of being kind of laid back in terms of response rate. The communication and connection and relationship between donors and organizations have perceived new highs due to these practices.

It seems that the NGO sector is benefitting from the social media probably not as much as the corporates in terms of scalability — since unlike corporates NGO's don't have million dollars marketing budgets — but in terms of best practices and conversions considering the limitations and lack of manpower, the sector has it would not be foolish to say that it still is running at top gear and with the same kind of dynamic milieu and technical knowhow the NGO sector is poised to grow in multiple folds for sure. In my opinion it's just the beginning of the rise of this sector which is still shaping up but it certainly has given up the status of amateur and is a pro now and with 61 million active internet users currently in India which is scaling up only with every passing day the NGO's have buckled up to have their share of the pie out of this chunk and the day doesn't look far when the social sector will not be treated any differently in terms of best practices for digital marketing than corporates. And the best part of this sector is the more people you add in your cause is more hands you reach to support which helps for the betterment of country and its citizens.