Mumbai (Maharashtra) [India], September 15 (ANI): After veteran actor and Rajya Sabha MP Jaya Bachchan slammed those who are tarnishing the image of the Indian film industry in the Upper House of the Parliament, actor Dia Mirza and Genelia Deshmukh supported the statements of the lawmaker.
The 38-year-old actor expressed gratitude to the senior actor as she spoke for the industry and tweeted, "Jayaji is absolutely right. So grateful that she spoke up for our industry. We are always committed to contribute towards social upliftment and social good." 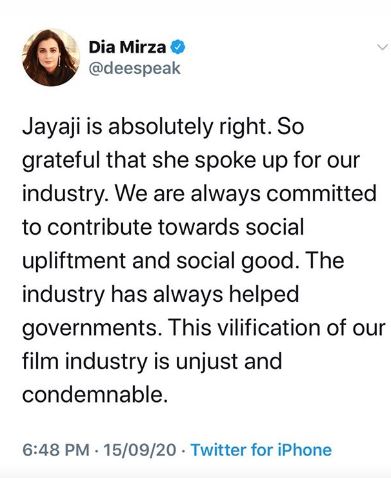 "The industry has always helped governments. This vilification of our film industry is unjust and condemnable," added Mirza.
Genelia Deshmukh took to Twitter to share a video of Bachchan's Rajya Sabha speech shared by filmmaker Anubhav Sinha.
In the video, the lawmaker is seen stating how the government should stand by the entertainment industry when some people are trying to tarnish the industry's image. 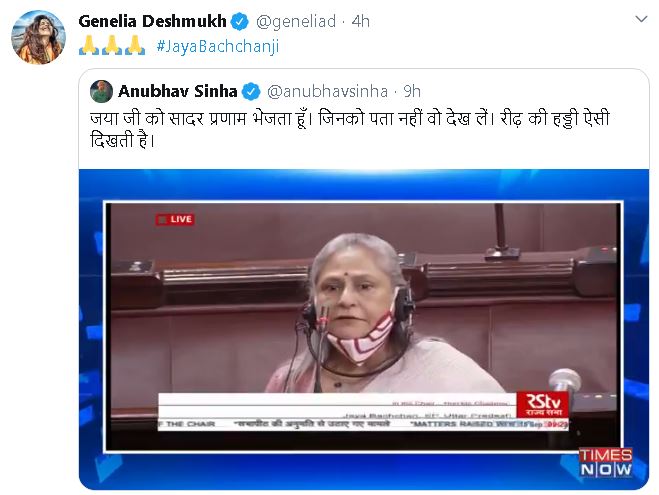 Genelia supported the statement of the lawmaker as she shared the clip and tweeted, "three folded hands emoji with #Jayaji"
Earlier in the day, several Bollywood celebrities including Sonam Kapoor, Taapsee Pannu, Anubhav Sinha, Ankur Tewari supported Bachchan's statement.
Samajwadi Party MP Jaya Bachchan had given a zero hour notice in the Upper House over an alleged conspiracy to defame the film industry. She stated that people working in the entertainment industry are "flogged" by social media. (ANI)