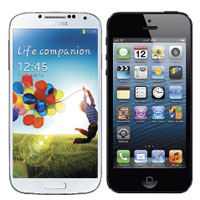 08 November, 2014
Print this article Font size -16+
Samsung Electronics scored a victory over rival Apple in their long-running dispute over mobile device patents after the US International Trade Commission (ITC) issued an order banning older but still popular Apple products from the US market. ITC ruled that Apple had infringed on a patent owned by Samsung that involves the ability of devices to transmit multiple services simultaneously and correctly through 3G wireless technology. It slapped a ban on the import or sale of the iPhone 4, iPhone 3GS, iPad 3G and iPad 2 3G distributed by AT&T, the biggest seller of Apple devices in the US when Samsung filed its complaint in 2011. The products are assembled in Asia. US President Barack Obama has 60 days to review the ruling. If he does not veto the order, it will go into effect.

Back On Track
General Motors rejoins the S&P 500 index, marking a key milestone in the recovery of a firm that needed billions of dollars to stay afloat during the financial crisis. At the same time, American International Group (AIG) also joined the S&P 100 index. The move represents a symbolic victory for GM, which had taken steps to overhaul its operations and return to viability since its near-collapse in 2009. GM will replace H. J. Heinz in the S&P 500 and 100 indices, while AIG will replace Baker Hughes in the S&P 100 index, S&P said.

Cyber Net
Microsoft Corp. (MS) and the Federal Bureau of Investigation, aided by authorities in more than 80 countries, have launched a major assault on one of the world’s biggest cyber crime rings, believed to have stolen more than $500 million from bank accounts over the past 18 months. According to  a Reuters report, MS said its Digital Crimes Unit successfully took down at least 1,000 of around 1,400 malicious computer networks called the Citadel Botnets. Citadel infected about 5 million PCs around the world and, according to MS, was used to steal from dozens of financial institutions, including American Express, Bank of America, Citigroup, etc.

Red Meat
China’s Shuanghui International is buying Smithfield Foods for $4.7 billion to feed a growing Chinese appetite for US pork, but the deal has stirred food safety concerns in the US. These stem from the fact that the firm was forced to recall its Shineway brand meat products from stores two years ago amid fears that some of them contained a banned feed additive. The Smithfield deal will be scritinised by a government panel that assesses national security risks.

Slow And Steady
The pace of the euro zone’s economic contraction slowed quarter-on-quarter in the first three months of this year, according to recent European Union (EU) statistics. The bloc’s statistics office confirmed its earlier estimates that gross domestic product in the 17 countries using the euro fell 0.2 per cent quarter-on-quarter in the January-March period, for a 1.1 per cent year-on-year contraction. That came after a 0.6 per cent decline in euro zone quarterly output in the previous three months. The euro zone remains stuck in recession, despite some signs that the recession is easing a bit, says an economist at Capital Economics.

Top Concern
The International Monetary Fund (IMF) halved its 2013 forecast for German growth, saying that Europe’s largest economy was suffering from uncertainty in the euro zone but would likely strengthen in the second half of the year. In its annual report on the German economy, the IMF said Germany should avoid “overperforming” on fiscal consolidation as economic weakness continued. The Fund expected only a weak rebound given continued subdued business investment. Germany’s economy ministry forecasts growth of 0.5 per cent this year.

Trade Tit For Tat
Responding to the European Union’s move to impose anti-dumping duties on Chinese solar panels, China has launched an anti-dumping and anti-subsidy inquiry into sales of European wine (favoured by China’s growing middle class). This step targets southern European states such as France and Italy that back duties but largely spares countries that oppose them. This is a significant step since China is the biggest importer of Bordeaux wines whose consumption soared 110 per cent in 2011 alone.

Bridging The Divide?
Earlier in June, North Korea proposed official talks with South Korea to normalise commercial projects, including the Kaesong industrial zone that was shut down at the height of tensions between the rivals in early April. North Korea’s state-owned KCNA news agency also said the government would restore severed communications channels if the South accepted the offer of talks, indicating it was prepared to roll back a series of steps it has taken since March that reinforced the deterioration in relations between the two sides. The North also proposed discussing the reopening of tours and family reunions.

Brake Snag
From faulty airbags to faulty brakes. Toyota Motor recalled about 242,000 gas-electric hybrid vehicles worldwide due to a brake design flaw. The automaker is recalling the bestselling Prius and the Lexus HS 250h produced during March-October and June-October 2009, respectively. The recalled vehicles could experience greater stopping distances when braking because of a mechanical design flaw in a brake part. A Toyota spokesperson said the brake pressure accumulator could crack with fatigue and release nitrogen gas into the brake fluid. So far, no accidents, injuries or deaths have been reported as a result of the defect.

New Entrants
The European Union (EU) is expanding to include new members. The most recent is Croatia, which has been accepted after six years of talks. Though, the country may have to go straight into an EU disciplinary procedure when it joins the bloc in July and face an even tougher haul than its ex-Communist peers in adapting to free-market pressures. Croatia will become the EU’s 28th member state. Alongside, Latvia got the go-ahead to adopt the euro from 2014, crowning the Baltic state’s emergence from an economic crisis and signalling to the world that the often-beleaguered euro zone is still expanding.

Generation Shift
Furniture giant Ikea’s 87-year-old founder Ingvar Kamprad has given way to the younger generation. Kamprad, who founded the business 70 years ago and is one of Europe’s wealthiest men, will leave the board of a major company within the business, Inter IKEA Group, which owns the brand and directs strategy. He had already stepped down as CEO in 1986. His youngest son Mathias becomes chairman. Beneath the title changes, a big business with over 300 stores and 690 million visitors is shifting to Mathias and older brothers Jonas and Peter, all in their mid- to late-40s. According to those familiar with the company, Kamprad is being gently eased out of the Swedish firm.