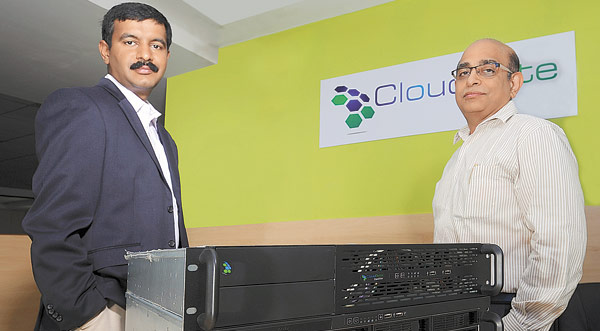 08 November, 2014
Print this article Font size -16+
Technocrats make bad sales people, they say. But if they can meet the challenge of marketing by creating a team, their product is sure to scale up. That is exactly what Srivibhavan Balaram, Felix Xavier and Umasankar Mukkara did when they set up CloudByte in 2010 in Bangalore with their own funds. The three ex-colleagues (from Novell India) felt there was more to cloud technology than just providing it as infrastructure and software. They wanted to go further — don’t simply store; store efficiently.
The software-only company is a vendor for bigger distributors such as Kryptos (in Asia), which sells on behalf of Microsoft, VMWare and Citrix. It helps cloud service providers to virtualise data centres and effectively deliver the platform. Cloud service providers can install CloudByte software on any commodity hardware (server racks), as opposed to buying proprietary (branded) hardware from current players. They can share the storage between multiple applications, which reduces the total storage needed by as much as 50 per cent, and the cost by “80-90 per cent over 3-5 years”.
Say an original equipment manufacturer (OEM), that has its IT infrastructure on a public or private cloud, needs to use a new application. But the new add-on, which has to handle large volumes of data, would eat away a lot of the existing computing power. CloudByte’s software allows the new as well as the older applications to share a common storage platform by making the system change allocation as per demand. “This allows a company to work on a pay-per-data-usage model rather than set up or buy a new server or space in a date centre,” says Balaram, CEO of CloudByte.
“We want to tell the large organisations that they need to look at the wasted space in data centres as a business decision,” says Mukkara, vice-president of engineering, who has filed for nine patents, of which six have been granted.
CloudByte’s software can be used in all large hardware OEMs (IBM, EMC) and data centres. “With older solutions, it’s not possible to share existing storage due to the ‘noisy neighbour’ problem. So, a new application will require new dedicated storage. Scaling up this way is not viable as it will result in hundreds of dedicated storage islands in the data centre. CloudByte cures the ‘noisy neighbour’ problem and delivers performance to each application within the shared storage. This lowers the storage required and the associated capex and opex sharply,” says Balaram. Keeping competition in mind (Amazon Web Services, SolidFire, Nextgenstorage, for example), CloudByte has priced its software low. It did not divulge its rates, but cloud storage costs $140-150 per terabyte. “We hope to be cash-positive by 2015,” says Balaram.
Two years after ideating the business prospects and running pilot projects at a couple of large enterprises, CloudByte is now a 40-member team. Xavier, the San Mateo-based CTO, has been granted a patent for applications recovery from network-induced data corruption.
The entrepreneurs’ vast experience from running development and technology centres for Novell, Business Objects, NetApp and Juniper Networks comes in handy. “We always wanted to do something on our own,” says Balaram. That dream was solidified when Nexus Venture put up $2.1 million in CloudByte in June 2012. The VC fund believed in their pedigree and felt storage-as-a-service was a nascent industry with global potential. “A couple of our investments globally were successful and CloudByte had the right team and product,” says Sandeep Singhal, co-founder of Nexus Venture in India. He says such businesses can grow based on the number of licences sold and also per terabyte of storage used.
Also, the prospect of being bought by a bigger firm at a premium exists. Nexus invested $5.5 million in Cloud.com (VMOps) in 2009. The company was acquired in 2011 by Citrix for over $200 million.

Similarly, along with other VCs, Nexus invested $11 million in Gluster, which provides a platform to scale storage on the cloud. Gluster, too, was bought by RedHat for $136 million. For CloudByte, the timing could not be better as enterprises are going beyond just increasing computing power in machines. Now, it needs to look at building up a reasonable business model to find customers.
CloudByte’s 2,000-sq. ft office in Bangalore is bustling with activity. The company’s base of clients is expanding, both in India and in the US (VMWare and Citrix, to name just two). It is also in the process of adding more IT capability.
CloudByte’s and the distributor’s teams (that sells on behalf of, say, an IBM or a NetApp) together pitch the technology to a client, and based on the requirement, the software is plugged to the virtual machine at the data centre. The client can pay for the amount of space used or subscribe.

“We have vigorously tested our technology and it takes time for a product business to generate cash. But the response gives us the edge to scale up,” says Balaram.
His confidence is not unfounded. A Gartner report says the storage business could be worth $24 billion globally, and is growing at 25 per cent year on year. Public cloud services are simultaneously cannibalising and stimulating demand for external IT service spending. Going by its early-mover advantage, CloudByte is in the reckoning to be top-draw venture in the coming years.