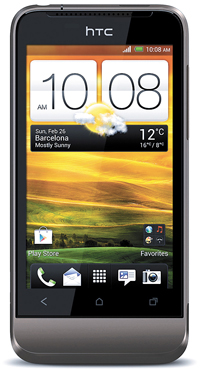 Taking it on the chin
The humble one in HTC’s One lineup, this Android mid-ranger is  distinctive about the way it looks. It has a “chin” that sticks out and people are either neutral about it or find it ridiculous. This is an extra upward tilting extension of the phone’s unibody. And it does nothing in particular, except mark the phone as different looking and perhaps help with the grip. The screen, which is really nice, is a bit raised, giving this otherwise neat phone no rounded edges and even a slight roughness when holding.

The HTC One V is a 3.7-inch phone, dwarfed by its 4.8 inch brother, the HTC One X. But it does have more than one thing in common with it: the very latest version of Ice Cream Sandwich, you can’t get at their batteries, and they both have Bluetooth 4. The chin, when you turn it over, hides the easily openable flap for a SIM (not micro) and SD Card. You’ll need that SD card because there’s barely any storage on this phone: just 4GB, very little of which you can use. It also has a 1 GHz processor which isn’t thought to be adequate to run the software on it and, indeed, there is a bit of a struggle now and then, but it should work fine as long as you don’t push it to the limit. The battery is a 1500 mAh and lasts, though with these phones it all depends on how you use them. There’s nothing humble about the price, which stands at Rs 19,399, though you can get it for a couple of thousand lower if you look. It has a 5 megapixel camera, surprisingly capable for its size and full of settings. There’s also 720p HD video — but no secondary camera. The One V is pitted against the Xperia U which is similarly priced. It’s neck-to-neck between these phones.

All in the family

The Xperia P comes from the NXT clan of Sony smartphones that includes the Xperia S and the Xperia U. They all share a distinctive design, with some nuances.  All three have the same straight lines, set off by a transparent band running around the bottom of the handset. They’re unibody phones and you can’t get to the battery or add much-needed storage. Of course, not many people carry a second battery. But storage is another matter. While you can send data off to the cloud, there are apps that need to be on the device. Be that as it may, all three phones are very nice-looking. The Xperia P has an aluminum back, nice to the touch and adding to a premium feel. However, it also makes one feel that the screen would shatter if the device were to be dropped as there’s nothing to take the shock. The Xperia P is the middle sibling of these three phones, priced at Rs 25,799. Another common factor is that they aren’t shipped with Ice Cream Sandwich. All are to get updates though, and these will change the way the phone works. The Xperia P is closest to the S with a 4.0-inch screen (the S has 4.3). Its screen resolution and density is lower than the S’s and so is its camera, which is an 8 megapixel. It does have a secondary camera. And its processor, a dual core, is closer to its younger brother’s. One thing that’s new on the P is a display technology Sony calls WhiteMagic. This is supposed to increase the brightness of the screen. However, what it also seems to do is make the black less black so that it looks grey, lowering vividity and contrast, which is sad because text elements tend to be quite small on this device.