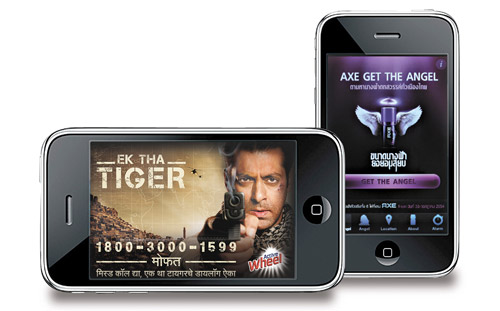 08 November, 2014
Print this article Font size -16+
It has won the battle of the eyeballs. Now, the smallest screen is preparing for a share of the advertising dough. The sheer number of mobile handsets in India — over 900 million connections at last count — should make the fourth screen the hottest target for advertisers. Yet, it has attracted a mere Rs 180 crore in advertising— a fraction of the overall Rs 32,000-crore pie.

But the mobile marketing industry is now preparing for a vertical takeoff. A host of mobile agencies that provide advertising solutions have sprung up in the last couple of years, foreign biggies such as Madhouse are coming in and, finally, the weakest link in the chain — advertisers who were till now unwilling to bet on this channel — are rethinking their strategy.

So far, the going has been rather slow for mobile marketing in India. It has captured just about 10 per cent of the Rs 1,600 crore digital marketing pie. A far cry from countries such as Japan, which, as per eMarketer, is the world’s biggest mobile ad market at $1.36 billion.

But Rohit Dadwal, managing director, MMA, Asia-Pacific, said, “Mobile advertising will soon challenge other channels. By 2012–13, we hope to grow by 40 per cent and touch Rs 250 crore.”

Sudha Shankar, AVP, account management and operations, Ozone Media, an ad network that got into the mobile space a year ago, said, “We may have started a little late, but the tempo is picking up and we are building scale fast.”

Tipping Point
Her optimism may be justified when you look at the expanding industry. Today, there are easily 70–75 mobile marketing solutions firms — companies that can give brand solutions and are different from the players who provide value-added service solutions, or apps-related work. Also, some of Asia’s marquee mobile ad agencies have entered India. Earlier in February, Madhouse, China’s largest mobile solutions and ad network firm, rode into India with a strategic partnership with WPP. In April, Japanese mobile agency D2C tied up with Singapore-based Affle to launch ad2C in India, having acquired MobiMasta, one of the early mobile marketing agencies. Global media network Havas Media’s mobile solutions wing Mobext has also set up shop. Even though none of India’s mobile creatives have made it to the shortlist at the Cannes ad awards show, the work seems to be getting better.

Arthur Policarpio, head of mobile, Asia-Pacific, Mobext, feels the Indian mobile ad action is at a tipping point, citing a recent Mobext survey among advertisers where 55 per cent said they planned to invest in the mobile media in the next 12 months. More significantly, 47.6 per cent felt that in the next two years, the mobile channel would be as important as TV.

Advertisers Take The Call
Companies that were largely sitting on the fence till now are also boarding the mobile bandwagon. Abhiroop Chuckarbutty, media director, Hindustan Unilever (HUL), which recently ran a big mobile campaign, said the firm intends to jack up its mobile ad spends by more than 40 per cent this year.

This year, HUL launched a high-impact mobile campaign in UP and Bihar, to spread awareness about Wheel, its washing soap brand. The campaign was simple: mobile users had to make a missed call to a number. Promptly they would get a call back with a recording of actor Salman Khan’s dialogues from Ek Tha Tiger and his endorsement of Wheel. Chuckarbutty says HUL got 16 million missed calls in four months, and on average the mobile user stayed on the call for 3.5 minutes. The cost per contact — just 27 paise. At the end of the campaign, brand awareness scores for Wheel were up by 25 per cent in the region, and it claims a 300 per cent spike in sales.

HUL’s campaign was a rather simplistic one, but the mobile medium lends itself to some clever concepts. Take the example of AXE Angels mobile campaign in Thailand. Mindshare created an iPhone app where users had to spray the AXE Provoke in the app to download beautiful Axe angels. By collecting more angels, users could unlock special features in the app — for instance, an Angel wake-up call. Also, the angel app led to a live meeting with real angels — beautiful models — at an AXE Expo event. Not surprisingly, the Unilever brand grew by 23 per cent after the campaign.

The Action Stations
Ask mobile marketers where they see the biggest potential, and they feel it will be in location-based and in-app advertising, retail and couponing. “The mobile is not just a media, but a store in itself,” says Policarpio, describing how banks have leveraged this, making the device work like a branch. He also cites an interactive app that Mobext developed for Domino’s in the UK, which allows customers to create their own pizza, and play games to unlock hidden vouchers. This app resulted in a hike in orders, with a-fifth of all online sales coming from mobiles.

Couponing, or discount coupons on the mobile platform, is another hot opportunity for mobile marketers. Chuckarbutty described how HUL had experimented in this space with washing powder Surf and managed a 25 per cent redemption rate on coupons. “We’re going to chase mobile couponing like a mad bull,” he says.

All this sounds very heady, no doubt. But there’s still miles to go before India can catch up with mobile-mature markets such as Japan. After all, as Mindshare’s Srivastava points out, 79 per cent of India’s top advertisers are not even geared with a website compatible with the mobile platform.