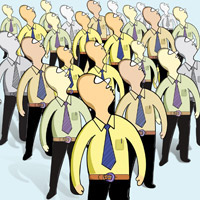 08 November, 2014
Print this article Font size -16+
Green shoots might be budding in the Indian economy, signaling optimism, but the job market remains depressed.

Hiring sentiment till March 2013 across India Inc. is rather weak, according to a new survey by online job search and hiring portal Headhonchos.com.

The report is based on a survey of talent acquisition teams from 92 organisations cutting across various sectors as well as 2286 senior professionals. The survey was conducted between August and September 2012 to assess the projected hiring till March 2013. It focused on incremental corporate hiring after “backfilling for attrition” or in other words replacing talent lost due to attrition. Incremental hiring, says the survey, is a pointer to economic growth.

According to the report, even as 51 per cent employers indicated they would add more people by March 2013, after backfilling for attrition, this was nullified by the remaining 49 per cent employers talking of freezing hiring or even downsizing. Interestingly, only 11 per cent of senior professionals surveyed expected downsizing in their organisation as a consequence of slower growth compared to 26 per cent of employers.

Speaking about the findings, Uday Sodhi, CEO, HeadHonchos.com said, “Weaker hiring plans for mid-management and senior positions signal a cautious approach amongst corporates, especially when supported by the opinion of professionals.”

The silver lining in the  subdued hiring pattern came from the IT and ITES industry which projected a 56 per cent increase in headcount. Also, an optimistic 66 per cent of IT employers expect an improvement in market conditions beyond March 2013 as compared to a 58 per cent of overall employers. This optimistic sentiment is mirrored by senior professionals from the Pharma and FMCG industries who too expressed strong confidence in their industries, with as much as 96 per cent Pharma professionals expecting a positive industry growth.  Meanwhile, telecom, media and entertainment, BFSI and real estate employers expressed negative hiring sentiments.

As compared to the larger metros, professionals in the smaller towns are more optimistic on industry hiring and growth rates. Fifty-eight per cent of respondents in the Tier 2 & Tier 3 cities expect active hiring as compared to 51 per cent across India and 49 per cent in Mumbai, Delhi and Bengaluru. This could be attributed to higher degree of insulation from corporate offices which are more likely to be located in the metros.

Commenting on this development, Sodhi said, “An interesting development as we ride out the economic cycle, is a proactive approach by corporates and senior professionals to effectively counter the environment.”