New Delhi [India], December 21 (ANI): Northwest India is likely to experience relief from the severe cold conditions soon as the India Meteorological Department (IMD) predicted a gradual rise in minimum and maximum temperatures by two to three degrees Celsius over plains of Northwest and adjoining Central India including Delhi during the next 48 hours.
According to IMD, 7.2 degrees Celsius temperature was recorded in Safdarjung, Delhi at 5:30 am today.
"Gradual rise in minimum and maximum temperatures by 2-3 degree Celsius very likely over plains of Northwest and adjoining Central India. No Cold Day conditions likely to prevail over Northwest and adjoining Central India during the next two days except East Uttar Pradesh," IMD stated in its bulletin today.
However, current spell of cold wave/severe cold wave conditions over Northwest and adjoining Central India is likely to abate from 21st December.
The current spell of cold wave/cold say conditions and dense to very dense fog is likely to continue at a few places over East Uttar Pradesh on 21st December and at isolated places over the same area during subsequent two days.
"Current spell of cold wave/severe cold wave conditions are likely to continue over Bihar, Gangetic West Bengal and interior Odisha during next two days," said IMD.
Meanwhile, people are yet to get relief from the cold wave conditions in Uttar Pradesh's Kanpur where tempertature is witnessing a dip.
Fog and cold has also disrupted normal life in Moradabad while the city is witnessing a rise in pollution levels for the past three days, making it more difficult for the locals to carry out their routine chores.
According to the Central Pollution Control Board's data, Moradabad has recorded and AQI (Air Quality Index) of over 320 for the past two days. Meanwhile, Lucknow is also witnessing dense fog nowadays while the temperature here continues to decrease.
According to the Uttar Pradesh Meteorological Department people are unlikely to get relief from the chilling cold for at least next 10 days.
While cold wave conditions continue to grip various parts of Uttar Pradesh, devotees in Varanasi continue to take a dip in River Ganga amid dense fog and dip in temperatures, in the wee hours everyday.
Apart from Uttar Pradesh, dense fog engulfed Bihar's Muzzafarpur district this morning. 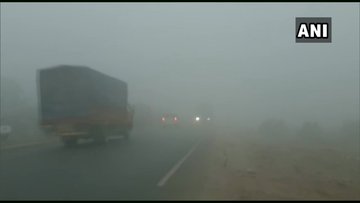 "Earlier administration used to arrange bonfires during such cold weather. Now, they no longer make such arrangements, leaving us shivering in such harsh weather," said a local.
IMD has predicted dense to very dense fog very likely in isolated pockets over Uttar Pradesh and dense fog over Assam and Meghalaya and Tripura and Mizoram for the next five days. (ANI)