Sky Is The Limit 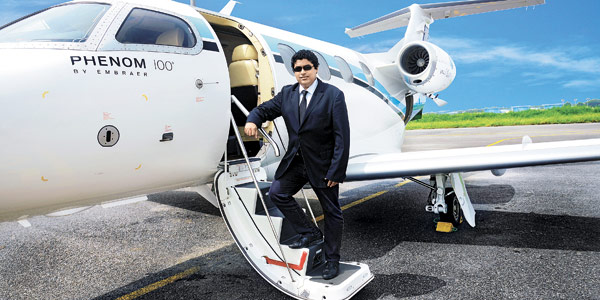 08 November, 2014
Print this article Font size -16+
In his picture-book narrative, Lie: A Traditional Tale of Modern India, architect, critic and satirist Gautam Bhatia writes about a minister who travels in “a chartered Boeing 747 retrofitted with a bar, a fridge, a TV, a microwave, a jacuzzi, a pool, a squash court, a small restaurant, a golf course and an AC shopping arcade…”

The satirical book may have exaggerated the offerings in a private jet but those in the business aren’t stumped at some of the outlandish demands made by owners of such jets.

That said, the economic downturn is a harsh reality for the sector and analysts are pointing out the warning signals, many going to the extent of saying that such flights of fancy may have to wait in the wings for the next 12-18 months.

According to a recent report by Ascend Advisory, an aviation consultancy firm headquartered in the UK, sales of aircraft across the globe have been hit by the economic downturn. In 2012, business jets saw a ‘low year’ with just 675 deliveries, virtually flat compared to 2011 and only half the number of deliveries five years ago. Also, while North America and Europe remain the two key markets for business jets, their share of deliveries has fallen from almost 90 per cent 10 years ago to just 70 per cent in 2012. The forecast is that growth will come from emerging markets like Latin America and Asia-Pacific, which accounted for 30 per cent of the deliveries last year.

India, according to KPMG, has more than 165 business jets, up from 23 in 2005. Amber Dubey, partner and head , aerospace and defence, KPMG India, says the country has the Asia-Pacific region’s second-largest business jet fleet after China. In India, business jets have grown at a CAGR of 32.5 per cent between 2005 and 2012. Between 2011 and 2012, however, the growth has been barely 7 per cent. “In 2013,” adds Dubey, “the industry expects to add another five to seven business jets”.
He, however, agrees that the downturn has hit the sector adversely, with the demand for business jets expected to remain sluggish in the next 12-18 months due to the “huge rupee depreciation, corporate austerity measures, rising airport charges, high fuel prices, taxes and complex procedures”, besides what Dubey calls “the lack of a suitable government policy framework”. The business could crashland, prompting some companies to cancel orders and, in a worst case scenario, even sell their business.

Take Invision Air, a Mumbai-based company in the business of exclusive private jet charters. Five years ago, the company placed an order of 20 aircraft for a staggering $85 million, but given the economic slump, it couldn’t raise the money and had to cancel the deal. This prompted Invision Air to overhaul its business. Says Vinit Pathak, managing director of the company: “An economic downturn does not mean that the demand for business jets is over. It doesn’t mean the honcho will go back to business class travel in commercial airlines. It only means that some amount of restructuring has to be effected by companies like ours.”

Invision Air now has two Embraers and works on a shared-ownership-revenue model with many owners of business jets. A win-win situation as the cost comes down for both the owner and the charter company.

In Pathak’s view, the downturn has also given a fillip to private aircraft ‘chartering’ because many prefer to charter planes for business meetings. In the past year, Invision Air has seen 100 per cent growth thanks to the trend of chartering planes catching on.

Increasingly, the global economic slump, falling rupee, and rising costs are forcing prospective business jet buyers to opt for pre-owned jets. Analysts explain the trend: Of the roughly 20,000 private jets worldwide, 10 per cent come to the pre-owned market. During peak recession, this inventory rose to nearly 16 per cent.

This could explain the recent entry of the US company Nextant in the Indian aviation market. Nextant, which specialises in business jet ‘remanufacturing’, is confident of a steady revenue stream here. What it does is replace, restore and carry out the proverbial spit-and-polish of old jets to turn them into near new flying machines. So, worn out engines, instruments and safety equipment are restored and replaced by the company. However, Nextant is thus far only working on one brand of jets — the Hawker Beechjet 400A/XP.
break-page-break
Re-manufacturing jets makes sense as the cost involved is roughly half that of a new airplane.

Another trend seen in this space is that of charter services sprucing up their jets to cater to clients in emerging markets. Says Adnan Kazim,  divisional senior vice-president, planning, aeropolitical and industry affairs, Emirates Executive, a business jet charter service: “We have seen an increasing demand in the private jet travel segment, especially in the Middle East, Europe, India, Russia and China. We are looking to tap this niche market with the high quality of service and attention to detail associated with Emirates.”  Its newly configured aircraft, which can seat up to 19 passengers, have private suites, a large multi-functional lounge area, fine dining options, special rest zones with plush seating, television screens, showers, video-conferencing facilities, Internet and mobile phone connectivity.

According to research by ExecuJet Aviation Group, a global business aviation organisation, the demand for pre-owned business aircraft is led by the Middle East, India and China. Growth is in the region of 15-20 per cent year on year. Besides costing less, even the time to acquire a pre-owned jet, compared to a brand new one, is less (it takes two years or get delivery of a brand new jet, say experts).

Rajesh Ranjan, associate vice-president, southern region, Air Works India Engineering, says the excitement is just about building up, what with the company showcasing its strength in bespoke luxury. These include gold-plating of seats, gallery areas and faucets, creating customised logos, refurbishing carpets, tapestry and upholstery, buffing and polishing — besides replacing — wood veneer panels.

In the past year, ever since Air Works opened its 13,000 sq. ft workshop-cum-studio in Mumbai for dedicated bespoke services in business aviation and “tip to tail solutions”, the company has already refurbished close to 10 business jets. Explains Ranjan: “The downturn doesn’t mean that people stop buying aircraft. It means there’s a shift, from buying a brand new business jet to getting pre-owned aircraft.” In his view, the luxe consumer doesn’t want to compromise on the aesthetics of the plane’s interiors. “So, even as the overall industry is in a slump, refurbishing of private aircraft hasn’t nosedived,” he says.
Typically, pre-owned aircraft are anywhere between three and five years old and those who invest are people who clock 300 hours of air travel annually. “Owners are investing crores in refurbishing the aircraft because they are saving crores on purchase cost,” points out Ranjan. To be sure, compared to the price of a new aircraft (anywhere between $5 million and $80 million), a pre-owned aircraft costs, on average, 30-40 per cent less.

Such is the draw that many others are lining up offerings too. At the recently concluded Business Jets Interiors International Expo 2013 in London, where the likes of Versace and IPE Cavalli’s Visionnaire participated, one company showcased a prototype of a casino lounge, complete with a blackjack table, bar counter and a touchscreen facility to order food and drinks.

In keeping with the bespoke trend, IPE Cavalli’s Visionnaire rolled out offerings for those who seek 100 per cent customisation. For instance, the 12-seater Dornier 328 VBJ has hallmark detailing of the brand in its seats, doors, bathrooms and even the fuselage, all of which bear the Visionnaire logo.

“Owners go all out on refurbishing their interiors,” explains Ranjan of Air Works. This could mean anything from a faux crocodile leather trim running throughout the aircraft to 22 carat gold-plated bathroom fixtures, handwoven, customised carpeting, and carefully selected artwork. As mentioned earlier, owners of business jets are typically business tycoons who pack in anywhere between 200 and 300 hours of air time in a year for both business and leisure.

Call it winged luxury or your private suite in the air, those who are in the business of flying say that more than anything else, it’s the time saved (standing in queues and depending on commercial aviation) that is the real luxury in flying on private jets.

So, even as business jets come fitted with modern luxury offerings, styling, fancy interiors, private suites, high-end telecommunication facilities, entertainment cabins with gaming consoles, specialised galleys with lightweight microwaves, coffee machines, wine coolers, etc., it is the ease of doing business in the air that is fuelling the demand for such a travel option.

The downturn may be a dampener but who says captains of luxury are in any mood to compromise?