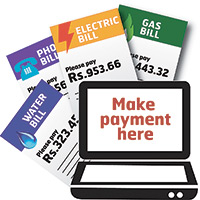 08 November, 2014
Print this article Font size -16+
The Reserve Bank of India (RBI) is taking great pains to kill cash. Maybe not that dramatically, but at least when it comes to bill payments of credit cards, cable TV, electricity, etc. Much to the convenience of the common man, RBI is setting up a Bharat Bill Payment System (BBPS). Simply put, BBPS will be a centralised bill payment system with the participation of various stakeholders — billers, aggregators, banks and other non-banks, thereby providing an ‘anytime anywhere’ single-brand payment point irrespective of the billers’ location. This can also be extended to include school fees, taxes, insurance premiums, etc. There will still be a physical element to bill payment since much of India isn’t ‘wired’ as yet. All great, thus far, but the question that arises is — how long will RBI take to implement it? Mint Road’s report says 9-12 months, industries say at least a couple of years. Trouble already?

Need To Take A Hard Line
It’s time the Centre held corporates responsible for squatting on national resources. In the case of the KG-D6 basin operated by Reliance Industries (RIL), the firm failed to develop three of its gas discoveries — worth $1.45 billion at current market prices — since their allotment in 2002. According to the contract, RIL should have begun development work by 2012, but it didn’t. While the Directorate General of Hydrocarbons says the fields should be re-auctioned, the petroleum ministry wants to relax the norms, arguing that RIL may go for arbitration — leading to further delay. It may be time to send a stern message to India Inc against licence squatting. Hopefully, the courts will see through the delaying tactics too.

Rules Are Meant To Be Broken
The election code of conduct seems to be akin to the constant nagging of your GP. Heard but not heeded. Why else would they be flouted so blatantly, and repeatedly, without a care. It’s hard to believe that BJP’s Narendra Modi was unaware that the party symbol can’t be flaunted outside a polling booth, or that TDP’s Chandrababu Naidu didn’t know better than to come out and announce who he had voted for. Punjab CM Parkash Singh Badal was photographed standing in the poll booth as his granddaughter voted, and so was Congress’s heir apparent Rahul Gandhi, who ‘oversaw’ voters casting their vote. So, what is it that prompts politicians to think they can get away with their impudence? Is it the same instinct that causes them to flout rules after they come
to power?

Riding The Indian Market Rally
Foreign portfolio investors — especially sovereign wealth funds (SWF) — seem to be more bullish about Indian shares than their peers back home. While domestic investors have slowed their pace of deploying fresh funds, SWFs are shovelling in funds to the Indian equities market like never before.

Assets under management of SWFs have grown from a monthly average of Rs 55,000 crore in 2012 to around Rs 1.11 lakh crore in December 2013, according to the records of market regulator Securities and Exchange Board of India.

Now, this is good news as SWFs, by nature, are long-term investors. On average, they look at 15-20 per cent returns over 3-5 years. The renewed interest of SWFs in Indian shares hints at a rally around the corner. With Indian retail investors playing cautious and waiting for election results on 16 May before pumping their money into the bourses, SWFs seem to have a finger on the market pulse that we don’t.

Working Like There’s No Tomorrow
While India watches the explosive 2014 general elections unfold with bated breath, the Central Bureau of Investigation (CBI) is doing its job like there is no tomorrow. By end-April, it had closed six of the eight cases in the coal scam, and also investigated — and cleared — 225 firms with respect to securing coal blocks. Its probes against top corporates such as the Jindal group and Hindalco are expected to be completed before the election results. In the 2G scam, the agency withdrew from filing a charge-sheet against former telecom minister Dayanidhi Maran in the Aircel-Maxis deal, while the Enforcement Directorate charged DMK chief M. Karunanidhi’s daughter Kanimozhi, wife Dayalu Ammal and party MP A. Raja under the Prevention of Money Laundering Act. In the Adarsh scam, CBI charged Indian diplomat Devyani Khobragade and her father. While some have accused CBI of being too hasty and careless, others say it’s finally enjoying the ‘freedom’ to do its job!

Ringing In Better Times For The Telecom Sector
The telecom industry finally seems to be turning around. As results for FY14 were announced, Idea Cellular’s profits rose a whopping 77.9 per cent to Rs 1,793.2 crore, Reliance Communications 56 per cent to Rs 1,047.7 crore, and Bharti Airtel 21.8 per cent to Rs 2,772.7 crore. These firms have all seen increase in revenues and earnings before interest, taxes, depreciation and amortisation (ebitda) as well. This surge can be attributed to two reasons. First, competition in the industry has reduced substantially, which has ensured that existing telcos get larger shares of new additions. Second, over the past year, free minutes offered to subscribers have also been gradually reduced. This could just be the stage being set before operators increase headline tariffs. That’s primarily because operators that have paid over Rs 61,000 crore for spectrum in the recent auctions want to monetise their investment. The only area that has seen some decline is data tariffs.

No Longer An Untouchable
Sting operations have been stripped of their halo. From the 2001 Tehelka heyday, they are now often scams themselves — one video that was later proved to be doctored may have even cost a candidate an assembly seat in the 2013 Delhi elections. The Supreme Court (SC) recently refused to insulate sting operators from prosecution, saying the deceptive means employed raises moral and legal questions. The News Broadcasters Association rules say stings should be used only as a last resort. On balance, the SC did not ban stings, but by withdrawing protection it has, perhaps, put an end to ‘motivated’ stings.

Maintaining Alliances
Air India finally joining Star Alliance can be viewed as good news for India and its flagship carrier — if, and that’s a big if, the airline is able to deliver a quality of service akin to other alliance partners such as Singapore Airlines and Lufthansa. Star Alliance is clearly the best of the three large world alliances (OneWorld and SkyTeam being the others), especially since it has the largest share of international traffic to and from India. But the national airline may well find keeping up with the alliance a tough act to follow as it is yet to set its own house in order. While Air India’s on-time performance has clearly improved, one cannot help but recall the days of 14- and even 24-hour delays on several Air India flights. What worsened the situation was the poor handling of passengers by indifferent Air India staffers. In fact, one of the biggest problems that ails the carrier is the attitude of a divided and disgruntled staff. How does one provide world-class service with employees who are severely de-motivated or even hostile? ­
— Anjuli Bhargava

An Exploding Case Of Mangoes
Bans on Indian exports and protests thereafter seem to have become a routine affair for Indian traders. The latest is the temporary ban by the European Union (EU) on Alphonso mangoes and a few other vegetables, which is costing retailers in the euro zone and Indian exporters millions of dollars. Given that this follows warnings way back in 2010, and the presence of fruit flies in 207 consignments of fruits and vegetables last year, India had enough time to get its act together. It’s clear that India’s nonchalance towards enforcing safety standards won’t pass muster with respect to the EU. India would be well served if, instead of protesting, it followed the stipulated guidelines across products. This would help avoid further bans that seem to be in the offing.

Slapping Fines, But No Recovery
It’s time Indian regulators had the teeth to enforce penalties. Take the case of the National Pharmaceutical Pricing Authority (NPPA). The drug price controller recently slapped a fresh penalty (in addition to the 16 existing cases) of Rs 105 crore on Cipla for selling two drugs above the prices fixed by the regulator. This is in addition to the 89 cases in 2013-14 against various drug makers for overcharging. The penalties against them add up to around Rs 380 crore. Of this, it has recovered only Rs 40 crore. The reason is that most cases keep getting stuck in courts. The government should either fast-track the court cases or empower agencies such as NPPA with the tools to punish erring firms.