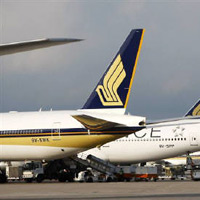 08 November, 2014
Print this article Font size -16+
Singapore Airlines Ltd's Indian joint venture is looking to start flights from 1 September, according to its application to the sector regulator for permission to operate.

TATA SIA Airlines Ltd, 49 per cent-owned by the Singapore carrier and 51 per cent held by Tata Group, plans to operate 87 flights a week during its first year of operation, it said in the application. The airline plans to nearly double that number during its second year.

The carrier said it is taking Airbus A320-200 and A320-200 neo planes on lease, without disclosing how many will be in the fleet, and will be based in Delhi. It may add other bases in India in later years depending on the rate of fleet growth, it said.

TATA SIA initially plans to operate domestic flights, but will eventually expand to international full-service flights, it said in the application. India is in the process of scrapping a rule that does not allow carriers with less than five years of operations and 20 aircraft to operate international flights.

The Indian aviation regulator, which this week gave a flying permit to a low-cost airline joint venture of AirAsia and Tata Group, has sought comments from the public on TATA SIA Airlines' application for a permit.