Mumbai (Maharashtra) [India], January 23 (ANI): US Senator Bernie Sanders has taken social media by storm with his look at the US presidential inauguration ceremony, which has triggered a hilarious meme fest.
Taking a cue from several celebrities, who have been sharing Sanders memes on their Instagram stories, the 'Gully Boy' actor Siddhant Chaturvedi shared his own version of the meme. The actor shared a fun mirror selfie of him on Instagram on Saturday, which also features the US Senator.
In the picture, the 27-year-old actor can be seen sporting a mustard-coloured shirt with a DSLR in hand. He captioned the post as, "It's no poetry till you're found." The actor can be seen posing in front of a mirror while clicking the photo, and Sanders can be seen sitting in the cupboard behind him. 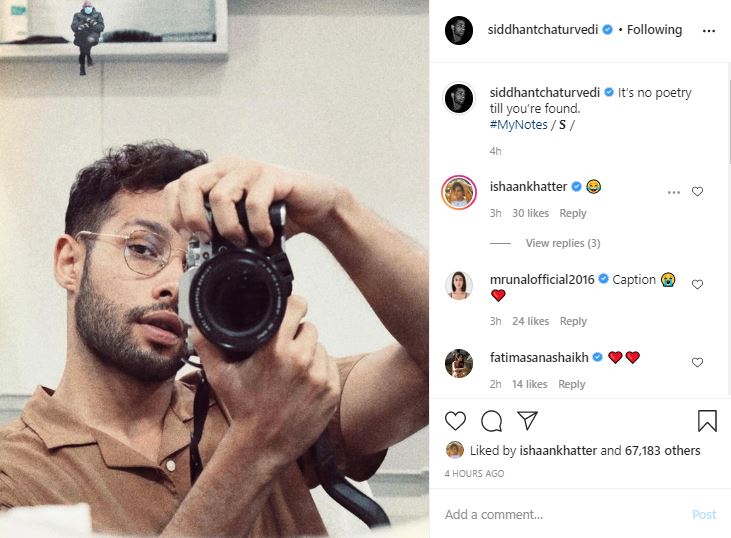 Since being shared on the photo-sharing application, the post has garnered more than sixty-seven thousand likes. For the unversed, at the US presidential inauguration, Sanders arrived wearing a heavy winter jacket and patterned mittens, triggering a meme fest on the social media.
A picture featuring Sanders sitting cross-legged on a chair in his cozy and comfortable outfit among the guests, who were dressed to the nines, has now taken over the internet. Not only netizens but many celebrities have also shared their photoshopped pictures with the US Senator.
Meanwhile, on the work front, Siddhant will be next seen in the horror-comedy 'Phone Bhoot' along with Katrina Kaif and Ishaan Khatter. The actor will also be seen in 'Bunty Aur Babli 2' with Saif Ali Khan and Rani Mukerji. He also has an untitled Shakun Batra film in the pipeline, co-starring Deepika Padukone. (ANI)