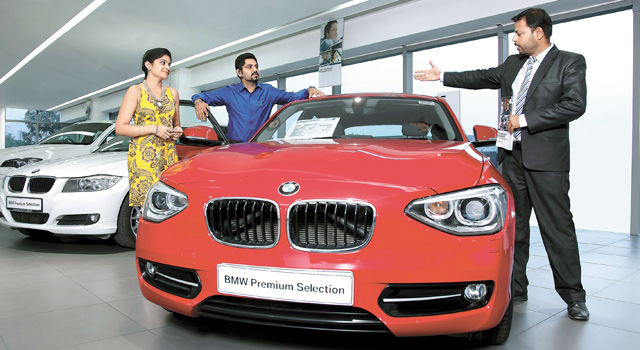 02 December, 2014
Print this article Font size -16+
For his 35th birthday, Shagan Kumar, a consultant with a multinational company, decided to gift himself a new set of wheels. He had been driving a Toyota Altis for three years and wanted to upgrade to a luxury car. The BMW 3-series was his car of choice but at Rs 34 lakh, a little out of his budget. However, he decided to visit a dealer and test-drive it anyway. It was while he was at the dealer’s that he realised he could have his dream car at nearly half the cost. The catch: it was part of BMW’s Premium Selection, the company’s pre-owned car programme. The three-year-old, black beauty had clocked 23,000 km and was available for Rs 18 lakh. “I drove it and it felt like a new car. Plus it came with a two-year warranty,” says Kumar, who has been whizzing around in the ‘Beamer’ since April.

Kumar is part of a growing tribe of young consumers who aspire to drive a luxury car but haven’t yet acquired the financial status required to own one. It is this market that the big daddys of luxury — BMW, Mercedes Benz and Audi — are hoping to tap with their respective pre-owned car programmes. While Mercedes and BMW have been in the business since 2010 and 2011, respectively,  Audi entered the market in April.

New Customer Base
The pre-owned, or as some call it, the ‘pre-loved’ car market allows luxury car companies to attract a new set of customers. “We are increasingly seeing a new segment of younger buyers in the pre-owned luxury car segment,” says Joe King, head of Audi India. “These include young professionals and executives, first-generation entrepreneurs, etc. Over the past few months, there has also been an increase in salaried customers visiting us. They look forward to treating themselves to a nice luxury car. These customers form a completely new segment and that’s where we also see growth in the market,” he explains.

A pre-owned programme also ensures brand loyalty and future business. “Premium Selection will bring more potential long-term customers to the BMW world,” says  Philipp von Sahr, president, BMW Group India. “We hope that once a customer has driven a BMW, albeit a pre-owned one, he will move to a new one, once his pockets are deeper.” This also warrants more business for dealers. Of the 15 BMW dealers in India, 11 offer pre-owned cars as well. “The dealer needs to maintain that relationship with the buyer so that a few years down the line, when he is planning to upgrade, he takes his business to the same dealer,” explains Von Sahr. In future, he expects all dealers to provide Premium Selection vehicles. However, he foresees a space constraint. “Dealers will need to invest in larger spaces as, unlike a new car showroom where displaying a few cars is enough, under Premium Selection, they will need to display all the cars in their inventory.”

Over the next five years Audi plans to have dedicated dealers for Audi Approved Plus — its pre-owned car programme — in the National Capital Region, Ahmedabad, Bangalore, Chennai and Kolkata. It is also looking at expanding in markets where it sees potential. “There is a big demand for new and Audi Approved Plus cars in tier-II and -III cities too,” says King.

While earlier the pre-owned car business was dominated by grey market dealers and online sellers, the entry of the companies themselves has ensured quality control. Von Sahr says it also helps maintain brand image. “When pre-owned cars are left in the hands of grey market dealers, the brand suffers as there is no quality control. When we control the sale and purchase of pre-owned BMWs, we can do a quality check. For instance, no car that we sell is more than five years old or has run more than 1,20,000 km.” Each BMW Premium Selection vehicle also undergoes 72 checks before being certified.

Similarly, all the vehicles being sold under Audi Approved Plus are checked for 110 criteria before they are certified. “The fact that the vehicles are technically conditioned to Audi standards, thus ‘free of defects’, is one of the major factors contributing to growth,” says King.

Symbiotic Relationship
The growth of the pre-owned luxury car market bears a direct relation to the growth of the new car market. As more people buy new luxury cars, more cars come into the market for second sales. “There’s a trend of customers’ ownership periods increasingly getting reduced over the years,” says Kern. “Currently, the replacement cycle is at two to four years for cars, compared to three to five years earlier.” Adds Vinay Sanghi, founder and CEO of cartrade.com, a networking platform of over 1,200 used car dealers: “Most high-end users don’t use a car for more than three to three and a half years. They change their cars much faster as they have the money and want to upgrade to the next level. Comparatively, middle-class users keep a car for five to six years.”

High depreciation — as much as 30 per cent in six months — also makes it attractive for customers to go for a pre-owned car. Explains Narjeet Gill, manager, Premium Selection, Bird Automotive, a BMW dealer: “Most luxury cars are owned by businessmen and self-employed people who claim depreciation on their books. It makes sense for them to upgrade every three-four years.”

Luxury car manufacturers are certain there is no fear of cannibalisation. “There is enough untapped potential for both the new and the pre-owned car segments to grow,” says Von Sahr. Adds Sanghi of cartrade.com: “In India, we only have 18 cars for a thousand people, so there is enough scope for growth of all segments.”

Be prepared to see a lot more people driving around in luxury as the pre-owned car market makes it simpler for them to get behind the wheels of their favourite car.