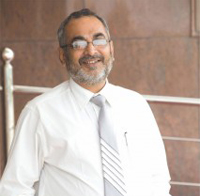 08 November, 2014
Print this article Font size -16+
When Gautam Sinha was appointed as the director of IIM Kashipur in May this year he inherited a fair share of challenges and responsibilities. A make-shift campus situated within an idyllic but relatively ill connected town in Uttarakhand, undergoing teething troubles— from faculty recruitment to establishing academic infrastructure — where the “show was being run” by mentor institute IIM Lucknow. Sinha believes the functioning of IIM Kashipur is akin to running a startup: there are no fixed working hours and there is always a lot to be done. Yet it is a startup that needs to live up to the reputation of a Fortune 500 company in this business allegory. Starting from scratch is always tough; it gets tougher when a formidable reputation as the benchmark in business education precedes your existence.

Among the newest of the new IIMs proposed in 2009, IIM Kashipur commenced operation from July 2011 and is the thirteenth IIM to be set up in the country. Even as all the IIMs are “same yet different,” autonomous yet united, the categorisation between the new IIMs and the old hasn’t and isn’t likely to be dissolved yet. The six new IIMs are, however, allied in their ideological standpoints and bound in pragmatic solutions. One of the strategic decisions has been to jointly conduct interviews for the 2013 batches of PGP aspirants for all six institutes. “We don’t have the vast resources; the fairly high amount of faculty involvement required in the selection process and none of us has the wherewithal, so it makes sense to pool, aggregate and conduct the (admission) process together. It saves us the time, effort and maybe if left to ourselves, we won’t be able to handle it,” Sinha reasons.

When it comes to drawing up admission criteria, ensuring diversity is certainly part of the design, although, overdoing diversity could result in a whiplash of some other kind, says Gautam Sinha who believes that even this non-diversity (the overwhelming majority of engineers) within business schools in India today is rooted deeply within the larger socio-cultural context that exists. “We can’t run away from the realities of the education scene in India. Unless one is very convinced at the age of 12, 13 or 14 about what one wants to be, everybody wants to be an engineer”, he says while describing how mothers in upper middle class houses across India’s are acutely aware of the sectional cut offs in IITs while fathers draw up extensive excel sheets to compare and contrast the different branches in various IITs their son or daughter should analyse. The ‘holy grail’ of middle class India’s aspiration, all pervasive he calls it. “Changing the admission process will not necessarily change the world outside”, Sinha claims even as he passionately asserts that one willing to change careers can always do so provided (s)he has the talent and zeal for it. Case in point, Sinha left his successful career in the steel and engineering industry to teach In IIT Kharagpur’s Vinod Gupta School Of Management  and then moved on to become the director of The Lal Bahadur Shastri Institute of Management in  New Delhi before his stint in IImM Kashipur began.

Then there is the issue of gender diversity. It made headlines when the 2010 batch of IIM Kozhikode’s PGP programme comprised 30 per cent female students. “Ideally I would like 50 per cent girls in the institute but in order to achieve that I will need to tweak the admission criteria in a manner that would deny many others who deserve to be admitted to the program,” Sinha explains as he goes on to talk about how there are a number of industries where hardworking, sincere women may not want to work. “Would a girl like to go work in a coal mine or a steel plant?” he asks. It seems like a rational question considering there are very few women who opt for such a career. It will still take a few years before that kind of parity becomes a reality, he opines.

Opening doors to more students to be a part of the IIM family may be changing the intra-personal dynamic between the premier business schools, but one thing it isn’t resulting in is the loss of exclusivity or brand dilution: Sinha is beyond confident and shirks of opposition to the idea with force and fact.

“Around 2 lakh people apply for CAT every year, out of which we select 2,000 which is 1 in 100. When it comes to selectivity, there may be 5 students who fall within the 99.99 percentile rank; when you move to the 99.98 would be 200 and by the time you reach 99.7 the number would have risen to 5,000. If I start counting from the top and stop at 2,000, I will have to do so because of the lack of seats. No matter which process of shortlisting we employ —alphabetical, random selection based on registration numbers or date of birth—there will always be so many people in that percentile rank whom we will not selecting,” Sinha states as he explains the predicament of the number game in the admission process. Therefore it is more than welcome to induct more students from a qualifying percentile ranks in the IIMs and by extension other business schools as well. As for exclusivity being compromised, “ the Chinese president came to India to look at the IITs and said there should be hundred IITs in China,” is his taut response to the subject.

Learning From Geography
Gautam Sinha expresses how every (physical) location comes with its set of pluses and minuses: it is matter of attitude and innovation that can turn the tide when it comes to terrain.  Having lived and taught in IIT Kharagpur  for over nine years, he informs how because of its peculiar location as a small town with virtually no social life, it provided students the fillip to spend their time more  by engaging in activities as varied from water polo to English drama. “This may not have been the case if a PVR  was located nearby perhaps,” he quips.  In the case of IIM Kashipur, it is located about 250 kilometres from Delhi but reaching the place isn’t very easy. What makes Sinha optimistic is that fact that “ there are about 50 large industries in a 50-kilometer radius around the campus: from Tata Motors , Mahindra and Mahindra, Bajaj Auto, ITC , Britannia among others.”  This creates huge scope for industry interaction as well as students’ involvement in understanding local businesses, which is a mutually beneficial process.

The integration of local business and culture into designing new courses and centres is something which has led IIM Udaipur, for instance, to set up a centre for tourism and in IIM Kashipur, Sinha feels the setting up of a centre for sustainable development, which takes into account environmental concerns as well as manufacturing (given the  host of industries). The possibility of eco tourism also emerges thereon given the lush greenery that is characteristic of the state. “Just because we are IIMs we can’t be situated in our ivory tower; we have to find a way to give back as well,” Sinha maintains.

Problems of perception, however, plague IIM Kashipur to some extent. “When it comes to (IIM) Rohtak vis-a- vis Kashipur, the former can be reached in 2-and-a-half hours from Delhi and it takes about 4-5 hours to reach the latter. Yet for a visiting faculty from Mumbai, Rohtak is still Delhi but Kashipur is far away,” Sinha informs. These are some real problems that can’t be intellectualised to a great extent. Yet, well in the way of recruiting new faculty and hopeful to admit a batch of about 70 students this year (the current batch size is 40), Gautam Sinha is well on the way to make IIM Kashipur a name of its own.
Tags assigned to this article:
exclusive to web alokita datta new iims web exclusive profiles b-school 6 iim kashipur gautam sinha iit kharagpur