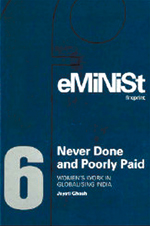 Liberalisation is becoming a bad word in India. In Never Done And Poorly Paid; Women's Work In Globalising India (Women Unlimited), Jayati Ghosh examines the complexities of liberalisation and its underlying paradoxes from the perspective of women workers. She traces India's rapid economic growth since the beginning of the 1990s to infer that the growth has not resulted in a meaningful growth in jobs. While India's growth is being lauded worldwide, ground realities are different for workers who, despite contributing to the growth, are left out in the cold. The workers, especially the women, have not been able to enjoy the fruits of this growth.

There are capitalist rights in place, argues Ghosh, without any safeguards for the financial or other security of women workers, which an old mixed economy somewhat ensured, and which some of the developed nations still enjoy. Whatever growth of employment is happening is in the arena of self-employment, where again women are getting edged out due to not being taken too seriously in matters such as handling money. However, the silver lining is that even if the status of the Indian women worker is only getting worse, the women's movements are working harder and better to address these inequities, giving us some hope for the future.