Shawn Mendes thanks fans after 'Wonder' hit number one on charts

Shawn Mendes thanks fans after 'Wonder' hit number one on charts

Washington [US], December 15 (ANI): After his fourth album scored number one on the Billboard chart, Canadian singer Shawn Mendes, on Tuesday extended a thankful post for his fans.
According to Billboard, Mendes scored his fourth No. 1 album on the Billboard 200 chart, as his latest album, 'Wonder', broke all the records on the tally. The set earned 89,000 equivalent album units in the US in the week ending December 10, according to Nielsen Music/MRC Data.
Mendes shared a monochrome picture on Instagram which captures him dancing on air out of joy.
"Thank you so much for loving and supporting Wonder !!!" he wrote, using a red heart and glittering flashes of sparkles emoticons. 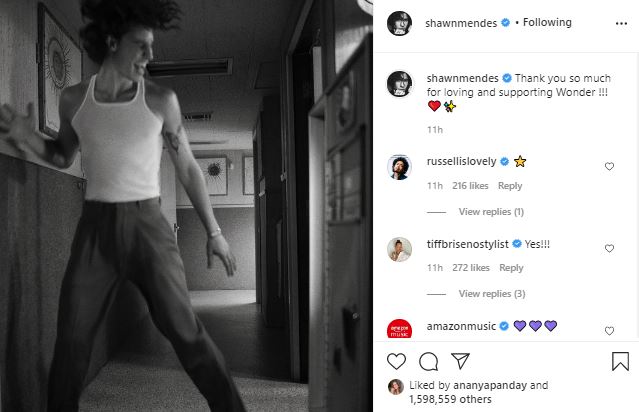 The post accumulated more than one million likes from his fans along with Bollywood actor Ananya Pandey.
The Billboard 200 chart ranks the most popular albums of the week in the US based on multi-metric consumption as measured in equivalent album units. Units comprise album sales, track equivalent albums (TEA), and streaming equivalent albums (SEA). Each unit equals one album sale or 10 individual tracks sold from an album, or 3,750 ad-supported or 1,250 paid/subscription on-demand official audio and video streams generated by songs from an album. The new chart showed Wonder bowing at No. 1, according to the official website. (ANI)