Shaken To Its Foundations 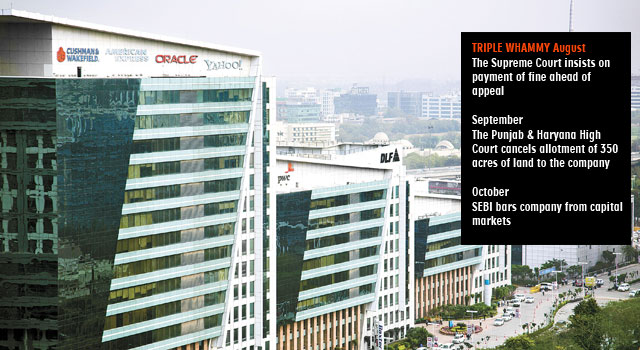 14 January, 2015
Print this article Font size -16+
After The Congress party was voted out of office earlier this year, real estate major DLF — rumoured to have been close to the party — faced a spate of setbacks. But what’s surprising is that the reversal in the company’s fortunes had nothing to do with the new ruling party. In August, the Supreme Court took a stern view of its appeal against a 2012 Competition Commission of India (CCI) order that fined the company Rs 630 crore for monopolistic practices. DLF wanted the apex court to waive a part of the fine that had to be deposited for it to be able to file an appeal. In September, the Punjab and Haryana High Court cancelled the allotment of 350 acres of land to the company by the Haryana government on charges of irregularity — Robert Vadra, son-in-law of Congress president Sonia Gandhi, was touted as a benefactor.
And then, in the unkindest cut of all, on 13 October, capital markets regulator Securities and Exchange Board of India (Sebi) barred it from the markets — extinguishing a lifeline for the company that was expected to heavily reduce its indebtedness — for three years. DLF’s ability to stay in business is a function of having enough cash to fund its operations. “For real estate developers, the game is all about funding,” explains Sunil Rohokale, CEO of ASK Group, a wealth management company.
DLF was found to have not disclosed a suit against one of its subsidiaries when it filed for an IPO in 2007. The FIR registered against the said entity pertained to an offence of the value of  a mere Rs 34 crore. But that now threatens the very operations of a company that clocked revenues of Rs 9,790 crore in 2013-14. The Securities Appellate Tribunal, which hears appeals against Sebi orders, is slated to take up the case on 10 December.
That said, nobody quite doubts DLF’s ability to survive the crisis. Only, after three consecutive blows, the critics now have their ears to the ground. DLF, after all, is not just another real estate company. It is the largest in the industry, and has a disproportionate share of the Gurgaon market, one of the fastest growing in the country. Another setback, and the empire could unravel.
The company owes Rs 19,994 crore in debt. In a letter to shareholders earlier this year, chairman K.P. Singh made special mention of the tax benefits recently made available to Real Estate Investment Trusts (REIT) to monetise the sizeable value of its properties which were so far only allowed to be leased out. The company had a leaseable area of 30 million square feet as on 31 March 2014. But Sebi’s order nullifies that option for the company as well as that of  commercial mortgage-backed securities, a route through which the company raised Rs 525 crore earlier this year.
To understand how cash-strapped the company is, one just has to take a close look at the action in the Supreme Court in late November. Required to pay Rs 630 crore to be able to appeal against the fine imposed by CCI, the company first offered to deposit land worth that much as security. When that didn’t work, the company deposited Rs 100 crore and agreed to pay the balance in instalments from January.

Right Or Wrong?
To the folks at DLF, it is just a matter of time before the appeals court overturns Sebi’s verdict. To them, the transaction in question — just ahead of the IPO filing, DLF transferred the ownership of its subsidiaries to people who were still very much under the control of the company (such as the wives of three senior management personnel) — is very much a part of how the industry works. A company official points out that in the real estate business, land is rarely bought in the company’s name as, by doing so, the prices shoot up with sellers of individual land parcels bargaining hard. So, acquisitions are made through land aggregators, which are mostly discreet subsidiaries. Sebi, he says, was not comfortable with the fact that purchases resulted in the value of assets not being fixed for any period of time, and wanted the company to have a more stable asset value at the time of the IPO. Thus began the process of alienating the subsidiaries from the parent. Selling to a third party would not have served the purpose, but selling to the relatives of employees would. By obtaining Transferable Development Rights in exchange, the company ensured that there was no threat to DLF’s sway over the land. According to him, the transaction did not in any way change the amount the company showed as assets, or the value.
Not everyone buys that argument. For starters, prudential accounting norms would still decree that an entity owned by the wife of a senior employee and to which the company still has development rights, be consolidated with the group’s accounts. According to Nikhil Singhi, partner at audit firm Singhi & Co, if an entity is owned or controlled by another entity, it is to be consolidated. Such control can be indirect as well. In this case, the fact that the assets were transferred to the wives of senior company employees would itself point to the fact that the company has indirect control.
The company official stresses that the transaction was vetted by four prominent law firms (AZP Partners, Luthra & Luthra and international firms White & Case and Linklaters), a slew of investment bankers, as well as the auditors of the company, Walker Chandiok & Co. The audit firm did not respond to an email asking why it did not flag off the transactions at that time.

Ripple Effect
Securities lawyers and real estate analysts are inclined to thinking that the company probably divested the entity for its nuisance value, the fact of having to disclose the legal case pending against it. But then again, the company did disclose several other lawsuits pending against it, running into over 50 pages. It is reasonable to ask whether anything could have been achieved by hiding one case of the value of Rs 34 crore. Others question the status of the land holdings involved. Land in Gurgaon has been under a cloud with the state government’s propensity to reclassify agricultural tracts as industrial, and then residential, seemingly on a whim. So, anybody who bought land cheap when it was classified as agricultural, would stand to benefit from the appreciation due to its reclassification as residential land.
It’s just that the company got caught in the act. But as violations go, non-disclosure of material facts to a prospective investor is a serious offence. Three years off the markets for DLF could have serious repercussions, not just for the promoters who most likely were aware of the transaction, but also the minority shareholders. The scrip, which was at Rs 220 on 11 July 2014, is now at around Rs 160 (5 December), a chunk of the fall (the price went down to around Rs 100 a share) coming the day after the Sebi order.
But as things stand, the company may at worst be hobbled by the triple whammy, not crippled. Another company official says the company’s understanding is that the Sebi order applies only to DLF, and that there is no bar on raising funds through its special purpose vehicles; that is, the entities through which each project is constructed (meaning ongoing projects will not be starved of funds). A securities lawyer, who did not want to be named, questions that interpretation, pointing out that Sebi had barred the company from raising money directly or indirectly.
But even if one were to take the worst-case scenario, DLF can still manage to tide over the crisis, says a company official. Growth, however, will be impacted, he admits. “Instead of growing at 25 per cent in our rental business, we will be stuck with 10-15 per cent. To that extent, the opportunity cost will be lost.”
He explains the numbers. The company’s commercial properties, which are leased out to tenants, will bring in an annual revenue of Rs 2,100 crore this year, and it is expected to go up to Rs 2,400 in FY15. That will be sufficient to meet the obligations of Rs 12,000 crore-Rs 14,000 crore out of its total debt of Rs 19,994 crore, he says. The balance will be serviced by residential property, which is expected to yield revenues of Rs 2,000 crore-Rs 2,500 crore this year. Even the analysts agree with this projection. ASK’s Rohokale says the only real impact will be the delay in turnaround. Doubts about the firm’s long-term survival are misplaced.
That said, much depends on the company’s ability to keep the cash coming to meet working capital requirements. With the capital markets no longer an option (till the court hearing), money will have to come via bank funding or sale of projects. Bank funding may come at a higher rate, but by most analysts’ estimates, the company is not that over-leveraged that banks will refuse funding. Sales of its properties, however, are a more difficult proposition. Going by the company’s own presentation, of the targeted 7 million sq. ft of sales annually, it has so far managed only a million this year.
Decceleration, Not Degrowth
What is DLF’s future? Analysts agree with the company’s view that the real impact will be on the rate at which the company grows. Few people see the possibility of an actual degrowth. None of the individual cases is seriously threatening. The CCI, mandated to ensure that monopolists do not take advantage of customers, found that DLF had changed the terms of its contracts after customers had paid a substantial advance payment, leaving them stranded. Many other real estate developers were accused of similar behaviour, but they got off the hook as none of them had a monopoly in their area. Perhaps, if the DLF case were to come up now, with increased competition in the market, it might get away too.
The allotment that the Punjab and Haryana High Court cancelled is a more complicated case. According to company officials as well as analysts, the company would not have developed the land in question for 10-15 years. So what the company stands to lose is the potential upside from its appreciation over time. On the flip side, it means an immediate cash inflow for the company as a consequence of the cancellation.
Cash is oxygen in the real estate business. For DLF, that supply has been threatened by the Sebi order. What perhaps works in the company’s favour is the debt-reduction measures it has been taking over the past couple of years. Nobody can argue that the company did not show any intent to reduce debt when it had the opportunity, says Rohokale. DLF’s intent may serve to keep investor confidence intact even as it strives to tide over the current crisis.
(This story was published in BW | Businessworld Issue Dated 29-12-2014)
Tags assigned to this article:
magazine cci real estate dlf kp singh abraham c mathews robert vadra magazine 29 december 2014