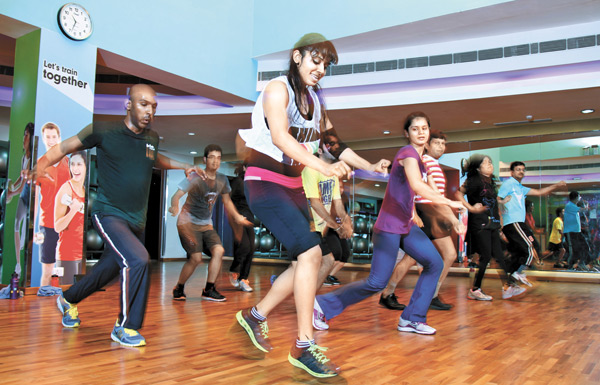 And follow they do. From college-going teens to their aunties and uncles, everyone shakes and turns and sweats it out. And the best part — they do so with a smile. "We have so much fun. I dreaded going to the gym but I really look forward to the Zumba class," Pallavi Jain, a Delhi University student, informs me while wiping sweat off her face. She claims she has lost weight in the three months that she has attended Zumba classes. "What's more, I have tried some of the steps I have learnt here at parties and they are such a hit." Now that's killing two birds with one stone.

The Zumba fitness craze began as an accident in the early 1990s when Colombian celebrity trainer Beto Perez forgot his usual music and had to improvise around the music he had in his car — traditional Latin salsa and merengue. The class was a huge success and Perez realised he was onto something big. Since then, Zumba's infectious, dance-infused blend of movements set to Latin and global beats has spread to 125 countries, with certified Zumba instructors working at thousands of locations worldwide. India alone has hundreds of instructors, not just in the metros, but also in smaller towns such as Jaipur and Secunderabad.

Zumba (Spanish slang for buzz like a bee) is a total body cardio and aerobic dance workout. "It's a moderate form of exercise, and anyone can do it. It's an overall workout great for general fitness," says C.J. Suarez, senior group exercise manager at Fitness First India. A typical 60-minute class incorporates elements of merengue, salsa, cumbia, reggaeton, and hip-hop, and features exotic rhythms set to high-energy Latin and international beats.

While head and shoulder rolls warm up the upper body and loosen the neck, rapid-fire footwork stretches the calves and strengthens the ankles. Latin dance's sultry moves also target your hips, firm up your abs and tighten your thighs and butt. And all this to Shakira, Beyonce and Lady Gaga's vocals.

Fitness exercise routines are sometimes woven in. "While 70 per cent of the choreography and music is provided by the company (Zumba), we experiment with the rest," explains Suarez. So don't be surprised if you hear Bhangra or Bollywood music or throw air punches, moving arms and shoulders and engaging your upper and lower body. Some instructors such as Delhi-based Zumba trainer Sachin Shaniya even include yoga postures for cooling down the body.

"It's important to come down to the pre-exercise position by stretching and doing relaxing moves. The aim is to increase your stamina and not to tire you out," says Shaniya.

While your dance moves may not be of the Jhalak Dikhla Jaa calibre, you will burn some serious calories. While dancing to Latin beats and chart-topping mixes, you'll torch between 600 and 700 calories per hour. The choreography consists of varied intensity levels that match the music's pace and type of movements, so Zumba challenges muscles, builds strength, and increases endurance. It also improves balance, tones muscles, reduces body fat and lowers blood pressure. Classes generally begin with a low-intensity song (for warm up), followed by one of medium intensity and two really high-intensity songs, before going back down to a low intensity song (for cooling down).

There's a simple principle behind Zumba: have fun while getting fit. So what are you waiting for, get up and join the party.