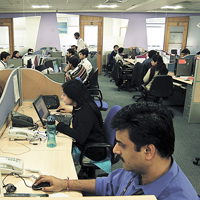 The HSBC services Purchasing Managers' Index, based on a survey of around 400 companies, fell to 54.2 in February from a one-year high of 57.5 in January. It was the biggest one-month fall in nearly a year.

While the February PMI fell for the first time since November, it has held above the 50 mark that separates growth from contraction since late 2011.

Services make up nearly 60 per cent of India's output and have been the lone bright spot in an otherwise sluggish economy that grew at its slowest pace in December in more than a decade. New orders flooded in at their fastest rate in 18 months during January but the survey showed the pace tailed off last month, with the sub-index dropping to 55.4 from 58.3.

Prices rose at a faster pace than in January and with costs also rising for manufacturers, that will keep upward pressure on inflation.

"Activity in the services sector grew at a slower clip led by a deceleration in new business," said Leif Eskesen, economist at survey sponsor HSBC, in a release.

After cutting the repo rate for the first time in nine months in January to 7.75 per cent, the Reserve Bank of India warned any monetary easing would depend on how quickly a high current account deficit and inflation could be reined in.

The wholesale price index, which is the main index gauge, has declined in recent months, most recently at 6.62 per cent in January. But it is still above the central bank's perceived comfort level of around five per cent.

The economy grew just 4.5 per cent from a year earlier in the quarter to December, government data showed last week, extending a slowdown that began at the start of 2012 and cementing expectations for decade-low growth in the current fiscal year.

In January the RBI cut its GDP growth forecast to 5.5 per cent from 5.8 per cent for the fiscal year ending in March.

While there is strong overseas demand for Indian services, renewed fears over the euro zone debt crisis after inconclusive Italian elections could put the brakes on exports and slow new outsourced deals for Indian software companies.

Still, firms were just as optimistic last month as they were in January.